WINDSOR – Longtime Bertie High School girl’s basketball coach Alice Lyons told the News-Herald on Thursday that she has been relieved of her duties with the team and will no longer coach the Lady Falcons on the hardwood. 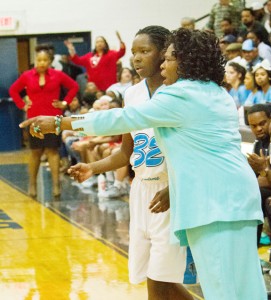 Alice Lyons, shown here with one of her players, has been reportedly ousted from her duties as head varsity girls basketball coach at Bertie High School. File Photo

Neither Bertie High principal Ricky Eley, Superintendent Elaine White, nor anyone with the Bertie school board, were contacted to confirm the firing as of late Thursday evening.

Lyons, who won her 700th career game as a coach just this past season, first came to Bertie in 1984 after stops at Hertford County High School and her alma mater, North Carolina A&T State University in Greensboro. She retired from coaching and teaching Physical Education at the school in 2012, but was brought out of retirement a year later and has headed the girls basketball program ever since.

“I had a girl that just played in the East-West All-Star game (Fayetteville State-bound De’Najah Porter), a girl who plays in the WNBA (former Bertie and UNC player, Jessica Breland, from Kelford), I won the conference, I won tournament (games), and I worked with my girls all summer to get fired,” Lyons said in an interview late Thursday afternoon.

Lyons said the firing was not a total surprise, as she had spoken with Eley at the end of last season and later this past summer and at that time she says she was told a coaching change was in the works.

“It’s not personal, he said,” according to Lyons. “We were told at the end of the season that he was trying to hire someone then; but the (junior varsity) coaches are still there.”

Lyons says she plans to fight her dismissal.

More information on this story will be available online Friday, Aug. 21, and in the Saturday Aug. 22 edition of the News-Herald.