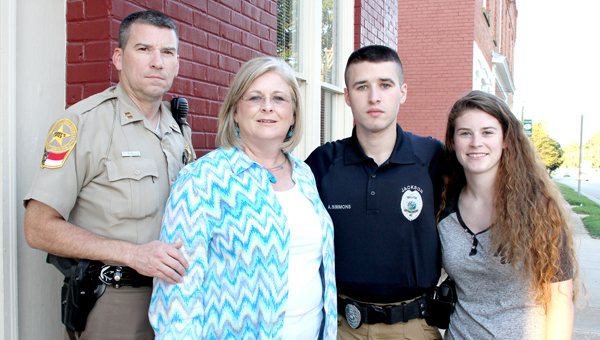 Jackson Police Officer Austin Simmons (second from right) is shown here with his parents, Brian and Lou Ann Simmons, and sister, Kelli (far right). The young officer was commended for his actions at the scene of a motor vehicle accident on July 20. Staff Photo by Cal Bryant

However, to 25-year-old Austin Simmons, that document just may serve as an omen of bigger and better things to come.

A mere three months into his career as a law enforcement officer, Simmons, a rookie Patrol Officer with the Jackson Police Department, received a letter of commendation from the Northampton County Sheriff’s Office for the actions he took on July 20 when responding to the scene of a motor vehicle accident.

The letter was presented to Simmons on Wednesday by Jackson Police Chief John Young during a scheduled meeting of the town’s Board of Commissioners. Also present were the young officer’s parents, Brian and Lou Ann Simmons, and his sister, Kelli; along with other Jackson Police officers. 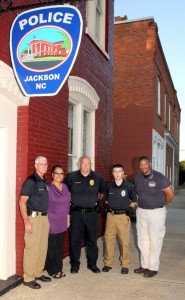 The letter of commendation came from Patrol Sgt. Alan “Bo Bo” Roye of the Northampton County Sheriff’s Office. Simmons was performing part of his ongoing training – a ride-along program with a seasoned officer – as offered by the local Sheriff.

“This is a supplemental part of Austin’s training to prepare him to go out on his own,” said Young. “Austin has only been with us for three months, but in that short period of time he has performed at a level that warrants an accolade such as this.”

The commendation from Sgt. Roye reads: “On July 20, 2015, Officer Austin Simmons was training with me in accordance with the Northampton County Sheriff’s Ride-Along Program. At 10:30 a.m. we were dispatched to a wreck on Mulberry Street in Woodland. The vehicle had reportedly turned over with the driver entrapped. Upon our arrival, EMS and Fire (Department) had already extricated the driver, performing CPR on him. Officer Simmons assisted EMS and Fire with CPR on the victim. Officer Simmons acted in a very courageous and professional manner and I commend him for a great work ethic. You should be proud to have such an asset on your staff.”

“We’re very pleased to have you as the newest member of our Police Department here,” said Jackson Mayor Jim, Gossip. “We take great pride in our Police Department and we always have. We feel like the high quality of life that we enjoy here in Jackson starts and ends with public safety. You are fitting in quite well with what we try and do here and we thank you Austin for your efforts.”

Young said the Ride-Along Program offered by the Northampton Sheriff’s Office exposes young officers such as Simmons to a broader range of law enforcement practices.

“Austin needs to see that early in his career,” Young noted. “And he has done just that. Recently he was involved in a case where a man from Pennsylvania was wanted on a fugitive warrant. Austin was part of that effort as we made the arrest out in the county. He performed well in that case.”

Austin Simmons follows in the footsteps of his father, a retired North Carolina Highway Patrolman now working for the Northampton County Sheriff’s Office where he just recently was promoted to Captain.

“When Austin told me he wanted to go into law enforcement and when John told me that he would hire him, I knew right then and there that Austin would be trained right,” said Brian Simmons. “Before I joined the Highway Patrol I was trained by an officer just like John Young, one that knew the ins and outs of being a policeman….how to talk to people; how to deal with people. John can teach Austin that.”

Young, who instructed his future officer while Austin was enrolled in the BLET (Basic Law Enforcement Training) program at Halifax Community College, said the younger Simmons has already experienced a wide variety of law enforcement activities in his short three months in the department.

“He’s been to domestic calls, fights, B&E’s (breaking and entering cases) and the like,” said Young, referencing calls throughout the county and not in the town of Jackson. “In three months he’s seen things that might normally take a new officer a year to experience.

“When Austin was doing his ride-along with Bo Bo (Sgt. Roye), he was gaining loads of experience,” said Brian Simmons. “He’s seen how law enforcement is handled from start to finish. He’ll be able to use that experience here in town. When you tell someone how to do a job, they’ll forget half of it, but if you show them how it’s done then that experience sticks with you.”

Simmons, employed now as a part-time officer, said he feels very fortunate to work in such an environment, one where hands-on experience is vital to his development as a police officer. However, he strives for improvement along another path as he plans to further his education in law enforcement. He has enrolled at Chowan University and will soon start classes as a Criminal Justice major. With his previous college work, he hopes to finish in two years. 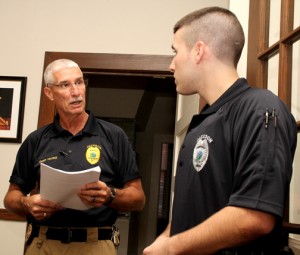 “Chief Young told me he will gladly work my schedule here in Jackson around my class schedule over in Murfreesboro,” Simmons said.

His life’s ambition is to work at the federal law enforcement level.

“I don’t know which agency just yet, but I do aspire to work at that level,” Simmons said. “I’ve got some time to study which one of the federal agencies will fit me the best.”

Simmons didn’t start off in law enforcement. His initial interest was in auto mechanics. He holds an Associate’s degree in Automotive Technology from Halifax Community College.

“I worked at an auto shop up on Lake Gaston for two years; something just hit me one day that this line of work just wasn’t what I really wanted to do,” he noted. “I didn’t want to waste my time or the time of the man I was working for at that time. I guess after being around my father and all those other law enforcement officers over the years, law enforcement was in my blood.

“It’s exactly what I thought it would be,” said Simmons of being a police officer. “It’s something I want to do for the rest of my life. You have to have that mindset of wanting to put yourself in a position where you might have to step in-between two people that are fighting, or put yourself in a situation that you may not be comfortable with, but as a sworn officer you are there to help somebody else. This is a job you can’t take lightly; you’re here to help people, help your community.”

Simmons has definitely found his calling and used a well-known statement concerning his current and future career in law enforcement: “They say if you love what you do, then you’ll never work a day in your life. That’s true as I love this job.”

Perhaps the same can be said for Chief Young and the other seasoned members of his department. Young used the opportunity in front of the Jackson Town Commissioners on Wednesday to inform them of the vast experience of the officers on his staff. He said those officers have a combined 125-plus years of service – newly promoted Chief Detective Brenda Burnette (from Lt. Detective) with 31 years of service; newly promoted Lt. Detective Greg Colson (from Sergeant) with 23 years; newly promoted Sgt. Ricky Morris (from Patrol Officer) with 27 years; and Lt. Tony Burnette (21 years). Young has spent 27 years in law enforcement.

“That’s a lot of experience; so much to the point that when I go on vacation I don’t have to worry about anything,” Young stressed. “These seasoned people know what to do.

“Brenda has recently solved five different cases for five different towns; all those cases came into our department, but she ran with them and solved them; as we say she blood hounded those cases,” the Chief added.

“I think we’re the smallest department in the state with such a seasoned detective in Brenda Burnette,” bragged Mayor Gossip.

“Thanks to you all for what you do, not just for Jackson, but for the whole county,” said Jackson Commissioner Jason Morris.

“Our town is blessed to have experienced and seasoned officers,” Young stated. “I can’t take the credit for that; this groundwork was laid a long time ago, starting with (former Police Chief) Willard Lassiter. A lot of what I do today with our department isn’t much different than it was when I started. If it’s not broke, don’t try to fix it.”

Austin Simmons is certain that he’s landed in just the right spot to launch his career in law enforcement.

“As a young police officer I’m very fortunate to be surrounded by some of the best in the business here at the Jackson PD and across the street with (Northampton) Sheriff (Jack) Smith and his staff. As far as being commended for my work and for the incident back in July, I was only doing what I was trained to do,” Simmons concluded.