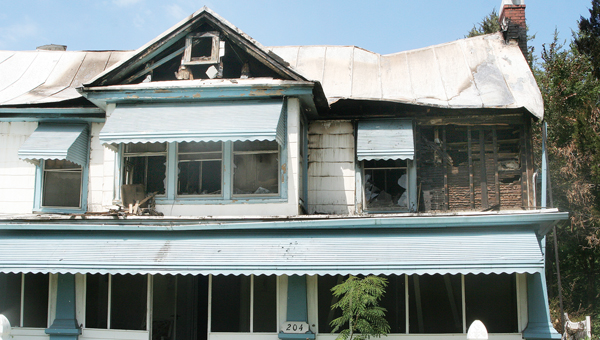 A mother and her three daughters were not at home Tuesday night when a fire erupted at their home on Main Street in Winton. Staff Photo by Gene Motley

WINTON – An early morning inferno here destroyed a stately wood frame house and has left a family of four homeless.

Winton Fire Chief Will Liverman said units were dispatched at 1:24 a.m. Tuesday to 204 S. Main Street, Winton, after receiving reports of a house fire. When the firemen arrived, flames were leaping from the second floor windows.

Liverman said a search revealed that no one was at home at the time of the blaze, but the occupants did arrive on the scene a short time later while the firemen were battling the blaze.

Teneisha Smallwood lived in the home with her three children, a toddler and two teenage daughters. The house was owned by Mary Harrell.

Despite the efforts of the firefighters the home was unable to be saved and declared a total loss. Firemen remained on the scene until 8 a.m. Tuesday making certain there was no re-kindle.

“The house was balloon construction so the studs from the floor to the attic are like a chimney,” Liverman said. “Coupled with a tin roof, the age of the house and additions that had been added on over the years, it was a pretty tough blaze for us to battle.”

Liverman said preliminary indications are the fire was unintentional, but an investigation is still ongoing.

Assistance was also given by Hertford CountyEMS as well as law enforcement personnel from the Winton Police Department and Hertford County Sheriff’s Office.

“We had two ladder trucks, one from Ahoskie and another from Murfreesboro,” said Liverman.

The fire occurred across the street from Winton Public Works and WPW Director Carl Pierce sprang into action: assisting in the fire fight with rehab for exhausted firemen as well as traffic control.

“We really appreciate everyone’s assistance,” added Liverman. “Without everyone working together, we’d have had nothing.”

In addition to assistance from the American Red Cross, Faith, Hope & Deliverance Ministries on W. Joyner Street in Winton is asking for donations from the public to aid the family.

“I was recently informed that Mrs. Smallwood and her family lost their home and all their personal items this morning in the town of Winton,” said minister Apostle Keith Urquhart. “They are in need of clothing in the following sizes: a toddler size for a girl and toddler’s shoes in size 11-12.

“Also needed are one teenage female shirt size large and pants/dresses in 18-Junior. The other teenage girl wears a large shirt and 16 regular pants/dresses,” Urquhart added. “Let’s come together and let them know that they are cared for by the community and that God has people on earth to help others out in time of need.”