WOODLAND – The signs speak louder than any words.

For those traveling along US 258 in eastern Northampton County, you may have noticed two new billboards. Both carry the same message concerning a missing person case that is now over 50 years-old.

For William “Buddy” Powell, while the billboards keep some hope alive for his family over the disappearance of his sister, Phyllis Lorrain Powell, seeing those signs on a daily basis brings back many painful memories. 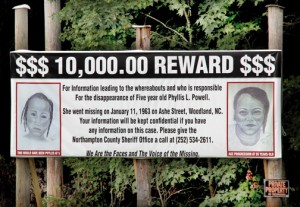 This is one of two billboards recently erected along US 258 in Northampton County. Both bear the message, and reward information, of a case involving a young Woodland girl who disappeared in 1963. Staff Photo by Cal Bryant

“The billboards serve a purpose of keeping this case open in the minds and hearts of those living in our area,” Powell said. “But at the same time it hurts my heart; my heart is still empty not knowing what happened to my baby sister.”

Phyllis Powell, age 5 at the time, went missing on Jan. 11, 1963. She and her older sister, Joyce Powell Parker, who now resides in Ahoskie, were washing clothes at the home of a Woodland neighbor, Molly Lassiter, when little Phyllis asked her older sibling for permission to go outside and play.

“I never thought that would be the last time I would see my little sister,” said Parker of that fateful day 52 years ago.

Phyllis disappeared at around 12 noon that day while playing in the area of NC 35 and Ashe Street in Woodland. Despite a massive search on the ground and in the air involving over 200 individuals, there were no clues discovered on the little girl’s whereabouts, other than a set of small footprints found in an area bordered by a thick woods about one mile from where she went missing.

“Our family still waits for an answer on what happened to Phyllis,” said Buddy Powell. “We felt the billboards would help remind folks that this case is still open, as are the cases of seven more people that have gone missing in recent years in Northampton and Halifax counties.”

Powell said he couldn’t sleep the night after the billboards were erected – one north of Woodland and the other south of Rich Square.

“All I could think about was Phyllis; I just tossed and turned all night long thinking about her,” he said.

For Parker, she just cannot fathom anyone taking her little sister.

“The street we lived on was where she knew everyone by their name. As a matter of fact, everyone living on that street back then was either members of our family of were close friends with our family,” Parker said.

Parker said despite her sister being only five years old at that time, she was extremely smart for her young age.

“Phyllis would have never got in a car or went anywhere with a stranger, not unless she was forced to do so,” Parker stressed.

“Joyce knew it wouldn’t be a problem because of the area that Phyllis was going to play was surrounded by houses owned mostly by family and friends,” said Buddy Powell, who still resides in Woodland. “Little did Joyce or any of us know that within an hour Phyllis would be gone; she just vanished. To this day all I’ve ever wanted is to find out what happened to my little sister.”

When asked if anyone heard a car passing by on the morning that little Phyllis went missing, Powell said there was typically very little vehicular traffic on that street in 1963.

“There were only two men who had cars that lived on that street back then,” he recalled. “Most of the men who lived there would walk to work at the casket companies or the basket mill that operated back then in Woodland and George.’

Despite the agony suffered by the Powell-Vinson family for the past 52 years, they harbor no ill will towards the person or persons responsible for their loved one’s disappearance.

“I have never wanted anything but the truth,” said Parker. “I feel the pain of other people that have loved ones who have gone missing and haven’t been found. I don’t want whoever is responsible for my sister’s disappearance to be punished.

“God sits high and looks low,” she continued. “He sees and knows all. One day, whoever is responsible will have to stand before God and will be held accountable for every deed done in your body, whether it’s good or bad. It’s better to get it right here on Earth because you sure can’t get it right up there as God will be the final judge.”

“To whoever is responsible for what happened to our sister, my family has no hate in our hearts for you,” Buddy Powell stressed. “No matter what happened we forgive you, but please understand that we need to know what happened.”

He added, “To carry this weight in your heart for over 50 years, that has to be hard. So we ask you to take this weight off your heart. The Bible tells us that the truth gives life and the truth will set you free.”

There is a $10,000 reward for information leading to the whereabouts of Phyllis Powell. That information can be shared anonymously by calling the Northampton County Sheriff’s Office at 252-534-2611.

Two years ago, on the 50th anniversary of Phyllis’s disappearance, Diana Trepkov of Canada, a Certified Forensic Artist through the International Association for Identification, became involved in the case. Based upon recollections by the family (there were no known photos of young Phyllis), Trepkov penned a likeness of Powell at age 5 and then an age progression likeness at age 55. Those two drawings are used on the newly erected billboards.