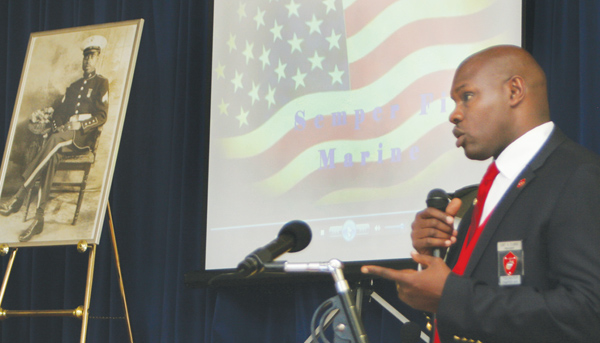 A photo of Rev. Andrew Felton is displayed onstage (left) against a patriotic backdrop as retired US Marine Curt Clarke of the Montford Point Marine Association reads a tribute honoring Felton with the Congressional Gold Medal at the C.S. Brown Cultural Arts Center. Staff Photo by Gene Motley

“It matters not about ones birth or race; if a man is rich in faith, love, and grace…”

WINTON – Annie Vaughan Felton wrote those words as tribute to her late husband, the Rev. James Andrew Felton nearly 50 years ago.   A half-century later Felton received an honor befitting such eminence as the Tidewater chapter of the Montford Point Marine Association presented the Congressional Gold Medal and Certificate of Status posthumously to his family here on Aug. 1.

In 2012, Congress authorized the Congressional Gold Medal to be awarded to each of the 20,000 Montford Point Marines, or to their families, in recognition of the accomplishments and sacrifices made by those Marines during a time of segregation.

These were the first African-Americans to serve in the U.S. Marine Corps. They got the name because of their segregated training site at Montford Point, located at the tip of Camp Johnson on the New River in Jacksonville, NC.

The ceremony for Felton was held at a place also befitting and in acknowledgement of his civilian life’s work: the C.S. Brown Cultural Arts Center and Museum, a facility he helped establish in 1986. 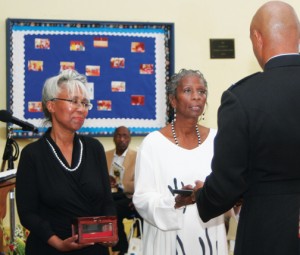 Felton was an author, teacher, pastor, counselor, and civic leader active in Hertford County in the 1960s and founder of the People’s Program on Poverty (PPOP), an African American organization created to study and fight poverty at the grass-roots level in northeastern North Carolina.

“They paved the way, and we stand on their shoulders,” said retired Marine Curt A. Clarke, president of the Tidewater chapter of the Montford Point Marine Association, who oversaw the ceremony. “They are the ones who made the sacrifice because they had to fight for the right to fight.”

Felton enlisted in the Marine Corps following his college days at Elizabeth City State University (nee Teacher’s College) in 1943, one year after the 1942 directive from President Franklin D. Roosevelt that gave African Americans the opportunity to be recruited into the Marine Corps, the last branch of the armed services to desegregate.  After undergoing his training at Montford Point – because the black Marines were not allowed to train alongside white Marines at nearby Camp Lejeune during World War II – he was then shipped out to the Pacific where they all fought courageously against fascism.

“Theirs is a history that changed American,” Clarke added.

Following a piano interlude of patriotic tunes by John Eley, the service began with the presentation of the colors by a Marine Color Guard from Oceana Naval Base in Norfolk.  The National Anthem was sung by Shawnee S. Ball, a Washington, DC-based opera singer, and one of Felton’s former students.

“Remember your leaders, who spoke the word of God to you,” Perry read from the New Testament. “Consider the outcome of their way of life and imitate their faith.”

Clarke followed with a brief history, including a video, of the Montford Point Marines, and the legacy of the honor bestowed on Felton.

“Mother Teresa, Thomas Edison, these are just a few who have received this honor,” Clarke said. “All Montford Point Marines have earned this honor; and with this we pay them back and let them know how important they are to us.”

Congressman G.K. Butterfield could not attend the service in person, but sent a video tribute and a representative.

The highlight of the ceremony was retired Sgt. Maj. Willie Perry and Lt. Col. Jason Davis, Officer for MARFORCOM in Norfolk, presenting the Gold Medal and a framed Certificate of Status to Felton’s daughters, signed by former Marine Corps Commandant, Gen. John Amos.

“I think the Montford Point Marines represent our legacy,” Davis said. “Not only the legacy of the Marine Corps, but also of the nation.”

Before adjournment, Felton’s daughters gave a short tribute to their father in thanking the Marine Corps and the more than 70 persons who attended the ceremony.

“It’s a great honor for anyone to give their service to our country and knowing what my dad did was a great gift,” said Michele Felton, his youngest daughter, speaking on behalf of her family.