WINTON – They were hand-picked, with a legacy in military history akin to the Tuskegee Airmen.  But they weren’t airmen, they were Marines.

In keeping with that armed forces branch’s tradition, a special US Marine Corps ceremony will take place Saturday, Aug. 1, at 12 noon, at the C.S. Brown Cultural Arts Center, and it will be to honor a special Marine with Roanoke-Chowan ties.

The late Rev. James Andrew Felton, Sr., a Hertford County author, teacher, counselor, minister, and civic leader who died in 1994, will be honored by the Montford Point Marine Association in a Certificate of Status and Congressional Gold Medal ceremony. 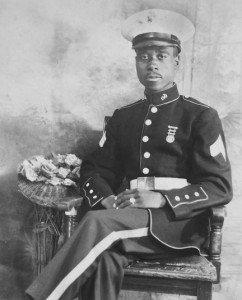 James A. Felton, Sr., a Winton educator, minister, and civic leader, poses in his Marine Corps dress blue uniform in a photo from 1943. Felton, who died in 1994, was one of the original Montford Point Marines, an all African-American unit who served in WW II. Felton will be honored Saturday in a program at the C.S. Brown Cultural Arts Center. Photo Courtesy / University of North Carolina

The ceremony will honor Felton, posthumously, for his service to the Marine Corps and to his country.

Felton was an educator who taught in the Hertford County schools system for over 20 years. He, along with Rev. John Scott, former pastor of New Ahoskie Baptist Church, was  founder of the People’s Program on Poverty in the 1960’s, an African American organization created to study and fight poverty on the grass-roots level in northeastern North Carolina.

Through his work in this program, Felton also founded the first Family Training Center in the United States. During this time, he was also actively involved in organizations such as the President’s Commission on Rural Poverty, the North Carolina Family Life Council, and a local chapter of the National Association for the Advancement of Colored People (NAACP).

Felton was also instrumental in the restoration and establishment of the C.S. Brown Regional Cultural Arts Center and Museum, which opened in Winton in 1986.

But more than Felton’s civic contributions in Hertford County, many of which are documented at the C. S. Brown Center, he will be honored for his contributions to his country through his armed service.

One of the first of the Montford Point Marines, Felton enlisted following his college days at Elizabeth City State University (nee Teacher’s College).  This was one year after the 1942 directive from President Franklin D. Roosevelt that gave African Americans the opportunity to be recruited into the Marine Corps, the last branch of the armed services to desegregate.

These men, from all over the United States, weren’t sent to traditional boot camp at Parris Island, SC or San Diego, CA, but instead, black Marines experienced basic training at Montford Point – a facility located at Camp Lejeune, NC, near Jacksonville.  Approximately 20,000 black Marines received basic training there between 1942 and 1949.

While the new training facility was undeveloped along the banks of the New River, infested with mosquitoes and snakes, it showed the troops no less mercy than the harsh treatment and humiliating insults they received from the white officers.  Still, they persevered and served the nation with bravery, dedication, honor and pride and became known forever as “Montford Point Marines”.

When President Harry Truman ordered the full integration of the armed forces in 1948, Montford Point closed as a military training facility one year later.

In 1974, Montford Point Camp was renamed Camp Johnson, in honor of the late Sergeant Major, Gilbert H. “Hashmark” Johnson, one of the first African Americans to join the Corps. Johnson was a distinguished Montford Point drill instructor and a veteran of World War II and Korea.  Camp Johnson remains the only Marine Corps installation named in honor of an African American.

Thirty eight years later – and 74 years since Roosevelt’s directive – in 2012, President Barack Obama and the U.S. Congress acknowledged the Montford Point Marines in a special ceremony in the nation’s capital.

Michele Felton, one of Felton’s six children said, “After all these years it’s good that the Montford Point Marines are being recognized for service to their country and to the world.

“It also just falls true that in my father’s case, he believed in service to humanity; and that has been realized and can be seen throughout our community,” she said.

Felton said it’s good that the ceremony for her father is being held at the C.S.BrownCenter.  The elder Felton, in 1980, established the C. S. Brown School Auditorium Restoration Association to restore Brown Hall, a building that had been part of the campus of Chowan Academy, an African American school founded in 1886 by Calvin Scott Brown. The C.S. Brown Regional Cultural Arts Center and Museum opened 100 years after the founding of the school, in 1986.