INDIAN WOODS – It took 300 years, but the Tuscarora Native American tribe finally came home to Indian Woods in a return to Bertie County.

And what a grand homecoming it was. 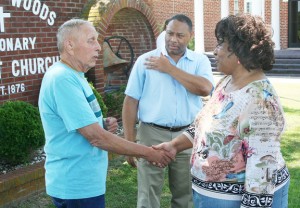 Sunday, more than 50 members of the Tuscarora Indian tribe from a reservation located in the Niagara region of New York – ironically, in a town named Lewiston – were celebrated at Indian Woods Missionary Baptist Church, mere miles from where one of the largest Native American reservations in the Tar Heel state once stood.

The program for the modern Tuscarora, and the luncheon that accompanied it, capped a four-day weekend that began for the tribe in New Bern.  There they met for the second time in two years to celebrate and reflect on the tribe’s history in North Carolina.

The New York Tuscarora were led by Chief Leo Henry of the Turtle clan, the largest tribe on the Lewiston, NY reservation. The Chief said they came to North Carolina to teach people here his culture, as well as the tribe’s younger members learning about their history.

“Everyone should travel and see where their grandparents and so forth lived and what they had to go through; and be thankful of what they have today,” Chief Henry said.

The rich history of the Tuscarora in North Carolina dates back to the 16th century and the era of the Lost Colony when they were a northern and a southern tribe.  Before the coming of Europeans, the Tuscarora had been the most powerful tribe in eastern Carolina, controlling most of the land between the Roanoke and Neuse rivers. 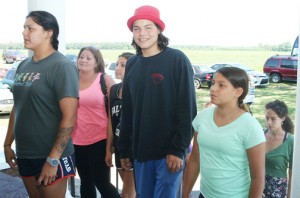 Young and older Native Americans enter Indian Woods Baptist Church. The Tuscarora tribe once had the largest reservation in North America only a few miles from the church location. Staff Photo by Gene Motley

The Tuscarora Wars in North Carolina began in 1711 with the natives opposing the European colonists, often with attacks on settlements.  In the fall of 1711 the Tuscarora captured members of the settlement at New Bern, forcing the colonial government to strike back.  The decisive battle came in March 1713 at the stronghold of Fort Nooherooka, near Snow Hill in Greene County, where over 900 Tuscarora – nearly one-third of the nation – were killed when 1,000 native men, women, and children refused to surrender.  The war ended in 1717.

As a reward for aiding in the war, the colonial government gave the northern Tuscarora 53,000 acres north of the Roanoke River in what is now Bertie County. The area came to be known as Indian Woods.

Those Indians who declined to settle in Indian Woods left North Carolina, migrated north and settled in northern New York state, eventually joining the Five Nations of  Iroquois Indians in that area.

Later, in 1828, the Tuscarora remaining in North Carolina gave up their title and rights to Indian Woods and moved to other parts of the Carolinas and Virginia.

Sunday, as the tribe’s bus journeyed north for their return trip, the tribe enjoyed stops at other Native American sites, including Contentnea in Wilson County and Moratoc in Martin County near Williamston.  Later they crossed the Roanoke River for the last and possibly most important stop at Indian Woods, which was the site of the first Indian reservation in North America. 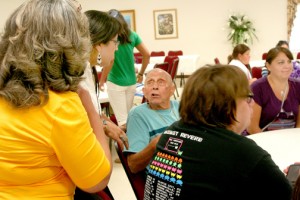 “It’s been a full weekend,” said Vincent Schiffert, a high school teacher who served as the tribe’s ‘unofficial’ historian and spokesperson.  “We put together a full program to show people who we are with speakers and some demonstrations by everyday folks who are involved in certain cultural things and traditions in our community.”

Schiffert said the demonstrations on Saturday included tribe members making dolls out of corn husks and belts out of leather and beads that the participants could take home with them.

Among the Friday activities were visits to monuments, to the genealogy workshop by the Family History Society at East Carolina University.

“It’s been a real hands-on experience for us to experience our homelands,” Schiffert noted. “We’re getting out into the streams, into the water and into the woods.

“The Tuscarora actually leased the Indian Woods land to North Carolina beginning in 1803 before they finally surrendered all rights to the land 25 years later,” Schiffert said. “We’ve always known North Carolina was our homeland and that there was this 100 year period when Indian Woods was our first reservation.  We’ve also always had someone who would come down from New York and talk about making some new friends and take some pictures; so we always had some generation getting first-hand knowledge and bringing it back to the rest of us.”

At the church, Indian Woods’ pastor-elect Rev. David Moore welcomed the group following service and spoke about the benefits of learning about other cultures, especially in one’s own back yard.

Thelma Adamson acted as hostess for the visitors, and arranged many of the Indian Woods activities along with a special ‘native son’, North Carolina A&T State University History Department chairman, Dr. Arwin Smallwood, who is a BertieCounty native and has written extensively on the history of Indian Woods. 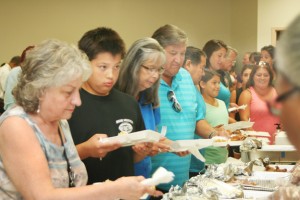 “I’m overwhelmed still,” said Smallwood. “I’m still trying to take this all in.  It’s a first that’s never been done before.  This is the first time in 300 years that the Tuscarora have come back to Indian Woods since leaving during the Tuscarora Wars.”

Smallwood has authored several publications on the Tuscarora and plans two new books, including one that will focus on the current families that are descendants of the original tribesmen and still reside in the Bertie County area.

Schiffert said there are currently around 1,000 clans on the current Tuscarora reservation in New York; among them, the Turtle clan – with Chief Henry – is one of the most prominent.

“We are the People of the Long Horse, or the Haudesaunee,” the chief proudly proclaims.

Following a meal that included several native Bertie County dishes, and a prayer for safe journey from the Indian Woods Church members, the group departed back for upstate New York.  Certainly this had been a weekend with memories and activities for them to carry for generations; well beyond another 300 years.