MURFREESBORO – If the calendar is about to flip from July to August, then it’s their time to shine!

Percy Bunch began growing watermelons as a hobby farmer in the late 1950s, little did he know at the time that his watermelon growing career would span over 50 years. 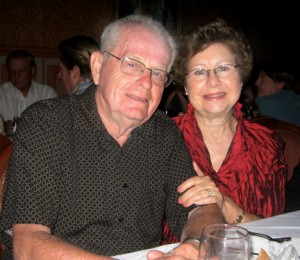 Percy and Frances Bunch of Murfreesboro are two of the mainstays behind the success of the North Carolina Watermelon Festival that begins tomorrow (Wednesday) in Murfreesboro. Contributed Photo

His watermelon wholesale business, Murfreesboro Farms Inc., officially opened seasonally in 1973 on Union Market in Washington, DC. Bunch and his wife, Frances, moved the business back to their hometown in Murfreesboro in 1984. Percy was president and general manager of the company until he retired in 2009 at which time his son, Michael Bunch, took over the operation and continues to do so today.

“Percy was so pleased when the Association dedicated a convention in his honor,” said Mrs. Bunch. “His proudest accomplishment was starting the North Carolina chapter. I helped organize the North Carolina Queen program – we had two national queens and two runners-up.

After going to the convention the first time alone, Percy called me and said it was really great, ‘but no where to be by yourself’,” she added. “After that we went together to every convention. It didn’t take long to make friends with everyone. When Percy was the President of the Association, he visited every single chapter. The Association is a network and a half. Don Hiller calls Bunch, ‘Dad’ and some of our watermelon friends are now US Senators.”

Percy Bunch will be 84 years old in October and has served in the National Watermelon Association for over 30 years. He currently sits on the Association’s Lifetime Council.

The Bunches enjoy traveling and spending time with their children and grandchildren.

Although in retirement, Percy and Frances are still actively involved in the North Carolina Watermelon Festival and invite everyone to join them in Murfreesboro July 29 through August 1 for this year’s celebration.

“Hay-Day” at the Fairgrounds