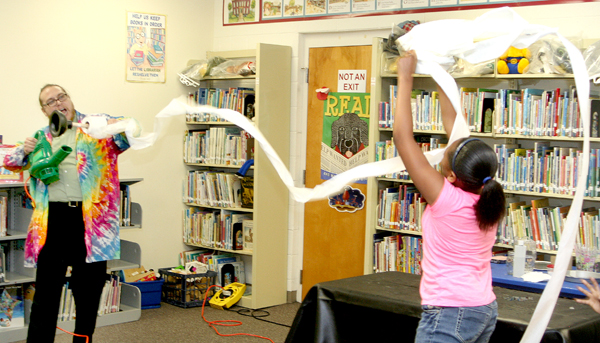 Ternica Mitchell (right) assists Joshua Daniels with another science experiment at the Hertford County Library. Scienetellers say they want the kids have fun when they participate in the lessons. Staff Photo by Gene Motley

WINTON – One moment they’re wide-eyed with wonder, and in another instant they’re squealing with laughter.

A group of a dozen children, along with several adults sprinkled in, watch and participated as a performer in a multi-colored smock entertains as well as educates them about science with exaggerated stories and experiments that seem to resemble magic. 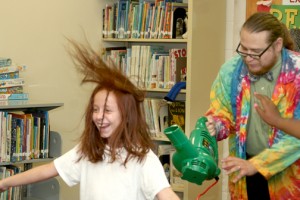 They are called “Sciencetellers”, an 11-year old nationwide interactive story-time program, which visited the Hertford County Public Library here Thursday morning.  Joshua Daniels, who describes himself as part-actor, part-‘science nerd’, holds the rapt attention of everyone aged five to fifty as they watch him perform.

“This job really appealed to me when I applied for it a year ago,” said Daniels, after the performance.  “I’ve always loved science as a kid; while other kids were watching ‘Transformers’ and ‘Teenage Mutant Ninja Turtle’, my afternoons after school had me glued to PBS watching ‘Bill Nye the Science Guy’.”

Sciencetellers use their manic energy as stage performers and combine it with interactive participation and storytelling to teach science to their young audience. Children begin while seated on the floor, but once recruited quickly jump up to assist in the performance.

Sciencetellers was founded in New Jersey, traveling to schools, libraries, even birthday parties to get children interested in science.  The best part of the performance has to be making the kids feel special.

“You should be happy to be here,” Daniels tells the kids. “It’s a gorgeous day outside and you don’t have to go to school.” 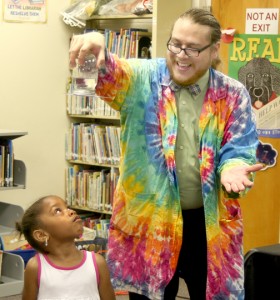 Joshua Daniels shows Shatriece Hamilton an experiment on the effects of water pressure and gravity as he displays a jar of water above her head held in place with just an index card. Staff Photo by Gene Motley

Resplendent in a tie-dyed lab coat, Daniels interweaves demonstrations, jokes and asides into his storytelling.  At first quiet and reticent, the children begin to slowly warm to what becomes a fun morning, and no one leaves before it’s done.

“The kids really love it because it’s great.  They were a little intimidated at first, and that can happen when you get very, young children,” Daniels said.

The inclusion and participation of the children seems to lighten the morning as Daniels begins his experiments.  With the aid of five-year-old Shatriece Hamilton as his first ‘assistant’ he demonstrates the theory of atmospheric pressure by filling a cup with water, covering it with an index card, and after applying slight pressure to the top of the container, then he flips it upside down above the child’s head without spilling a drop.

The other children sit back, their faces aglow with amazement.

“I’ve had a lot of experience performing in front of young children from my days in children’s theater,” Daniels claims.

Several more experiments – all with child participation – keep the young ones enthralled for the duration of the 45 minute show, in which they learn about the scientific likes of condensation to evaporation; each time the Scienceteller weaves a tale that entwines the education with the methodology.

“The story is such an important component to what we do because it engages the children,” Daniels says. “It’s the mortar that holds the bricks together; the bricks being the science. It then becomes approachable, fun, and something they would like to do.” 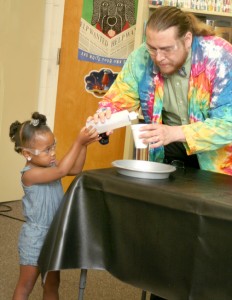 Jaiden Smith assists Joshua Daniels with an experiment on evaporation by pouring acetone onto styrofoam. Both wear protective goggles to prevent an accidental eruption. Staff Photo by Gene Motley

While the Winton group was a quiet crowd, they slowly began to warm to Daniels’ tales. His exaggerated facial expressions and other theatrical maneuverings and interactions with his young audience seem to thrill the children and perhaps ease some of their reserved behavior.  With each tale, Daniels gets louder and louder, and more and more excited, as his stories unfold.

The average ages of the children in these audiences are kindergarten through 8th grade. ‘Part scientist and part storyteller,’ once engaged, Daniels chose his ‘assistants’ at random, waiting for once reluctant volunteer hands to thrust into the air now wanting to be picked.

“I think that the science industry and all its related fields is something that’s really important,” Daniels declares. “Things like this make the kids more conscientious of environmental issues, conservation and things like that.  Plus, it’ll help with the medical industry; I mean science is everywhere.”

Daniels says he has a full schedule through the fall, sometimes doing as many as three shows a day.  Because they’re nationwide, Sciencetellers usually work a certain region; which in Daniels’ case is Tidewater Virginia and northeastern North Carolina.

“We use things that are easily accessible, things that kids might find at home or at a place like Home Depot,” he said. “On the website we even have experiments that kids can do at home.”

Anyone interested in becoming a Scienceteller should know that being able to weave a tale and getting along with children is only part of the requirement.

“You have to obviously have a passion for science, a lot of energy, experience with children is obviously a plus, and a love of the material because this is a very high energy show; if not you won’t last very long,” he said.