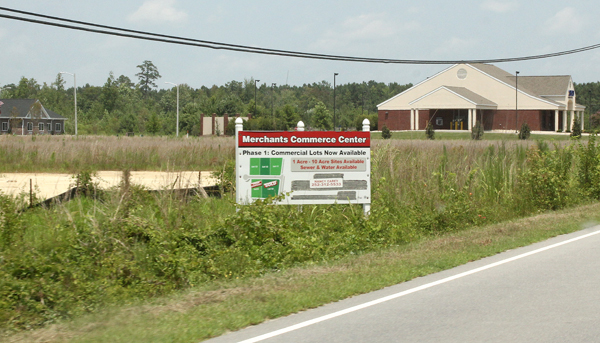 Merchants Commerce Center, located across from Gates County High School, is growing. Shown in the background at right is the State Employees Credit Union while a small portion of the new assisted living facility can be seen in the left background. By all indications, MCC will become the home of the county’s first Chinese restaurant. Staff Photo by Cal Bryant

GATESVILLE – It appears that land ideal for use as a sprayfield for treated wastewater application has been located.

However, its potential purchase by Gates County local government will drive up the price of a three-year-old project already beset with cost overruns.

At their most recent meeting, the majority of Gates County Board of Commissioners voted to proceed with a full study of the soil at a new site that could potentially serve as the sprayfield for the county’s sewer system at Merchants Commerce Center. That system also serves Gates County High School, Central Middle School, the Gates County Community Center, the Gates County Emergency Management Center (at the old prison) and the NC DOT facility.

The 4-1 vote, which was opposed by Commissioner Billy Felton, gave Municipal Engineering the green light to complete the evaluation and testing of the soil in order to determine the feasibility of submitting a report to the North Carolina Department of Environment and Natural Resources and for the engineering firm to present an overall cost of construction that can be shared at a public hearing hosted by the commissioners once the soil study is completed.

The new parcel of land under study is located on Cotton Gin Road.

“We have looked at that 55 acre tract and it looks much more promising than the tract we were on previously,” said Mike McAllister of Municipal Engineering. “Based on the preliminary findings, it looks like we’ll be at between 30,000 and 50,000 gallons (wastewater treatment capacity per day) and we can refine that number once we complete all the tests.”

McAllister noted that the 55 acres is the cleared portion of the land usable for wastewater treatment. He said the county will need to purchase additional acres to serve as a buffer area, which is required.

The other issue involving this latest parcel of property under study for a sprayfield is extending the pipes to get the treated wastewater from the lagoon to the proposed sprayfield location. Another issue is smell….as McAllister pointed out that due to the length of a force main (pipe) used to get the wastewater from point A to point B, the longer it sits stationary in that pipe, the more odor it emits during application process at the sprayfield site.

Upon answering a question from Commission Vice Chairman Jack Owens about the location of the treatment plant and lagoon, McAllister said it would be positioned on the far back edge of the property, adjacent to a wooded area.

“It will be as far away from residences as we can get it,” McAllister stated.

“I think there are seven houses (in that general area),” Owens remarked.

“I still have a question I’ve asked before….in this new addition, what part of the county, what citizens of the county, will this benefit other than Merchants Commerce Center,” Commissioner Billy Felton inquired. “Before any decision is made here to invest any more money into this project, I would encourage us to have a public hearing, to receive public comment on the expense we’re about to bear, to include $165,000 in engineering costs, $300,000 for a fourth force main (pipe), another $150,000 for a (wastewater) lift station, and a couple of million dollars to buy the property. And all this is before any construction can begin. This has become a very costly project that not only this generation, but the next generation will have to pay for. We need transparency; the public needs to know about this major investment.

“I’ve always heard of the need of the many being more important than the need of a few…I’m thinking of the needs of our entire county and not just the needs at the Merchants Commerce Center, which is a private development,” Felton added.

“You said a couple of million dollars for the land; I don’t think that’s a correct figure,” stated Commissioner Henry Jordan. “I haven’t seen the complete (land purchase) contract, but I’m thinking it’s somewhere between $4,500 and $6,500 per acre for 55 acres.”

“Yes, but we’re talking about more than 55 acres with the need of buffer zones,” Felton replied, to which McAllister chimed in and pointed out that 87 total acres were needed.

“To Mr. Felton’s call for transparency, I will say that if you live in Hobbsville, or on the state line up near Virginia, this does benefit them due to the potential of economic development for our county,” Owens stressed. “Every time a new service comes here – a doctor, a dentist or an eye clinic – it benefits you whether you live in Corapeake, or Eure, or anywhere in our county because you can do business at home. And it benefits you because you have others sharing the tax burden.

“And if you live in Corapeake or Eure and you’re tired of having to drive outside the county to work, then know that these new businesses will offer jobs here at home,” Owens continued. “And, yes, I agree with Commissioner Felton that this board needs to be transparent and our citizens deserve to know how their tax dollars are being spent.”

Owens went on to make a generic statement that was presented in a previously held closed session of the board.

“We want to correct some things that were done in the past where the citizens felt were not fully transparent,” he said. “We need to make sure we don’t do those things again.”

“The citizens need to know the information that we use to make our decisions,” she stated.

“We are elected by our citizens and we must make decisions that best benefit them,” remarked Jordan. “A public hearing is to hear concerns from the citizens; that does not relieve the board from doing its due diligence by evaluating of what’s in the best interests for all the county. What we’re doing today is evaluating and moving towards the next step. We need to provide direction to the county manager and to the engineering firm of what the next step will be.”

Jordan noted that the $165,000 in engineering costs represents the entire cost of this part of the project, to include design. To get to the next step of knowing for sure if the property along Cotton Gin Road is feasible for use as a sprayfield/lagoon and treatment facility, further soil tests are required.

“That’s something we need to address and make a decision on moving forward,” Jordan said. “We cannot purchase this land until we know if the soil there will work for wastewater application.”

County Manager Natalie Rountree said an application for a grant from the Golden Leaf Foundation to assist with the costs of this particular stage of the project is pending review upon a decision made by the commissioners to move forward with performing the required soil tests on the property.

“I hear from our citizens about wanting this or that type of business to come to our county. I’ve talked with an economic developer and he told me without having a sewage system in place, those types of business opportunities fall by the wayside,” Rountree stated. “Please be reminded that the option to purchase this land expires in September.

McAllister said approximately $30,000 of the $165,000 total his firm is charging for this project will be used in soil testing.

It was just over one year ago that the county commissioners voted (3-2) in favor of a measure to add $686,200 to an ongoing project that provides sewer and wastewater treatment to an area along US 158 between Central Middle School and Eason’s Crossroads, to include Merchant’s Commerce Center. That additional money was split evenly ($343,100 each) from the county’s general fund and water fund. It included $200,000 to purchase land for the sprayfield and set aside funds for construction.

The original project budget was $2,527,450, which included $1.42 million just for the wastewater treatment plant, ownership of which was transferred to the county by the state. That plant was constructed years ago to serve the now closed Gates County Correctional Center. When that wastewater treatment plant was transferred to the county it was rated at being able to handle 25,000 gallons per day (gpd). However, upon an inspection by the North Carolina Department of Environment and Natural Resources, that rate was lowered to 15,000 gpd.

Upon looking at potential sites for the wastewater sprayfield, county funds were expended to Municipal Engineering last year for a soils study at another tract, this one covering 57 acres. The study revealed that only seven and one-half acres of the parcel will accept treated wastewater by the spray method, further reducing the gpd number to below 2,000. Additionally, the land application of that treated wastewater is limited to only five months.