The place where Crumpler was King 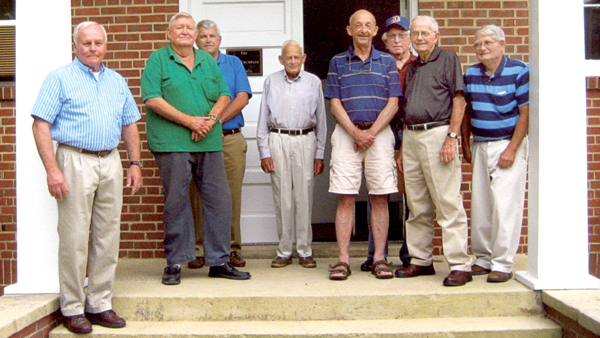 MURFREESBORO – He had no children of his own, but yet was a “father” to thousands.

H.B. Crumpler spent a lifetime as an educator and athletic coach. He poured his heart and soul into molding and shaping the lives of the students he taught in the classroom and coached on the athletic fields.

Although his life here on earth ended nearly 30 years ago, Crumpler’s memory burns bright in the minds of those whose lives he touched.

On July 8, the Agriculture Building that still stands on the grounds of the old Murfreesboro High School (which now houses the Jefcoat Museum) was formally dedicated in Crumpler’s memory.

The driving force behind this decision was Jesse Edward “Tink” Vaughan, a long time member of the Jefcoat Museum Board of Directors and one of Crumpler’s former students. Vaughan proposed his idea to name the old Ag Building in Crumpler’s honor and enlisted the financial support from dozens of other former students to make the dedication possible.

“The building will continue to be used as the woodworking shop for both the Jefcoat Museum of Americana and the Murfreesboro Historical Association. One room in the building contains several museum displays,” said Brinson Paul, representing the Jefcoat Museum. “The only noticeable difference to the building is it now has another name – The H.B. Crumpler Building.”

On the day of the dedication, another of Crumpler’s former students – local author E. Frank Stephenson Jr. – gave those assembled a biographical sketch of Crumpler’s life. Among Stephenson’s numerous books is one released in 1997 – “Call Him H.B.”

“Frank shared many stories of his personal recollections of being one of Mr. Crumpler’s students,” said Paul. “Others in attendance also volunteered stories about their association with Mr. Crumpler. I guess if you wanted to sum up H.B. Crumpler’s life in just a few words, we can say with certainty that he was feared and revered.”

Crumpler was born on July 9, 1911 near Fayetteville in CumberlandCounty. He was educated in Fayetteville public schools. In 1932 he graduated from N.C. State University with a Bachelor of Science degree in Agriculture Education. While at NC State, Crumpler was a member of the Student Council, Kappa Phi Kappa, Poultry Club, Agriculture Club and the ROTC. He used the latter organization to obtain the rank of Lieutenant.

Following his graduation from NC State, Crumpler returned to his roots and taught and coached for two years in Cumberland County.

He moved to Murfreesboro in 1935, launching what later proved to be a near 40-year teaching/coaching career on the banks of the Meherrin River. In addition to teaching agriculture, Crumpler also served as the head coach of the MHS boys and girls basketball teams as well as the baseball squad.

His contributions to Murfreesboro did not begin and end at the high school. Crumpler was often called upon by local farmers to assist in answering problems with row crops and livestock. After World War II ended, Crumpler began teaching night classes in farming and other trades for the returning military veterans.

“So many people here in our area, to include young students and adults, benefitted from his passion to build character and knowledge,” Paul noted.