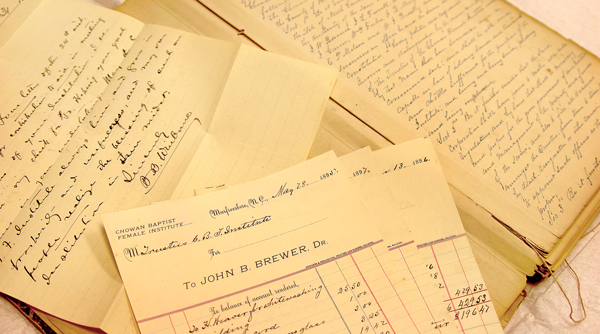 Yellowed by age, Chowan University recently uncovered documents that date from its 1800’s founding era hidden in the basement of the circa 1851 McDowell Columns building. Contributed Photo

Fortunately, that was not the case for some vital records pertaining to the founding of Chowan University.

“I went down to the vault behind the Registrar’s Office to assess storage for some files that needed to be relocated down there. Most cabinets were labeled as to their contents, but one at the bottom did not have a label.  I opened that drawer and saw some really old stuff (I could tell by the binders).  My curiosity got the best of me, so I opened the one on top. The first thing I noticed was the date at the top, written in calligraphy, that had the year 1848,” related Mitch Radford, Chowan University Comptroller, upon making the initial discovery of the 167-year old institution’s founding documents.

“I recognized that the notes were minutes from the board of trustees of the university at that time, and that the last date in the binder was 1895. There was almost 50 years of board of trustee minutes in this binder, possibly dating back to the first official meeting of the board,” Radford added. “Needless to say, it was exciting. There were more binders, that dated in the early 1900’s as well, so there is no telling how much of the university’s history is in there.”

Among the treasures uncovered in the basement vault of the historic McDowell Columns building were Board minutes and accounting notes from its original days as the Chowan Female Institute; a listing of commencement speakers and the Scriptures they focused on from 1866 to 1877; contracts for land lease agreements; and other important aspects of Chowan’s early days as an institution.

Wearing special gloves to flip through the delicate pages, it is clear that all the materials were meticulously maintained, some having been hand-written in calligraphy by the secretary at the time and others on their yellowed, official letterheads.

“We believe that these minutes in original form have been ‘lost’ for more than 50 years,” Chowan Provost Dr. Danny Moore attested to the significance of the find. “Along with the minutes beginning in 1849, we also found a notebook where someone at some point rewrote a portion of minutes of a Chowan Baptist Association meeting in 1848, in which the Association passed a resolution supporting the establishment of Chowan.”

One composition notebook that appears to be from the 1930’s includes the hand-written notes of a Mrs. O.C. Kennedy, relating all the references to then Chowan Female Institute in the minutes of the Chowan Baptist Association meetings. The older, original minutes were copied possibly in preparation for a history of the institution that was eventually published in 1964. These copied minutes range from the original May 19, 1848 meeting of the Bertie Union, one of four unions among the Chowan Baptist Association, and covers up to 1951 and even includes the school closing its doors during World War II.

The Bertie Union meeting notes include “an act to incorporate the Trustees of the Chowan Female Institute at Murfreesboro in the County of Hertford and the State of North Carolina” and “Ratified 29 day of January 1849 resolved unanimously that the above act and incorporation be accepted and adopted.”

The institution, which formally opened its doors on October 11th, 1848 to 11 students, could now uphold its own trustees and quickly reached near maximum capacity of 50 students by the end of the academic year.

“One of the great thrills of doing history is when you fine something like this. We can know how the founders moved toward opening the doors of the school,” commented Dr. Moore. “These minutes help us to understand and that is an extremely important find.”

Other interesting accounting notes from the end of the 1800’s show the president’s priorities have not changed much from today, with building maintenance like whitewashing, replacing glass and putty in window frames, new fencing and a special purchase of a $3.25 well bucket making the list of institutional projects under the 1895 administration of Dr. John B. Brewer. The largest portion of his $406 budget went to a down payment and interest on furniture to outfit the aging building.

A May 31, 1899 letter neatly presented on the letterhead of the Offices of Attorneys-at-Law Benjamin B. Winborne and Lloyd J. Lawrence in Winton written to Rev. L.M. Curtis and the Chowan Baptist Female Institute, as the name changed, referenced an enclosed donation of a $50 check and mentions, “Hoping you great success in your undertaking. May the C.B.F. Institute always live, and grow in prosperity and usefulness, and may our people realize the blessing of such an Institution in their midst. – Sincerely B.B. Winborne”, a sentiment still echoed today.