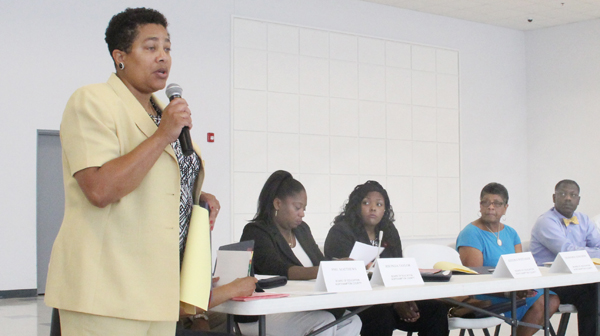 JACKSON – After two hours of friendly debate, no compromise was reached here Tuesday afternoon when members of the two elected bodies in Northampton County sat down for a mediation session.

The county’s Board of Education, on the heels of receiving “level funding” in new fiscal year budget, is seeking $2.5 million more in Northampton taxpayer money.

On the other side of the issue is the county’s Board of Commissioners, who hold Northampton’s purse strings when it comes to providing public funding to a wide array of local services, to include education.

In the new budget, which took effect July 1, the Commissioners approved a financial package that included $3.3 million in current expense funding and $345,000 in capital outlay for the local school system. The entire General Fund operating budget for the county in 2015-16 is $31.93 million. That budget reflects a four percent increase ($1.15 million) over the 2014-15 budget.

In its budget request back in April, the school system sought $3.87 million in local current expense funding and $2.37 million in capital outlay money. 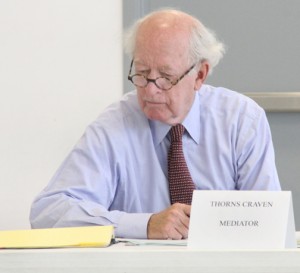 At the outset of her presentation on Tuesday, Northampton Schools Superintendent Dr. Monica Smith-Woofter said, “our needs are reasonable and documented.”

Smith-Woofter itemized the needs for additional funding, a list that included maintaining the employment of four certified staff positions (salaries not covered by state funds), the money that comes from the Northampton Schools budget that is earmarked the charter school in the county, the After School Quality Grant, pay leveling, and keeping the Driver’s Education program in the county at no expense to the students.

“Even though we have had drastic cuts in the fine arts level of study, the school system recognizes the need to afford our students with opportunities in cultural arts, pre-K through 12th grade,” the Superintendent said. “For the past three to four years we have not been able to offer music and arts in our elementary schools.”

She added that due to state funding cuts, the school system’s budget now has to cover the salaries of its Food Nutrition Director and Transportation Director.

“We need more local funding to cover those salaries, to include an art and a music teacher…that’s the four certified positions,” Smith-Woofter noted.

For charter schools, Smith-Woofter said state law requires funding, based on enrollment, for those educational institutions to come through the local public school system.

“We have one charter school in our county; we had to transfer $493,000 to the charter school and we project that amount will increase to $510,000 this year,” she stated. “Out of the $3.3 million the commissioners appropriated this year, $500,000 is not utilized for the traditional public school students in Northampton County. That shows another need we have for an increase (of local funds).”

She added that to provide other opportunities for students not covered by state supplemental funding (for low-wealth school districts), Northampton Schools wrote and received a $404,000 After School Quality Grant, good for two years.

“In turn, we have to invest in that grant; we have to show at a local level that if we receive state and federal money that we’re investing into that program as well,” the Superintendent stressed, adding that the local match to the grant was $134,750.

She said that 10 years have passed since any of the school system’s classified staff have received any increases in salary.

“They haven’t been able to move up in pay classification steps based on their years of experience. We’ve been losing staff to other school systems; four for this year who are receiving a minimum of an $8,000 pay increase at their new jobs,” Smith-Woofter said. “Two that left had been with us for 20 years or more, but were not receiving any financial benefit for their longevity.”

As far as Driver’s Education is concerned, the state requires public school systems to offer that course, but a current movement within the North Carolina General Assembly may cut state funding for that program, thus passing the entire cost ($240 per student) down to the local level.

In capital outlay, Smith-Woofter said due to the closing/consolidation of school campuses over the years (from 14 down to six), $1.6 million is needed to reconfigure schools/classrooms to serve students of a certain age.

“When you have a school built to serve middle school age students and that same school now serves elementary age students, there are Pre-K (age) requirements,” the Superintendent stressed. “There are specific needs for the younger students and with that comes a need for finances to support that.”

Another $80,000 is needed for the early stages of architectural design work – to include soil testing, site survey and placing a purchase option – on land that will serve as the location of a new school (possibly a high school). The need for that school has been discussed by both boards over the past five years.

There is also the need to replace roofs at various school-owned buildings at a cost of $261,000.

“We’ve done patchwork at those schools over the past few years, but those bandaids are not going to hold up much longer,” she said.

Northampton County Manager Kimberly Turner responded to the reasons why the Commissioners chose not to increase funding to the local public schools for 2015-16. Topping that list was the loss of property value to the tune of 7.55 percent. 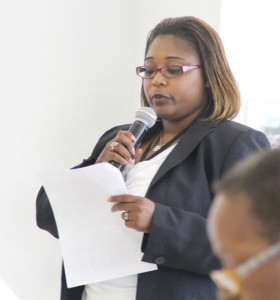 Northampton County Manager Kimberly Turner reads from a list of cuts made in an effort to balance the county’s $31.93 million General Fund budget for 2015-16. Staff Photo by Cal Bryant

“We knew earlier this year that we would be going into the Fiscal Year 2015-16 budget process with less revenue than we had in 2014-15,” Turner said. “The Commissioners did not want to raise taxes and place a burden on the taxpayers. They knew and I knew that we could not appropriate any additional funding over 2014-15 and we would have to decrease operating expenses in order to balance the 2015-16 budget.”

She added that back in March, the county was facing a $2.8 million budget deficit, which did not include the funding increases requested by the school system at that time.

To guarantee “revenue neutral” funding of the budget (the money generated by ad valorum taxes via property values from one fiscal year to the next), Turner said the tax rate would need to increase by five cents (from .92 to .97).

“The question was asked what it would mean to add the additional funding requests from the school system….I said it would add to our deficit and increase our tax rate,” Turner stated. “In order to cover the additional funding requests made by the school system in the amount of three million dollars, we would have to increase taxes by 17.567 cents.”

By May 15, at the start of the budget workshops where the school system’s additional funding request was taken under consideration, the county’s projected deficit had grown to $4.6 million. A little less than a month later, a balanced budget was presented to the Commissioners without a tax increase.

To get the financial spreadsheet to balance, Turner said cuts were made….to include a plan to add a full-time position to the county’s public library, and cutting funds to the NC Forest Service, the community colleges, the Lake Gaston Weed Control Council, and to the two airports that serve the county. Meanwhile, departmental operational funding was cut by $433,464.

“We also had to cut our program that provides services to the county’s senior citizens,” Turner added.

The two boards spent the remainder of the two-hour session, held at the Northampton County Cultural & Wellness Center, bouncing financially-related questions off each other in an effort to better inform themselves of the operational expenses incurred by both public bodies.

In the end, no compromise was reached in front of Thorns Craven, a Winston-Salem attorney who served as mediator.

“Both boards agreed to meet separately and further address this issue,” Turner told the Roanoke-Chowan News-Herald on Wednesday. “We remain hopeful that we can come to some sort of agreement to the additional county funds requested by the school board.”

If that doesn’t occur, a second mediation session will be scheduled, according to NC General Statute 115C-431. That meeting can take place between a quorum of both boards, or a working group to consist of the chair of each board, the school superintendent and county manager, the finance officer of each board, and the attorney for each board.

If a stalemate occurs after that meeting, the mediator has the authority to determine that an impasse exists and discontinue the mediation process. Within five days of that determination, the local board of education may file an action in Superior Court. Either board has the right to have the issues of fact tried by a jury.