POWELLSVILLE – A local man lost his life as the result of a collision between a tractor-trailer hauling timber and a passenger vehicle he was driving here Tuesday evening. 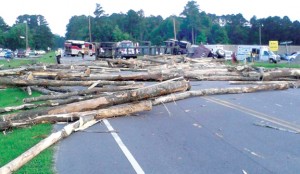 Logs are strewn across the highway near the intersection of US-13 and Center Grove Road, the scene of a fatal wreck that occurred Tuesday evening between a passenger vehicle and a tractor-trailer. Contributed Photo

According to Powellsville VFD Chief David Powell and Sgt. A.L. Bowen of the North Carolina Highway Patrol, at approximately 7:15 p.m. Tuesday, a 2010 Chevrolet passenger vehicle operated by Andrew Preston Lassiter, 39, of Commerce Street in Powellsville, was traveling south on US-13 when the vehicle was struck broadside on the passenger side by a 1986 International tractor-trailer driven by Tony Bell, 50, of 1231Mill Road in Jamesville as Lassiter attempted to make a left turn into the parking lot of the Red Apple Convenience store located near the intersection of Highway 13 and Center Grove Road.

Lassiter was killed instantly on impact and his vehicle was dragged approximately 230 feet, coming to rest on the side of the road; while the tractor-trailer traveled 226 feet before coming to rest on its side besides a ditch in front of the Good News Auto Parts store.  The hauler’s cargo of timber was strewn across the highway causing traffic traveling both north-south and east-west to be backed up for some time.

Both Bell and a passenger in the tractor-trailer, Betty Bell, 49, were transported by Bertie County EMS to Vidant Roanoke-Chowan Hospital where their condition is unknown.

According to Highway Patrol Trooper T.G. Elliott, the accident is still being investigated and charges are pending.

This marks the eighth traffic fatality of 2015 in NC Highway Patrol Troop-A, District-2, comprised of Bertie, Hertford, and Gates counties, and the fourth this year in Bertie.

Arrest made in March shooting