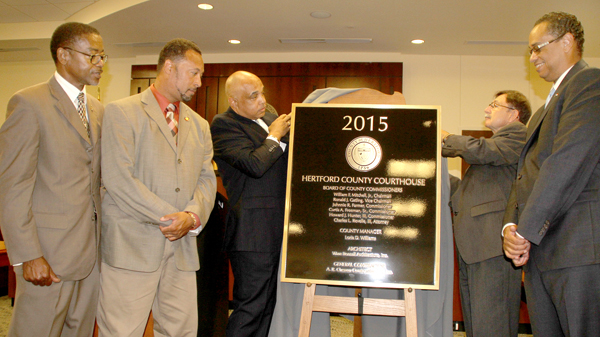 WINTON – For the first time since the founding of Hertford County in 1759, the center of local government is not situated in the heart of historic Winton.

On Wednesday, Hertford County officials rolled out the red carpet to visiting dignitaries and local citizens during the dedication of the new Courthouse and Government Center located just west of Winton on US 158.

The hour-long ceremony included a formal ribbon cutting on the front steps of the courthouse, followed by a program inside one of the facility’s two courtrooms that featured remarks from local and state officials.

“We’re grateful that you are here to share in this monumental occasion. Today is our day; we will be a model for others to follow and we have every right to be grateful,” stated Bill Mitchell, Chairman of the Hertford County Commissioners.

Quoting the former president of the Pepsi Company, “The future belongs to those who see possibilities before they become obvious,” Commission Vice Chairman Ronald Gatling welcomed a standing-room only crowd in the courtroom, before giving way to fellow Commissioner Garry Lewter who led the audience in the Pledge of Allegiance.

In his prayer of dedication, the Rev C. David Stackhouse of New Ahoskie Baptist Church said, “We have planned our work and we have worked our plan; and this vision, this dream, has become a reality. This place, once an empty lot, is now a place of opportunity; a place where humanity can be served. It’s my prayer that everyone who walks through these doors will be met with justice, fairness and sincerity.”

Veteran Hertford County Commissioner Johnnie Ray Farmer, who has been on the Board for 15 years, recalled the long road it took to replace the old courthouse.

“It was back in 2000, when I first became a Commissioner, when our now retired Register of Deeds, Kathleen Wright, asked me to come to her office,” Farmer recalled. “It was raining that day and she showed me the buckets on the floor that were filling up with water because the roof was leaking. She took me next door to Shirley Johnson’s office (Clerk of Court) and showed me the same thing. They both told me this happens every time it rains. They said the roof had been fixed, but it still leaks. 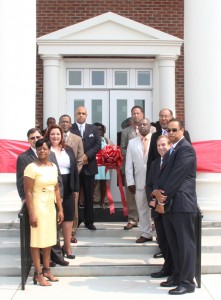 “This was still back in 2000; that’s how long we’ve been fighting a leaking roof, with multiple fixes, at the old courthouse and there was a plan back then to build a new one,” Farmer said. “All we we’re doing with the old courthouse was repeatedly patching the roof, and it still leaked.”

“This is a great day for Hertford County, both for the citizens that will use our new Courthouse and Government Center, and those who work in these new facilities,” Farmer continued.

“She gets the job done,” Farmer said. “She managed this project, the Tunis sewer project and started the new Communications Center project all at the same time while still managing the county. She does a fantastic job.”

Another veteran Commissioner, Curtis Freeman, provided a chronology of how the county arrived at Wednesday morning’s dedication ceremony.

It started in January of 2007 with a structural assessment of the old courthouse, showing deficiencies in foundation and roof, ADA issues and problems with asbestos. In June 2008, a courthouse needs assessment was performed, to include future needs for expansion and options for renovation. That assessment also included a cost analysis between what was needed to fix/expand the courthouse at that time or build a new one. A courthouse stakeholders committee was formed in September of ’08.

The new courthouse project began to pick up steam in March, 2010 when county citizens voted to approve adding a local quarter-cent sales tax, the proceeds of which were earmarked for the new courthouse.

“We would not be standing here today without that important decision as voted on and approved by our citizens,” Freeman said. “That decision gave us the added revenue we needed to get this project off the ground and that added tax now helps us offset our annual debt payments associated with these two new buildings.”

By the end of 2010, an architectural plan began to come together on the new courthouse. By June of 2012, after a long debate of where to build the new facility, the county accepted a land gift (25 acres) from Rivers Edge LLC and purchased an additional 10 acres, all located off US 158 just west of Winton. The construction bid was awarded to A.R. Chesson & Son in March, 2013.

Hertford County was honored to have on hand at the dedication the Senior Associate Justice of the North Carolina Supreme Court – the Honorable Robert H. “Bob” Edmunds.

“I am tremendously impressed with your new courthouse,” Edmunds said. “One of Chief Justice Mark Martin’s initiatives is to bring North Carolina courts into the 21st century, and thanks to the foresight of your commissioners, Hertford County is leading the way.

“We all know that justice exists in our hearts and in our laws, and not in our buildings, but buildings are what allow justice to thrive. With these improved facilities, citizens of Hertford County will enjoy easier access to the courts, to the clerk’s office, the register of deeds office and access to records. This courthouse stands as a monument to good governance and a commitment to equal justice for all,” Edmunds concluded.

“When I was first elected as a county commissioner back in 2004, Commissioner Farmer and I went to Raleigh and talked to Golden Leaf (Foundation) and secured a $250,000 grant for recreation in our county,” Hunter recalled. “Commissioner Freeman said that money could be better used in helping to build a new courthouse.”

“It was embarrassing; I told Commissioner Freeman that he was right,” Hunter continued. “It was a tough road getting here, but we worked through it and made it happen. This is a beautiful facility, but don’t just look at all the state-of-the-art technology; look at the employees here. I commend my former colleagues on the board and Loria Williams for making this all happen.”

“Collaboration, opportunity and political will came together and built this magnificent facility,” Smith-Ingram remarked. “You came together; you have shown with excellence and grit on how to get a job done. This is much more than a building of brick and stone; when we come together as citizens and execute our jobs with excellence, this becomes a building where justice is balanced with mercy and protection. I challenge those judicial officials using this building to make it a place full of human compassion.”

Valerie Asbell, District Attorney for District 6, has seen her office in Ahoskie move to the new courthouse.

“There are a lot of advantages to having the District Attorney’s office inside the courthouse, to include being in the same building with the judges and the Clerk of Court. I love working with my peers and not having to drive 15 miles to do it,” she stated.

“People see this building as a symbol, but it’s much more than that…it’s a place where people and government touch. I am your public servant and you’re welcome to come to my office here on any day. I thank the county commissioners for their foresight to build such a facility,” Asbell added.

Chief District 6 Court Judge Brenda G. Branch cited the meaning of a true community, one she described as sharing values, attitudes, beliefs, responsibility, and goals, and has joint ownership and joint liability.

“A true community, like the one here in Hertford County, takes risks together; I’m certain that getting to this particular day wasn’t easy, but yet we’re here,” Judge Branch said. “We appreciate all you’ve gone through to provide us and your citizens with this wonderful facility. We applaud your vision. We will provide justice as the law commands, as God commands, and with mercy.”

“I still feel like a kid at Christmas,” chuckled Senior Resident Superior Court Judge Cy Grant, referencing the new courthouse. “I thank the Hertford County Commissioners for having the wisdom, the foresight, and the courage to build this facility. To spend this many taxpayer dollars is often times not a popular decision politically, but you saw the need and you decided not to kick this decision down the road for someone else to make.

“This building works well…it functions for the purpose of which it was developed,” Judge Grant continued. “I’ve witnessed that personally and have talked to others working here and they say the same thing. This building is so much more secure than the old courthouse…from the security check-in area at the front door, staffed by two armed deputies, to the 40 cameras stationed throughout these three floors, with a deputy monitoring those images.

“All of us who work here have an obligation to the citizens of this county to treat them professionally, with dignity and with respect. And it’s our job as judges and judicial staff to treat everyone fairly, impartially and equally under the law. For this day to have significance, it’s not about the dedication of a building, but the dedication of the people who work in the building,” Grant concluded.