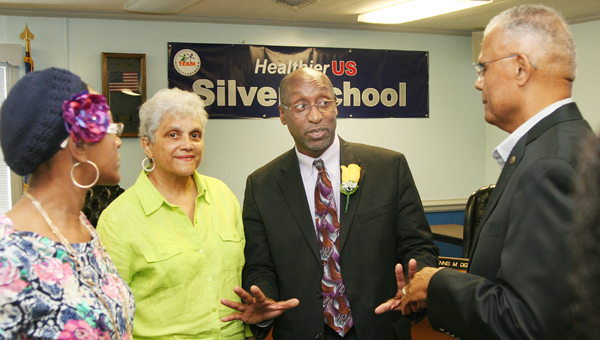 Hertford County Public Schools superintendent Dr. Michael D. Perry (second from right) speaks with well-wishers, to include Dr. Claude Odom (right) at a farewell reception given in his honor Thursday. After three years with HCPS, Perry has taken a similar position in northern Virginia. Staff Photo by Gene Motley

WINTON – From his humble beginnings he rose to the top; and by his own admission, this is not ‘the end’.

The Murfreesboro native, who began his career in the county education system as a primary school student at C.S. Brown and rose to become its top administrator, will leave his job at the end of the month and has accepted a similar post with the Westmoreland County (VA) school system. 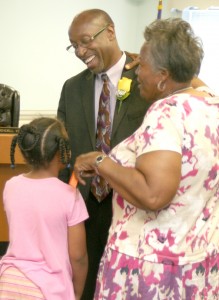 Dr. Perry (center) shares a laugh with a young elementary school student with the New Ahoskie Baptist Church ‘Jesus and Me’ summer camp along with her counselor, Earlene Davis (right). Staff Photo by Gene Motley

“I’ll still be involved in education, I’ve still got a few more things to do,” Perry said, in between the handshakes and the hugs bestowed on him at the soiree.

Of Perry’s three decades of experience in education, more than two thirds of it has been spent in the Hertford County school system from student, to teacher, to instructional specialist, and finally as superintendent.  Other career stops from Raleigh to Rocky Mount-Wilson to Rockingham include serving as executive director of student services, executive director for middle schools, director of school improvement, principal, assistant principal and assistant superintendent.

As of his leaving, Perry served as the President of Roanoke River Valley Education Consortium (RRVEC) of Superintendents, which includes Hertford, Bertie, and Warren counties. He also served on the North Carolina School Superintendents Association (NCSSA) Executive Board and represents the state Region 1 superintendents.

Perry earned his doctor of education in educational leadership and his masters in elementary education from East Carolina University.  He also is an ordained minister and holds a bachelor of science in theology from Cairn University, where he is inducted into their athletic Hall-of-Fame.

Among his accomplishments, Perry established a Science, Technology, Engineering, and Mathematics (STEM) high school in Hertford County, implemented what he feels were sound financial practices in this district, and completed several facility projects.  There was also another trio of things he cites are for the betterment of HCPS.

“I’m really proud of what we’ve done as far as security within the schools,” Perry stated. “We’ve upgraded technology and began the implementation of a one-to-one technology initiative within the district; and one of the bigger things I’m most proud of is that we’ve been able financially to scale back and get ourselves almost within a working budget without having to release anyone.”

Perry says the financial practices done through attrition have helped preserve jobs within the district.  He also cites improvements in academic performance among students. 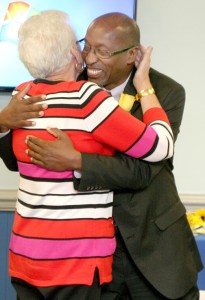 Dr. Perry gets a farewell hug from Chowan University’s Dr. Brenda Tinkham who worked with the superintendent when he was beginning his career as a teacher at R.L. Vann School. Staff Photo by Gene Motley

Partnerships with local businesses through the district’s Career Technical Education curriculum and the NC-IRIS program (North Carolina Investing in Rural Innovative Schools) are the final jewel Perry wears in his crown.

“Communities in schools, university, and partnership with Nucor,” Perry speaks as he rattles them off. “We’ve got now more certifications through the new business aspects; and to bring NC-IRIS to Hertford County where our high school kids can get up to two years of free college by simply taking courses now because parents save money and kids get an opportunity.”

Perry doesn’t consider his job unfinished, as much as he mentions things left undone.

“I didn’t come to leave in three years,” he noted, “I believed there was some work to be done, and that I could get it done; so I am going to have that lagging feeling of not accomplishing all I feel we could have done.”

Julius Walker, retired superintendent of Washington County schools, has been working with Perry since the latter announced he would be leaving the district.  Walker brings back his skills to the Hertford County district on an interim basis having served as interim superintendent prior to Dr. Perry’s arrival.

“I’m leaving them the opportunity to start with a clear financial field so they can come in and just concentrate on instruction and academics.  That’s a good place for a superintendent to begin, so I feel good about leaving a clean desk,” Perry says.

The superintendent hopes his legacy will be his love of the county, and its children.

“I just love the kids of this county because I was once one of them,” Perry recalls. “I just hope whomever comes after me loves them enough to just do whatever it takes so that they can receive a world-class education.”

Perry was treated to a video presentation of his life in Hertford County education, including the surprise of some of his childhood photos contributed by his family.

Following a donation of gifts, testimonials from school board members, parents and more well-wishers along with others in the district system, Perry closed the reception with an impassioned plea to continue the work in education.

“I thank the board (of education) for giving me this opportunity,” he intoned. “Many, many years ago it was my dream to come here, so Hertford County gave me a chance to do one of the things on my ‘bucket list’. Our schools are workforce development magnets. I’ve always dreamed big, and I’ve always been called a visionary; I wanted to come back here and impact children because this is home and I believed I could make a difference and they gave me an opportunity.  I can’t thank them enough for that.”