RICH SQUARE – A local family is praising the efforts of emergency responders from several agencies in locating their missing loved one.

In the late afternoon of Saturday, May 30, Elizabeth B. Wright, an 82-year-old suffering from dementia and is a diabetic, wandered off from her home on West Jackson Street. She shares that residence with her granddaughter, Natia Harris. 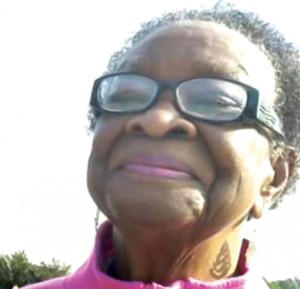 Elizabeth Wright of Rich Square was found after recently wandering away from her home. Contributed Photo

Harris, joined by other family members, to include her cousin, Cynthia Wiggins, hurriedly formed a search team, but experienced no luck in finding their missing relative.

“Aunt Elizabeth was last seen walking towards a wooded area behind her house,” Wiggins said. “She was there one minute, and gone the next.”

“The Rich Square Police, Northampton Sheriff’s Office, and others worked tirelessly to find Aunt Elizabeth while there was still some daylight, but they couldn’t locate her,” Wiggins said.

The search resumed in full force on Sunday, May 31 where Wiggins noted, “the yard was full of vehicles….people turned out in a big way to help find Aunt Elizabeth.”

Included in the search was PERT (Prison Emergency Response Team), a highly trained staff in the art of locating missing individuals. The American Red Cross also responded along with a helicopter from the NC Highway Patrol.

“(Northampton) Sheriff Jack Smith promised us that they would do everything in their power to find her….well, Sheriff Smith is a man of his word,” Wiggins said.

She added that the helicopter was equipped with infra red technology. That, she said, was the key in finding Wright, who had wound up in a wooded area in front of her residence instead of behind it.

“The helicopter spotted her and led those on the ground to her exact location,” Wiggins said. “They found her in a ditch, covered by tree branches. She was alert and talking, but they had to take her to the hospital to get checked out. She was covered in insect bites and hundreds of ticks. It’s a miracle she wasn’t severely injured.

“We prayed on Facebook and asked others to join us in prayer…finally something good for the way Facebook is intended,” Wiggins added. “All I can say is that Jack Smith is a wonderful man, as well as all those who looked for Aunt Elizabeth. They worked together so well; they were determined to find her. The family is so thankful for the way this was handled; thankful for the response and the sincere effort by those looking.”

Harris summed up her feeling on Facebook, noting, “In a time that trust has been an issue concerning the police, they were very professional, courageous and compassionate when it came to the search of our loved one. They showed the epitome of team work and should be commended for it. Our faith has been renewed in the police force! 90% of police are actually good; it’s that 10% that gives negative reflection of officers. GOD SHOWED UP AND SHOWED OUT to enable the officers to perform their duties!”