SECAUCUS, NJ – Chowan University’s Tyler Burden was selected on day three of the 2015 Major League Baseball Draft here Wednesday afternoon.  The Aulander native was drafted in the 20th round by the Toronto Blue Jays, the 602nd overall pick and the 17th player taken in the 20th round.

“I could not have done this without my teammates at Chowan,” Burden said.  “They pushed me each and every day to be the best on the field.” 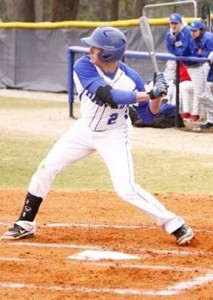 Aulander’s Tyler Burden was picked in the 20th round by the Toronto Blue Jays Wednesday in the Major League Baseball free-agent player draft.

As a junior, Burden posted a .407 batting average, a .731 slugging percentage and a .476 on-base percentage for Chowan, tallying 59 hits in 145 at-bats.  He notched 11 doubles, a team-high six triples and belted eight homeruns.  The 2015 All-CIAA First Team honoree and NCBWA All-Region First Team member accounted for 39 RBI on the season and was a perfect 19-19 in stolen base attempts.

On the mound, Burden tallied 23 strikeouts in 20 innings of work.  He ended the season 2-2 with 17 appearances and a 4.05 earned run average.  Burden led the Hawks and the CIAA with five saves on the year.

Chowan University Head Baseball Coach, Taylor Furlough noted, “We are really happy for Tyler and his family.  Everyone who plays baseball at this level has aspirations to be drafted one day and to see that goal fulfilled is a great feeling.  Tyler really worked hard to develop himself during his time in our program and it is rewarding to see that hard work pay off.  During the season, we played most of our games in front of five or six scouts each weekend.  Tyler and his teammates did a great job focusing on the task at hand, not letting this opportunity become a distraction and I’m really proud of them for that.”

Burden went on to say, “It was my coaches that really played a huge role in my life and helped me succeed on the field but in life in general.  They always knew exactly what to say to pick me up … When it comes down to it, I would not have wanted to play for any other college!”

“Finding a couple of players to come in and replace his production as an outfielder and pitcher is going to be tough, but losing his leadership from the program leaves the biggest void,” added Furlough.  “The Blue Jays didn’t just draft a new prospect for their system; they drafted a whole new fan base in the Chowan University community.  We all wish him the best of luck in this new endeavor.”

The last Chowan player to sign a Major League Baseball contract was free-agent right-handed pitcher Randy Burden (no relation to Tyler) of Suffolk, VA with the California (nee Anaheim) Angels in 2001.

Burden is the first former Hertford County High player drafted since Dexter Carter, pitching for Old Dominion University, went in the 13th round to the Chicago White Sox.  Carter was originally drafted in the 12th Round in 2005 by the Texas Rangers, but did not sign and opted instead to return to school.