GATESVILLE – Over the course of his long career in law enforcement, Gates County Sheriff Ed Webb has been the victim of several assaults, but none to the magnitude of what occurred Tuesday night.

Webb is currently out of action after suffering significant damage to his knee following the arrest of an impaired motorist involved in a single vehicle accident on Hazelton Road. 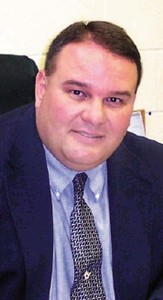 Pederson was also charged with one misdemeanor count of disorderly conduct, as well as DWI. The latter charge was lodged by North Carolina Highway Patrol Sgt. A.L. Bowen who investigated the accident in which Pederson was involved. Other charges are pending by the Highway Patrol, according to First Sgt. Mike Warren.

“I’ve been shot at, stabbed, cut, cussed at and physically assaulted during my time as a law enforcement officer, but this one tops them all,” Sheriff Webb told the Roanoke-Chowan News-Herald on Wednesday morning while at home recuperating from Tuesday’s attack.

Webb said the entire ordeal began after emergency responders were on the scene of the accident – one where Pederson had wrecked a pick up truck he was operating on Hazelton Road sometimes after 8 p.m.

“(Pederson) became unruly at the accident scene, so much to the point where he first spit at the emergency responders and then assaulted one of our EMS workers by punching her in the face as well as assaulting a member of the Gates Volunteer Fire Department by striking him in the face with his elbow,” Webb said.

Upon transport to the Gates County Sheriff’s Office in Gatesville where a breathalyzer test was to be administered, Webb said Pederson, who was handcuffed but not shackled at the ankles, became uncooperative.

“He refused to walk into the Sheriff’s Office, even though his legs were not restrained,” Webb said. “That only left us one option, that of dragging him inside.”

Once in the hallway, Webb said he wasn’t prepared for what took place next.

“Using a leg sweep, he (Pederson) kicked me in the knee, which knocked me to the floor,” Webb explained. “He then wrapped his legs around my knee, in a leg lock so to speak, and wouldn’t let go. It all caught me by complete surprise.”

Webb added that another law enforcement officer stepped in and used physical force that resulted in Pederson easing his grip on Webb’s knee.

“I was able to stand, but was experiencing a lot of discomfort in my right knee,” said the Sheriff. “I later learned while at R-CH (Vidant Roanoke-Chowan Hospital in Ahoskie) that I had suffered torn ligaments in my knee. My knee has been immobilized with a soft cast and I’m scheduled to visit an orthopedic surgeon on Friday, but I’ve already been told that I can expect to be out of action for six to eight weeks.”