Order in the ‘new court’ 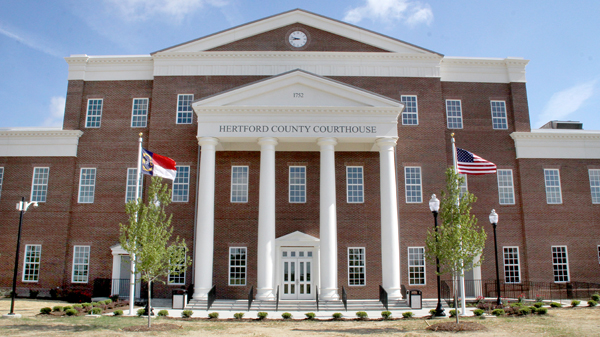 For the fifth time in the past 256 years, Hertford County has opened a new courthouse….this one located just west of Winton off US 158. Staff Photo by Cal Bryant

WINTON – For the first time since Winton’s founding in 1768, sessions of Superior and District Court were gaveled to session on Tuesday morning at a location outside of the historical Hertford County seat.

Luckily there was neither a Union gunboat nor an angry Allen ancestor in sight. 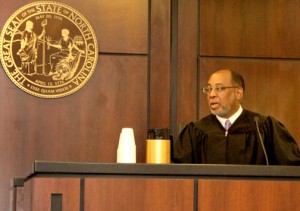 On Tuesday, court sessions were conducted for the first time in the new Hertford County Courthouse with the Honorable Judge Cy Grant (above) and the Honorable Judge Thomas Newbern below) respectively presiding over sessions of Superior and District Court. Staff Photos by Cal Bryant

Hertford County’s new courthouse, located just west of Winton’s corporate limits, opened Tuesday with the Clerk of Court’s office in full operation and two courtrooms in use. Other county offices are scheduled for relocation this week, to include those destined to work in the new County Administration Building located adjacent to the new courthouse.

But on Tuesday, the focus was on holding court. The Honorable Cy Grant, Resident Superior Court Judge, officially became the first to open legal proceedings in the new courthouse as he gaveled a session to order at 9 a.m. Thirty minutes later, the Honorable Thomas Newbern opened District Court in adjoining courtroom on the second floor of the new facility. Newbern, who retired as Chief District 6B Court Judge in 2012, periodically assists in handling court sessions for the newly consolidated Judicial District 6.

“I feel like a kid at Christmas,” said Judge Grant as he visually surveyed the new courtroom shortly after Hertford County Sheriff Juan Vaughan called the court session to order. 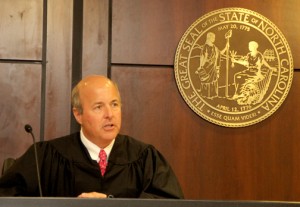 Grant added that he toured the new courthouse last week, visiting with employees of other offices of Hertford County local government that we in the process of moving in.

“Everyone seemed to be extremely pleased with what they’re seeing here,” Judge Grant noted. “I want to publically thank the Board of Hertford County Commissioners the foresight, courage and wisdom to make this happen.”

“If you have ever built a new home, you come to realize all the anxious moments that go along with that; multiply that by 1,000 and you will come to realize what Ms. Williams went through to supervise the construction of this courthouse,” Judge Grant remarked.

“When you realize there have been only four other courthouses used in Hertford County over the past 250-plus years, then today is a big deal,” Judge Grant said. “Personally, it’s a big deal this morning to preside over the first session of Superior Court in this new courthouse.”

Pointing to the two doors used by the public to access the new courtroom, Grant reminded those in attendance that the courthouse belongs to the people of Hertford County.

“Whatever happens in here, whether it be to their liking or not, I want those in here to feel they have been treated fairly,” he stressed. “We, as court officials, need to do everything we can to make sure we’re professional and respectful and treat these people right.” 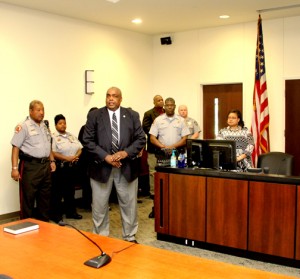 As a noted historian, Judge Newbern said Hertford County was founded in 1759.

“So, in the past 256 years there’s only been five occasions that the records show that the citizens gathered in Hertford County to witness the opening of a first court,” Judge Newbern noted. “This is a very historic day and it is my honor to be here in Judge Grant’s courtroom to witness this occasion.”

Later, Newbern further traced the history of courthouses in Hertford County, saying that by the time Winton was founded in 1768, there were already public buildings, including a courthouse. The latter was in use until 1830 when a local man, Wright Allen, was arrested for forgery. In an effort to destroy the evidence on file in the Clerk of Court’s office, Allen torched the courthouse, burning it to the ground.

As fate would have it, the Clerk of Court at that time had taken the documents regarding Allen’s case to his home in Murfreesboro. Allen was convicted of the crime and publicly whipped in front of the courthouse ruins.

A new courthouse followed, but that one suffered the same fate… this time not by a disgruntled local citizen.

On Feb. 20, 1862, Winton was invaded by Union troops who approached the town in gunboats on the Chowan River. They initially used those gunboats to bombard the town. Upon discovering that a small group of Confederates defending Winton had fled, Union troops came ashore and set fire to nearly every building in the town, including the courthouse.

“Many believe the majority of Hertford County’s colonial records were destroyed when the Union troops burned Winton in the Civil War, but those vital records were actually lost during the fire in 1830,” Judge Newbern told the Roanoke-Chowan News-Herald.

After the Civil War burning, it took until 1875 for Hertford County to open a new courthouse. That structure was expanded in 1905. In 1956, county officials opted to construct a new courthouse, one that remained in use until the opening of the new facility this week.

Upon opening the first session of District Court on Tuesday, Judge Newbern said the moment was especially pleasing due to the fact that he is a Hertford County native and served on the bench for 22 years, the last two as Chief District Court Judge. 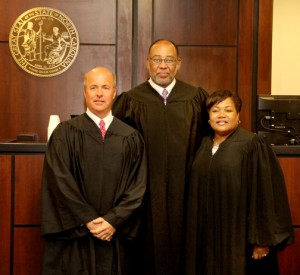 “I want to commend everyone who was involved in the planning and construction of this building,” Judge Newbern said. “We have had a need for a new courthouse for a number of years, one for the health and security of those working in the old courthouse, but mainly to bring the citizens of Hertford County into the 21st century with the most state-of-the-art equipment, that’s what this new courthouse does.

“I also want to commend all the people involved over the past seven to 10 days in making the move, the transfer of all the equipment and the files from the old courthouse to the new courthouse,” Judge Newbern continued. “It was a Herculean task to hold court here today in that short period of time.”

Newbern signaled out two court officials – current District A Chief Judge Brenda Branch and current District 6 Attorney Valerie Asbell. He noted the hard work and dedication of those two individuals who were both at the forefront of the effort it took to complete the merger of former Judicial Districts 6A and 6B into one four-county District. That consolidation took effect on Jan. 1.

“There were some great people here to work with to make this new District work,” said Judge Branch. “They made a tough task much easier.”

“This was a big process to open this new courthouse when you include the three offices, to include mine in Ahoskie, that were not housed in the old courthouse, but are now located here in this new building,” Asbell noted. “We’re here to serve you.”