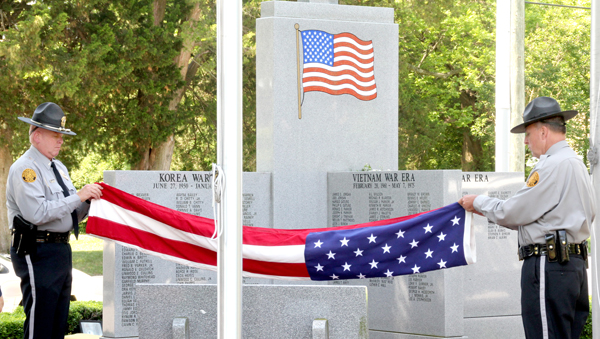 MURFREESBORO – With the 600-plus names inscribed on the Murfreesboro War Veterans Memorial, complete with the U.S. Flag flying overhead that was fully extended thanks to a steady breeze, providing a perfect backdrop, local citizens gathered here Monday morning to pay their respects to those living and dead who fought to defend America’s freedom.

It was Memorial Day 2015 – a time to pause and reflect on those brave Americans in uniform who selflessly laid down their lives while engaged in battle or training. 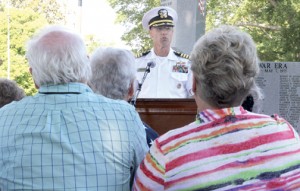 He recalled the words of former U.S. President John F. Kennedy, a World War II veteran, who said, “A nation reveals itself not only by the men it produces, but the men it honors and remembers.”

“As we stand here today I ask you to call to mind the loss and the wounded of all those who have served this great nation,” Manning said. “The sacrifices made by America’s sailors, soldiers, airmen, Marines, and Coast Guard can never truly be measured. But they can always be honored and appreciated. Their stories can always be told and shared, and kept alive.”

Manning read the names of a few Murfreesboro-area men who have served with honor from World War II forward.

“We also need to thank the spouses and the children who have supported the veterans unconditionally and for the sacrifices they made,” Manning noted. “And remember those who made the ultimate sacrifice.”

In his eyes, all those who put on a uniform in defense of the United States is a hero.

“They represent the best in each of us; coming from different backgrounds and every walk of life,” Manning stressed. “Without their commitment and service, our nation would not be what is today. They desired to serve something far greater than themselves and today we honor that desire and commitment, and the families that supported them.” 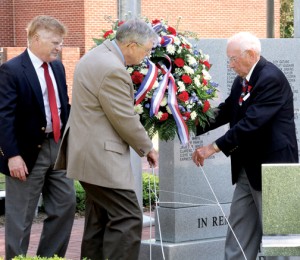 From left, Murfreesboro military veterans Doug Deets, Brinson Paul and Joe Dickerson (joined by Dave Farnham – not shown) prepare to lay a memorial wreath at the base of the town’s War Veterans Memorial. Staff Photo by Cal Bryant

He closed by reminding the audience that every time they look at our nation’s flag, to recall the irreplaceable lives sacrificed while defending those red, white and blue colors.

“Each color represents the valor, purity, innocence, vigilance, perseverance and justice found in the heart of each and very member of the U.S. Armed Forces,” Manning concluded.

In his remarks, Murfreesboro Mayor (and military veteran) John Hinton read “What is a Veteran” (author unknown).

“A veteran, whether active duty, reserve, discharged or retired, is one who at some point in his or her life wrote a blank check made payable to the United States of America in the amount of up to and including his or her life; that is the definition of honor,” Hinton remarked. “And there are way too many people in America today who no longer understand that fact.”

Hinton added that the bond between veterans was forged over 240 years ago during the time leading up to the start of the Revolutionary War.

“Those men were our first American veterans; they were followed by millions who over the years have answered the call of their country, all willing to give their lives if necessary,” the Mayor added. “May God bless them all.”

Darren Piper led those assembled in the singing of the National Anthem and America the Beautiful. Laurie Brooks played “Mine Eyes Have Seen the Glory.”

Murfreesboro Police Chief Darrell Rowe and MPD Lt. Joe Burgess lowered the existing “colors” (an American Flag that was flown over the U.S. Capitol on March 1, 2007 and given to the Town of Murfreesboro – and used at the dedication of the War Veterans Memorial – by U.S. Senator Elizabeth Dole) and then raised the traditional flag displayed daily over the Memorial.

Dickerson and Paul were joined by fellow Murfreesboro military veterans Dave Farnham and Doug Deets in laying a ceremonial wreath at the base of the Memorial.

The Rev. Monica Beachan offered the invocation while the Rev. Lee Canipe closed the ceremony with benediction.