Forest tent caterpillars on the move

Hoggard said after a report came in from a local timber buyer in Bertie County, the North Carolina Forest Service scheduled a flight to look at the bottomlands along the Roanoke River. 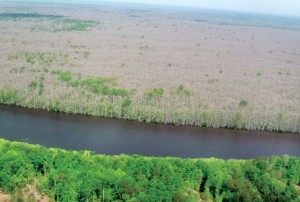 This area along the banks of the Roanoke River shows the impact that forest tent caterpillars can have on hardwoods. Contributed Photo

“Our flight revealed large areas along the Roanoke River from around Hamilton to an area close to Plymouth were affected,” Hoggard said. “There were some small areas along the Cashie River east of Windsor that were also affected.”

The forest tent caterpillar is a common defoliator of North American forest. This native insect feeds on a wide variety of hardwood forest, to include sweetgum and swamp blackgum in eastern ‘Carolina, but will move to shrubs and ornamentals when their preferred host are eaten.

Hoggard said the larva appear in the spring as one inch long nearly black caterpillars about the time when leaves begin to grow.

“Some years when the population is numerous they can defoliate acres of trees,” Hoggard noted.

Full grown caterpillars are about two inches long and have a row of 10 to 12 keyhole shaped markings down their backs.

Defoliated trees usually rebound, but may have some dead branches and growth loss. However, repeated attacks annually on the same forests may result in the death of the trees.

Hoggard stressed that control measures are not practical for forested land, but homeowners with attacked orchard, ornamental or shade trees may use a chemical or microbal insecticide. For more information on control options, Hoggard recommends contacting your local NC Cooperative Extension office or North Carolina Forest Service office.