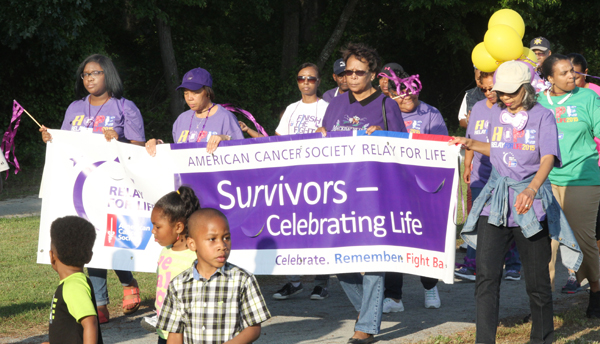 Cancer survivors were honored with the task of carrying the Relay for Life banner on the first lap of Friday’s opening ceremonies at the Cultural & Wellness Center in Jackson. Staff Photo by Cal Bryant

JACKSON – One day; one night; one community; one fight.

For the fourth consecutive year, Northampton County citizens united in an effort to raise awareness and cash in an ongoing battle to eradicate all types of cancer. 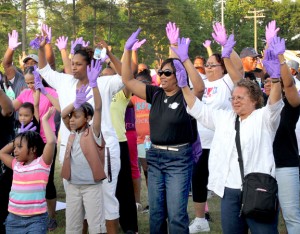 And judging by the turnout on a warm, pre-summertime weekend, that effort was outstanding.

“It really lifts your spirit when you look out and see hundreds of faces staring back at you,” said Marla Jerman who served as one of the lead individuals on the 2015 Relay planning committee.

“We’ve gone through what most all basically new events go through in the early stages of organization, and by that I mean growing pains,” Jerman continued. “After what I saw this year and from what I’ve heard others talk about, I feel this year was definitely our best year yet and I see a bright future ahead for Northampton Relay for Life.”

Jerman said the influx of new teams as well as a promising association with Northampton County Public Schools were a welcomed sight.

“We had some teams that came back on board with us this year mixed in with teams that have been with us from the start four years ago, and some new faces,” she stated. “And this year we had Northampton County Schools onboard with us. That really had a big impact on our Relay.  We had a great turnout of young people and they took part in our activities.”

As of the last report, this year’s Northampton Relay raised approximately $45,000. Jerman said the goal was $55,000. However, teams and individuals can still make contributions until August and that money will count towards the overall goal.

At the survivor’s reception held inside the Cultural & Wellness Center two hours prior to Friday evening’s start of the outdoor Relay, District 3 State Senator Erica Smith-Ingram of Northampton County delivered the keynote address. 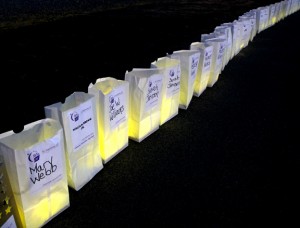 Candle-lit bags, bearing the names of victims and survivors, serve as reminders to the ongoing battle to eliminate cancer. Staff Photo by Cal Bryant

“She did a wonderful job, inspiring all of us with her words,” Jerman noted. “She followed our theme of healing with harmony.”

The 2015 Northampton Relay honored several individuals and groups with special awards. Those honorees were:

Survivors of the Year – Lott Majette of Rich Square and Eleanor Harris of Jackson;

Caregiver of the Year – Geraldine Langford of Seaboard;

Young Person of the Year – Shameka Wright, team member of the Lucy F. Dunn Gleaners #91 of Seaboard (the youth who raised the most money); and

Recognition for the Grand Club and All-Star Club (in fundraising) will be bestowed later this year.

“We feel we can make this event even better next year, which will mark our fifth year of Relay in Northampton County. Get ready now because we’re out to make our event the best it can be,” Jerman concluded.