No, you haven’t been transplanted to Georgia, Alabama, Florida, or Texas.  2015 marks the first year the NC High School Athletic Association (NCHSAA) will not limit the number of players who can participate in 10 days of non-contact football skill development drills prior to the starting day of that school’s final exams.

Previously, teams could have 21-man workouts that began in March, but the NCHSAA changed the rule back in December.  They followed that up by tweaking another change last month to clarify the time period by which teams could conduct the drills. 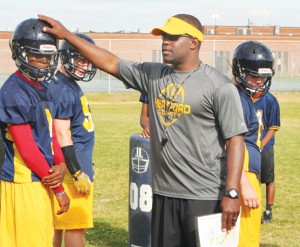 The ruling was met with mixed reaction among area high school coaches as they began their drills.  Hertford County and Gates County High Schools began their drills last week while Bertie and Northampton County started on Monday.

“Anytime you can have football practice it’s a great day,” said Hertford County coach Terrance Saxby with a sly smile. “It’s exciting because it’s the first in North Carolina and it kind of made history.  The kids are just as excited as I am because it’s a good time for us to slow down and teach the kids some of the things we want them to learn.”

Saxby spent some time in a Virginia school system so the changes are not entirely new to him.  Spring football is done in states like Georgia, Florida, Alabama, and even Virginia where he used to teach and coach.

“We will have until the 29th which is about a week and a half,” Saxby continued. “We’re going to get after it a little bit and hopefully they can learn something and that can take us into the summer.”

So much of the spring practice will also eliminate basic fundamentals of the game that coaches sometimes have to wait until July or August to teach.

“It’s a head start on the kids learning some of the basics and how to do them like getting down in a three-point stance,” Saxby said. “These are things that slow you down as a coach in August because you’re getting ready to play in three weeks.”

Bertie coach Tyris Hill says for programs that have to replace a lot of graduating lettermen, the additional time in invaluable.

“I had to replace my quarterback (Aaron Wells) and the front-runner now, Darquail Wilkins, will get most of the snaps,” Hill said. “He’ll be the (player) who will benefit most with the work in the spring.  If we’d had him where we needed him to be last year we would have been a totally different football team.”

Hill, like Saxby, is in his second year as head man prowling the sidelines and last season had to quickly institute a system.  Now he gets a jump-start on what he hopes his players have retained from a year ago.

“Seeing them learn the system, learn the steps, the progression, makes me extremely happy,” Hill added.

The Falcons coach is wary though of some schools that might tweak the rules for their benefit.  But he does say that in a state like Virginia, for example, the extra month of spring football in essence gives a player a whole extra year of development over a four-year period.

“Some schools may take it a bit far, but without the kids putting on pads there won’t be any contact,” Hill alludes. “What we’re really going to use it for is as if it were the first ten days of summer; where we can get all out installations in so that when we do come back all we’ll have to do is fine-tune it.”

Both coaches say they would love to see spring drills end with a simulated scrimmage, or game-day situation, which some states allow.

“If it goes well and there aren’t a lot of violations, maybe in the future they will allow pads and a spring game,” Hill said.

“I think a spring game would be really beneficial because it would really allow you to evaluate your kids,” said Saxby. “Skill-wise it’s a good building bridge, but we really don’t lose out on much without a game.

By rule, every player, or prospect, who participates, has played high school football whether it was j.v. or varsity.  Middle school students are not allowed to participate in anything until they are classified as “high school” kids.

“They are the ones who understand the expectations,” said Saxby. “Right now it’s about slowing down and making sure they understand the basics.  Some of them know, but the great thing is you’re still participating.”

Gates County head coach Matt Biggy says while he sees some positives, he also sees some negative aspects to spring football, too.

“For us at our level it’s a bit of a hindrance because prior to this year we were able to start in mid-March and take 21 kids on the field,” Biggy stated. “Now, we just have the 10 day window.  I’d rather take the 21 guys because this time of year some kids are also playing baseball, running track and playing tennis and they won’t be able to participate; so it really doesn’t benefit us to have unlimited numbers.”

Smaller schools, like 1A Gates County, could be at a disadvantage because they can’t always get their skill players out.

“I can see where your bigger schools would benefit because they’d probably have about one-quarter of their guys out there,” Biggy says. “On the flip side, it also hurts when you’ve got that many kids coming out and there’s no spring game.  Colleges are also able to use this as a recruiting tool because they’re able to come to your school and see the kids firsthand that they might not be able to see in the fall because of game preparation.  I can see how it helps with a full complement, but it also hinders us to not be able to get out there in March.”