WINDSOR – The Bertie County Relay for Life, just one of many communities across the country that came together this past weekend to honor cancer survivors, remember loved ones lost, and fight back against a disease that has already taken too much, was held Saturday as a one-day event at Roy Bond, Sr. Stadium at the old Bertie High School.

“The American Cancer Society has some options for different models for this year and we chose the 12-hour event on Saturday from 10:00 in the morning until 10 at night,” said Relay committee member JoAnn Jordan. 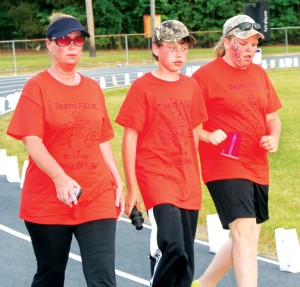 Cathy Pierce (left) and her son Christopher, along with Elizabeth Eure, walk 75 of the 100 laps they pledged for their Friends of Relay (F-O-R) team. It was the most laps by an individual. In all, F-O-R completed the most team laps: 267. Staff Photo by Gene Motley

In addition to the music, food, and fun, participants took turns walking or running around a track, one member walking the entire 12 hours because cancer never sleeps.

“As of Monday we’ve raised over $161,120,” said Funds Chairman Bobbie Parker. “Of course, not all our corporate partners have reported so we expect to have more to report before the end of the fiscal year.  With all we hope to raise, Bertie should reach or exceed our goal of $211,000 when all sources have reported in helping make a difference in the fight against cancer.”

2015 had to mark a bittersweet celebration of the fight for Bertie Relay for Life, the oldest Relay for Life in North Carolina. In early April, longtime Relay chairman Artie Johnson couldn’t pull off a win in his battle with diabetes but Johnson’s other committee members picked up the fight; and they also chose a unique way to remember their former chair.

“Artie will be forever remembered with the annual Artie Johnson ‘Heart of Relay’ Team Spirit Award”, said Parker. “We have named it in his honor.”

A plaque symbolizing the honorary distinction was presented to Artie’s family just after the Opening Ceremonies at the school track. The first winner of the award was the Friends of Relay, or F-O-R, who decorated their tent site in camouflage and wore hunter’s orange T-shirts with turkey emblems on the backs that read, ‘Gobble Up Cancer for a Cure”.  The winning team was captained by Jordan.

Vidant Bertie Hospital was second and their theme of ‘Taking a Bite out of Cancer’ was second in the running for the Johnson award.

Among the other award recipients were: Best Team Theme:  Bertie County Schools Central Office Services with Dr. Seuss’…”One wish; Two wish; Three wish; We all wish for a cure!”

Vidant Bertie Hospital and Conocanary Baptist Church of Hexlena were second and third in both camp site decoration and T-Shirt design.

The most survivors recruited by any one team and winner of the Willie Bazemore Pack the Track Award were the Friends of Relay.

“We had 65 survivors present,” said committee member Debbie Howard, who handled the Survivor’s Walk. “We’ve probably got another 40 or 50 registered.”

The Beth Cayton Light Up the Night Award for most luminaria sold by a team also went to Friends of Relay who had the most laps walked by a team with 267.  Cathy Pierce, who walked with her son, Christopher, and other members of the F-O-R team, claimed the title for walking the most laps by an individual.

“I set a goal of 100 laps,” said Pierce, ambling her way around the oval, sometimes at a walker’s gait, and other times at a nice stroll. “I’m more than halfway there despite a late start.”

Perdue Farms of Lewiston easily outdistanced their corporate-contributing rivals with pledges totaling nearly $100,720 as the top fund-raising team, while the Town of Aulander was second and Friends of Relay, third.  The top fund-raising individual was Aulander’s own Bobbie Parker, who brought in nearly $11,500.

Finally, there were even prizes for the youngsters with Reagan Dickens claiming Little Miss Relay, Paisley Copeland with Little Princess Relay, and finally Little Mr. Relay went to The Bandi Boys.