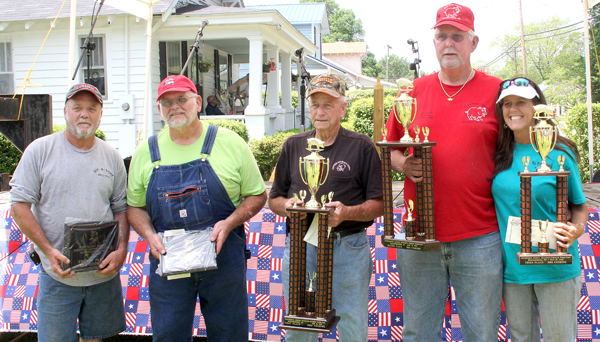 In 2015, Meeks sent his fellow pork chefs to their knees.

The veteran cook earned the favor of the judges, thus defeating 17 other entries to win the 2015 crown on a day where the R-C Pork Fest set an all-time attendance record. 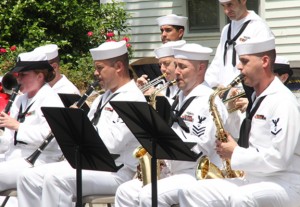 Members of the U.S. Fleet Forces Ceremonial Band from Norfolk, VA received a rousing ovation from the Pork Fest crowd as they performed two sets at the annual event. Staff Photo by Cal Bryant

“It’s a good feeling to hold this trophy, but you never know how it’s going to turn out until they announce the final results. It’s all up to the judges,” said Meeks, a native of Newport in Carteret County.

Meeks said he has been cooking pork competitively since 1991. Prior to claiming the first place trophy on Saturday, Meeks previously won two R-C Pork Fest titles.

“I just feel at home when I come here to Murfreesboro,” Meeks said. “I really enjoy coming here; they do a great job putting on this event.”

As part of his winnings, Meeks received a check to offset his entry fee into the State Pork Cook-off to be held later this year.

For the judges, all certified by the North Carolina Pork Council, they had a tough job selecting a winner from what is traditionally considered as the “cream of the crop” when it comes to swine chefs in eastern ‘Carolina.

“It’s a ‘who’s who’ list here today,” said judge David Burke. “All of these guys and gals know what it takes to cook a hog.” 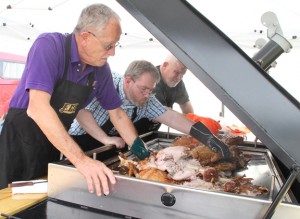 Burke, who has cooked competitively, said he looks first at the color of the roasted pig.

“Color is important, I prefer to see it a shade past pecan tan,” Burke stated. “Other judges might like ‘em a shade darker or lighter.”

Other criteria for a perfectly cooked pig includes the moisture content of the meat and how the meat pulls away from the bone (tenderness).

Upon completion of the judging, each pig was finely minced and covered in Murfreesboro’s “secret sauce.” That pork – along with slaw, potatoes and hushpuppies cooked fresh at the site – was served for lunch.

According to Brinson Paul of the Jefcoat Museum – the benefactor of the R-C Pork Fest, 637 plates were served.

“That’s an all-time record and we’ve been doing this event now for 14 years,” Paul said.

Paul added that he heard, “nothing but compliments” from those attending this year’s event.

“That’s good to hear,” he said. “We have about 100 volunteers that help stage this event every year and all the compliments need to go to them for the hard work they put in.”

Proceeds from the event are used for upkeep of the Jefcoat Museum, which was open for tours on Saturday.

“With the record crowd we had, I feel we’ll end up with a pretty good profit off this year’s Pork Fest,” Paul noted. “This is our biggest fundraiser of the year.”

Those in attendance were not only treated to the best pork on the planet, but were entertained as well. This year’s event was highlighted by a wide variety of entertainment – to include a group of Kindergarten students at RiverviewElementary School; eight-year-old singing sensation Karley Jo Rose; the Nansemond County Cloggers; the Potecasi Strings orchestra; the Eyes of Emiline; and the U.S. Fleet Forces Ceremonial Band from Norfolk, VA.

“We hope to have the Navy Band again next year….they have an open invitation to come back in 2016,” Paul concluded.