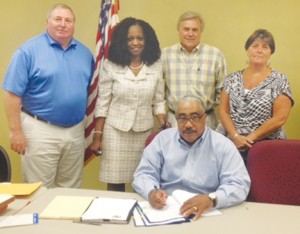 The Commissioners and Republic had agreed to all the contract elements, so all that remained since Republic won the bid over Waste Industries back in March was for each side’s attorneys to review the contract.

The move ends operation of the sites by Waste Industries, who had held the contract with the county since 2001.

County Attorney Lloyd Smith, of the firm of Pritchard & Burch, who led the county’s negotiation process stated, “The strength of the Board’s negotiations and the execution of this contract, represent a signature accomplishment for this Board of Commissioners.”

The new agreement rolls back the cost of the convenience centers for five years with the price locked in until July 1, 2019 according to Smith. Under the new contract, the county will experience a price reduction equal to the annual charges incurred in 2010.

Operating costs for the sites had previously risen by 50.2 percent since 2001.

“The citizens of the county made it very clear that they were in favor of keeping their convenience sites,” said Wesson, referencing an earlier proposal by the county to close the sites and change to curbside pick-up.

“The Board worked extremely hard with both bidders to insure that we got the very best possible deal that we could possibly get to keep the convenience sites,” he added.

The official vote taken by the Commissioners on March 2 represents a shift from the 15-year operating agreement with Waste Industries when the annual cost for the convenience centers was $330,247. The expense for the taxpayers has grown in 2015 to almost a half a million dollars per year since then.

Under the two prior contracts adopted by the Commissioners in 2001 and 2006, the county increased Waste Industries’ compensation annually using the CPI – consumer price increase – in addition to fuel pricing adjustments. Previous annual increases incurred by the county were capped at seven percent with a minimum floor of two percent escalation each year.

Bertie County’s negotiations with Republic Services resulted in a ten percent price cut, and a monthly rate of $36,859 with no increase for the first three years.

Beginning in the fourth year of the new agreement with Republic Services, on July 1, 2019, the annual fixed rate fee increase will be capped at two percent (2%) with no other adjustments or fuel escalation fees allowed to be charged. Based on financial projections, the county is expected to save more than a half-million dollars ($538,000) over the length of the new ten year contract, beginning July 1.

“Because of the strong negotiations that we had with both firms we were able to reduce the cost of the convenience centers significantly over the next 10 years and at a huge savings to the county,” said Wesson.

The new agreement also comes with additions such as more dumpsters and disposal of electronic waste, among other things.

“I think the citizens will find that not only did we keep the convenience centers, but we improved not only the cost but also the service they will receive at the centers for years to come,” Wesson added.

Looking forward, the Commissioners next have to make plans to negotiate the renewal of the landfill host agreement to be effective in October 2018.

“This contract with Republic Services for the operation of the regional landfill generates in excess of $1 million dollars annually for the county’s General Fund and helps to offset the property tax burden for our citizens,” said County Manager Scott Sauer in a news release.

Additionally, Republic Services has been a strong corporate partner for the Bertie County community.

Matt East of Republic said that in addition to the company’s presence in Bertie County for a number of years, they also have made donations to many organizations within the county. These include, among others, significant annual contributions to Bertie County Schools and to the Windsor YMCA.

“We’re just pleased to furthering our relationship with the county and look forward to working with them on the convenience sites,” said East in an interview with the News-Herald.

Commissioners Tammy Lee and Stewart White expressed concern in March over the current employees at the convenience sites would have the first opportunity to maintain their positions. East said that condition would be honored.

“Not only are we making every effort to keep the sites where they are and hopefully that will be maintained,” East added. “We’re hoping to retain as many of the Waste Industries site workers that they have right now and convert them over to Republic.  We’re in the process now of opening up the job postings so that they will have the first opportunity to apply.”