LASKER – Target skeet shooting is easy.  It’s just that to successfully compete you need to shoot a near-perfect score every time, and doing that consistently is not very easy at all. 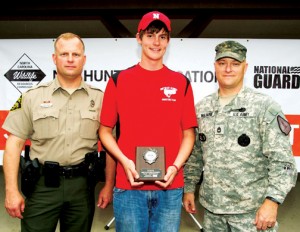 Teams are organized within public and private schools, as well as home-schooled students and teams representing organizations such as 4-H or FFA. Nine district tournaments, held in March, saw combined participation by more than 3,000 students from 311 schools.

There were 599 students from 61 teams participating in this year’s tournament, having advanced from the nine district events. Total attendance, including spectators, staff and competitors at the tournament was estimated at 2,100.

In skeet shooting, either with .22 rifle or shotgun, clay targets are released from “houses”, either high (10 feet high) or low (3 feet, 6 inches high) about 126 feet apart on either side of a field arranged in an arc. The targets angle away from the field sometimes as singles and sometimes in pairs that cross within three feet of each other.

Two students at Northeast Academy here, Josh Duncan and Luke Baker, finished with perfect scores of 200 (20 hits at 10 points per hit). They, along with nearly 40 other shooters qualified for the Shotgun Shoot off.

“It was 38 people in the Shoot-Off and we went through five of seven rounds of doubles,” said Duncan.  “Me and another two guys (Sam Eddy of Ronald Reagan High in Pffaftown – outside Winston-Salem – and Jacob Payne of High Point Andrews) just kept going back and forth, so it was pretty rough.” 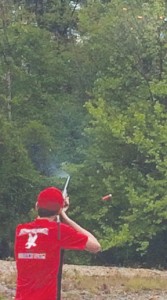 Josh Duncan shoots in the early rounds of the competition. The sporting clays are barely visible in the upper right hand corner. Contributed Photo

Eventually, the competition came down to Duncan and Payne, and a test of nerves under pressure.

Despite the adrenaline rush that the close competition produced, Duncan said his experience as a woodsman helped him keep his cool.

“The best thing to do is just to try to keep your emotions under control and just try to tune everybody out until everything else is over with,” Duncan said. “You have to keep your focus.”

“This was really important to me,” he emphasized. “It’s one of the things I look forward to every year and I know that you get just one shot at it and that feeling you get when you’re doing it only comes once a year and I tried my best to focus as hard as I could on it.”

Adding to the conditions for the shooters was the steady drizzle of rain that fell throughout the competition.

“That did make it a little bit harder,” Duncan admitted. “I just had to keep my glasses clean and just keep on going with it.  It takes a lot of practice, but its well worth it.”

“Actually, most of the hunting I do is deer,” he conceded. “I do enjoy duck hunting, so it’s becoming my favorite.”

Duncan says he’ll return to Ellerbe next spring as a sophomore and hopefully defend his title. He also feels that even though Northeast Academy’s team didn’t finish in the top-three in any of the team competition this year, next year they’ll be a much more seasoned bunch.

“We were just seven points away this year from having a pretty solid score,” he said.

“These competitors are a great reflection of conservation, and exemplary in their skills and commitment,” said Travis Casper, the state hunting education coordinator and tournament director. “Rain didn’t dampen enthusiasm or scores, and other than the inclement weather, the tournament was a success. I can’t thank the volunteers and staff enough for their hard work.”