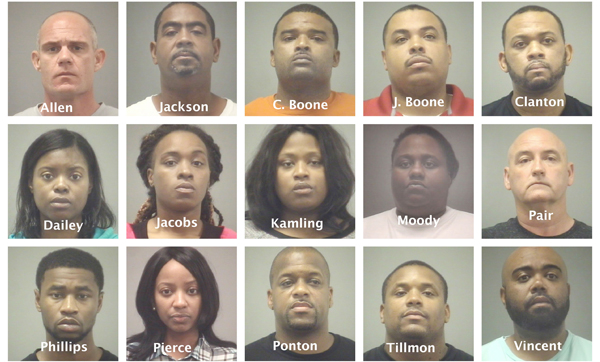 Shown here are the 15 individuals – including 13 law enforcement officers – arrested last week in a police corruption sting conducted by the FBI. Photo composition by Lance Martin/www.rrspin.com

RALEIGH – The motion asking the court to hold all defendants in Operation Rockfish until their trial gives a more detailed glimpse into how the operation came about and what the 15 charged allegedly did.

Additionally, 31-year-old Antonio Tillmon, a member of the Windsor Police Department, was arrested.

“During the course of the investigation, FBI undercover employees posed as members of a large-scale drug trafficking organization (DTO) that transported narcotics and narcotics proceeds between Miami and New York,” the motion reads. “The defendants believed that the DTO had recruited law enforcement officers in every state, from Florida to New York, to protect the DTO’s transport operations within that state’s borders.”

Walker writes that the defendants understood that they were recruited to work for the DTO because of their status as law enforcement officers or ties to law enforcement. “Positions,” the document says, “that gave them the unique authority to protect the drugs from both law enforcement and criminals.”

The United States attorney says that, “Through the course of its investigation, the FBI captured the vast majority of the defendants’ conduct on extensive audio and video recordings and in surveillance photographs.”

The investigation led to a 54-count indictment that was unsealed on Thursday of last week, charging all defendants for, among other things, their participation in a drug distribution conspiracy spanning a period of one and a half years.

The indictment also charges all defendants with conspiring to use and carry firearms during and in relation to drug trafficking offenses. These conspiracies encompass multiple acts of possession with intent to distribute cocaine and heroin and the use and carrying of firearms during those offenses, as outlined in the indictment. Certain individuals are also charged with extortion, money laundering, and bribery.

“The defendants are responsible for transporting over 100 kilograms of what they believed to be cocaine and heroin as it moved through South Carolina, North Carolina, Virginia, and Maryland. Many of them carried firearms while doing so in order to protect the drug load from other criminals,” the motion reads.

Walker continues, saying the evidence against the defendants establishes a sophisticated conspiracy involving the transport of multiple drug loads, each consisting of at least 10 kilograms of cocaine or heroin.

“These offenses create a clear danger to the community,” he stated in the motion.

The charges include the use and carrying of firearms demonstrated the reckless and dangerous consequences of their criminal conduct, Walker said.

The money laundering charges, he wrote, reflect that the defendants transported what they believed to be narcotics proceeds from out-of-state drug sales. Each money run involved amounts ranging from $250,000 to $1.5 million.

“With the exception of Crystal Pierce and Tosha Dailey, each defendant was a current or former law enforcement officer or correctional officer,” the motion says. “These defendants accepted cash from what they believed to be members of a large-scale drug trafficking organization in exchange for using their status and badges to protect and harbor egregious criminal activity within the state of North Carolina. They took an oath to uphold the laws, but instead sold their office for corrupt and dangerous purposes. The nature and circumstances of the offense weigh strongly in favor of pretrial detention.”

At trial, Walker notes, the government will prove the defendants’ guilt through audio and video evidence showing the defendants planning and executing the transport of narcotics and narcotics proceeds, often while visibly armed.

The government will also offer at trial other physical and documentary evidence and the testimony of multiple witnesses, including FBI undercover employees.

While most of the defendants do not have a criminal history given that almost all of them worked as law enforcement or correctional officers, evidence, Walker says, “Will establish that most of the defendants participated in criminal conduct for an extended period of time. Further, the government will show that each defendant that worked in law enforcement or corrections abused his or her position and violated the very laws he was sworn to uphold. The government will provide particularized evidence during each defendant’s respective bail hearing.”

Wrote Walker, “The seriousness of the danger posed by the defendants’ release cannot be overstated in light of their affiliation with what they believed to be a large-scale drug trafficking organization, and their participation in the possession of narcotics with intent to distribute them to the community, their possession of firearms, and their status as current or former law enforcement or correctional officers.

“Based on these relevant factors and the statutory presumption discussed above, each defendant poses a serious danger to the community and should be detained pending trial,” the motion stated.

The defendants are serious flight risks, the motion says. “Each defendant faces up to life imprisonment on count one alone (conspiracy ongoing since around Nov. 7, 2013 to involve the movement of one or more kilograms of heroin and five or more kilograms of cocaine). Further, each defendant is charged in at least one crime that carries a substantial mandatory minimum penalty.”

The mandatory minimum penalties are as follows:

“The severity of each defendant’s possible sentence gives them a substantial incentive to flee,” Walker said.

All 15 defendants were scheduled to appear in Federal District Court in Raleigh on May 6-7 where bond for their alleged crimes is to be established.

(Lance Martin is Editor and Publisher of www.rrspin.com and granted permission for the publication of this story.)