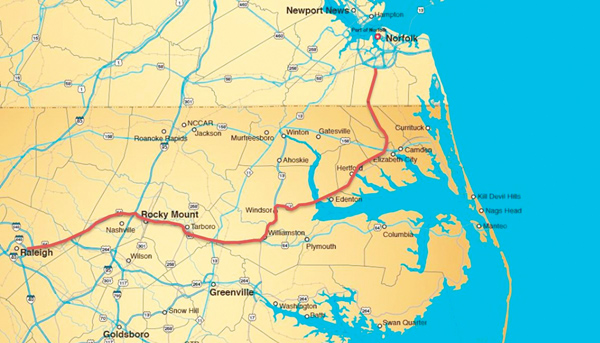 A red line shows the planned route of a proposed Interstate highway between Raleigh and the Hampton Roads area of Virginia.

Since 2013, Governor Pat McCrory and the Regional Transportation Alliance (RTA) have been pushing to expand US-64 between I-440 in Raleigh and I-95 near Rocky Mount as part of the future Interstate Highway system.

Now a movement is afoot to expand it beyond I-95 by conjoining it with US-64 into eastern North Carolina to US-17 and on northward into Virginia, thus passing through Bertie County.

Earlier in April, state Transportation Secretary Anthony Tata met with local leaders brought together by the NCEast Alliance on the possibility of using this route to connect North Carolina’s Triangle area with Hampton Roads.

The US 64 east freeway is Raleigh’s first and only direct free-flow highway link to the northern and mid-Atlantic states. An Interstate designation for the US 64 freeway east of Raleigh would be a logical addition to the overall Interstate system, as it would provide a direct northbound Interstate connection between the North Carolina state capital and the most prominent east coast Interstate, I-95 at Rocky Mount.

The RTA has requested that the state Department of Transportation apply to reserve an Interstate number for the corridor between Raleigh and the Hampton Roads region of Virginia via Rocky Mount and Elizabeth City, consistent with the existing Federal High Priority Corridor 13 from Raleigh to Norfolk.

This proposed corridor would follow the US 64 east freeway from I-40/I-440 at Raleigh, east past I-95 at Rocky Mount towards Tarboro and Williamston and then travel the US 17 corridor via Elizabeth City and then connecting to Chesapeake and Norfolk, Virginia in the Hampton Roads region.

This corridor reservation will commence the first step needed to create a future Interstate link from Raleigh to I-95 at Rocky Mount to I-64 near Norfolk via Elizabeth City.

With the understanding that market accessibility is of primary importance to recruitment and retention of industry and general commerce, a group of nearly 60 gathered in Williamston to discuss the project, which has been given the moniker “I-44”.

Secretary Tata provided an update on the state’s work along the corridor to upgrade the current infrastructure to interstate standards and next steps for building support for the designation.

“What is the artery that is going to feed all of the business development that we are going to do?…that of course is this 64/17 future interstate designation,” said Tata, noting that he had been in conversation with Governor McCrory on the highway, stating that “the opening of this artery is a key part of the governor’s 25-year vision.”

“Collaboration between all counties from Nash to Currituck; working with Virginia DOT and our elected representatives in Washington, D.C., I believe is a first of its kind in North Carolina,” said Theresa Pinto, President of the Rocky Mount Area Chamber of Commerce.

Meanwhile, at the monthly meeting of the Bertie County Commissioners held in Kelford on April 20, Mark Finlayson of the Highway 17 Association briefed that group on what’s been named “the I-495 Initiative”.

“Our charge is to improve US-17 from Virginia to South Carolina to the best we can,” Finlayson said. “At the very least we need to get the two-lane stretches of road four-laned.”

Finlayson said in 2006 when the group re-organized there were about 55-60 miles of two-lane left on US-17; but that with the ground-breaking of the Jones County highway project later this year, that number will be reduced to about 30 miles.

In the 13 counties that make the corridor from border to border, Finlayson said $1.3 billion has been invested in some 11 projects comprising the State Transportation Improvement Program (STIP); but that over $360 million was considered un-funded.  However, a peek at the Governor’s proposed budget reveals a $1.3 billion bond project for which the General Assembly must first authorize a referendum be offered to the public, and then that has to be approved by the voters.

“So, of course, there are a lot of ‘ifs’ associated with that,” Finlayson remarked.

He stated his group would very much like to incorporate communities along US-64 from Wake County to Williamston into the Highway-17 Association so that this coalition can advocate for the Interstate as one voice.  He also noted that Raleigh and Norfolk are the two largest cities in the country only served by one interstate (I-40 and I-64, respectively).

“We’re fortunate that the stretch from Norfolk to Williamston is part of that corridor,” Finlayson stated. “And we felt we’d be a lot stronger as a larger group pulling together toward a common purpose.”

Finlayson said there are several steps in the process, beginning with persuading the U.S. Congress to authorize the future I-44 legislation as either a stand-alone bill or as part of the re-authorization of the Federal Surface Transportation Act.

Commission Vice-Chair Tammy Lee, who attended the Williamston meeting with Secretary Tata and company, along with fellow Commissioners Ernestine “Byrd” Bazemore, Stewart White, and County Manager Scott Sauer, said the dialogue that has begun is encouraging.

“It’s just a much safer facility, and has to carry much higher speeds,” he said. “It increases safety, increases mobility, and obviously creates job opportunity because companies want to locate along interstates to take advantage of a good road to get their goods and services to port.”

Lee re-iterated that Virginia’s transportation space has become challenging and businesses are coming to North Carolina.

Finlayson says on the state level it’s imperative to get all the US-17 projects back on the STIP since many are not top priority under the State Transportation Initiative (STI).

“The distribution of funding accomplished under the STI was very unfair to rural areas because we don’t have the same congestion as Charlotte or Raleigh,” he said. “Division-I (the rural northeast) needs about $250 million over the next 10 years of the STIP while Division-5 (Raleigh) needs $2.6 billion; giving them 10 times more money over the same 10 year period and (the northeastern region) has to manage the ferry system out of that budget.”

Finlayson said the only Interstate project on the current STIP is for minor improvements along US-17 around Edenton, which is already a well-maintained stretch of road so not much would be required to bring it up to interstate standards.

“If we’re serious about an interstate in this area, then we need to do more than that,” he emphasized.

Finlayson wrapped his presentation before the Bertie Commissioners with the four questions he asked in Williamston: (1) will the Interstate happen anyway just because it’s “a really good idea”?… (2) will it happen on a timely schedule?…because it takes about 10 years even under the best of circumstances…(3) will the funds be available to do it under the STI?… and, (4) will changes in the governorship change the project?

“We have a narrow window of opportunity here to work with this administration which is committed to this project and we need to get as much done before they leave office as we can,” Finlayson said. “We want to reach out to anybody who’ll listen, and hopefully pull this together.”

Chairman Ronald D. “Ron” Wesson said if there’s anything Bertie County can do, they’d like to push things forward as best they could.

“We need it now, not 10 years from now,” said Vice-Chairman Lee.