TUNIS – A Winton man has to consider himself ‘dog-gone’ lucky after his encounter Wednesday with an aggressive canine.

Kenny Parker was clearing grass and bushes on a vacant lot he owns at 126 Tunis Road for about an hour around 10:40 in the morning when he says a large 20-plus pound grey pit bull dog emerged from the woods and began growling at him. 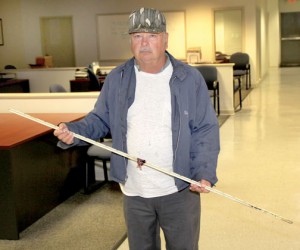 Kenny Parker of Tunis displays a four-foot fiberglass pole he used to ward off an attacking dog on Wednesday. Staff Photo by Gene Motley

“I’d walked towards the front of the lot by the driveway when the dog comes out of the woods and began barking at me,” Parker recalled in an interview with the News-Herald. “I did not know the dog, but I had seen the dog before and knew that he had come from the Kenny Newsome’s residence over there.”

Parker says his lot is some 300 feet from the Newsome property, separated by a small stand of woods.

Parker said at first he paid little attention to the dog, even hollering at the animal to go back home, but his shouts were ignored and he says the dog kept advancing.

“He was really growling and really aggressive, and I knew I was into a problem then,” Parker said.

Having left his tools back where he was working, Parker says the only thing he could seize for protection was a four-foot fiberglass electric fence pole that was sticking out of the ground near his driveway.

“I immediately pulled it out of the ground and used it to keep the dog at bay,” he says. “I thought once he saw me with the pole he might turn around and run on back home, but he did not.  He never retreated, he kept coming forward.”

Alertly reaching in his shirt pocket, Parker says he pulled out his cell phone and dialed 911 for the Hertford County Sheriff’s Office.

“And I told them, he (the responding deputy) had better bring a gun,” Parker warned.

“Normally, I keep it (the phone) in my truck for fear of it falling out of my pocket, but that day I’m glad I had it with me,” he added.

Parker says what seemed like an eternity with him holding the dog at bay from a distance of 20 feet with his slender pole was only about 12-15 minutes.  That’s when he says Hertford County Sheriff’s Deputy, Lt. Jesse Fennell, arrived in his cruiser with Parker frantically flagging him down.

“When he got out of his vehicle, he couldn’t see the dog because (the animal) was on his blind side,” Parker said. “But then the dog lunged at him and I think that’s when he realized how serious the situation really was.”

Parker says Fennell told him county Animal Control was right behind him and they, along with two more Sheriff’s cruisers, arrived a couple of minutes later.

“We were well protected,” Parker humorously recollected. “It felt good to see them all.”

Uncertain of the dog’s ownership as the animal continued to bark and growl aggressively at his surroundings, Parker says one of the officers approached the Newsome residence and that Newsome’s grandson Timmy Jones, who lived at the residence, came out and admitted to owning the dog.

According to Parker, Jones approached the dog and began loudly calling the animal by name.  Seemingly caught in a moment of recognition, Parker said the animal seemed to lose its hostility and slowly retreated back into the woods toward the Newsome home.

After consulting with both parties, Parker says the dog was confiscated at the residence and confined by Animal Control.

Hertford County Sheriff Juan Vaughan said the dog would not be held for ten days, but instead would be released Friday back to its owner; but the owner would have to pay for a $10 rabies vaccination along with a $50 nuisance fee.

“The owner must keep the dog on his own property,” the Sheriff said, “and if the dog is ever off the owner’s property, he must be on a leash.”

Parker says as he understands the law, after confinement and a fine, the animal may be released back to its owner; something he said he does not agree with.

“They didn’t even do what I would call an official report,” Parker complained.

“Turning him back loose after ten days, I do not agree with at all, but, anyway …” he shrugged. “This dog has no business running at large being loose on its own by itself; but that’s the procedure.”