SUFFOLK, VA – The driver that allegedly triggered a Feb. 10 wreck on US 13 that claimed the lives of two Bertie County women now faces charges. 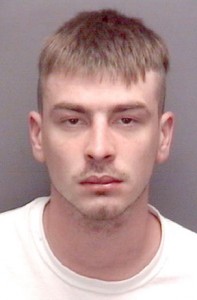 Johns was charged with two counts of aggravated involuntary manslaughter, and one count each of DWI, possession of heroin, texting while driving, failure to obey highway marking, possession or distribution of drug paraphernalia, and possession of a gun while in possession of a Schedule 2 drug.

He is currently being held without bond at Western Tidewater Regional Jail.

The Feb. 10 accident occurred just north of the state line in the 8700 block of Whaleyville Boulevard (US 13). There, Teresa Brooks Brown, age 60, and Bernice Ping Brooks, age 84, mother and daughter from Colerain, were killed.

Brown, who was driving her mother to a medical appointment in Norfolk, VA at the time of the 8:05 a.m. accident, was northbound behind the wheel of a PT Cruiser. Johns was southbound, driving a minivan, when his vehicle crossed the centerline and struck Brown’s Cruiser head-on.

Both women were pronounced dead at the scene.

Following an investigation by the Suffolk Police Department, Johns was determined as the at-fault driver in the fatal accident. The charges were lodged against him following a review of the case by the Commonwealth’s Attorney’s Office.