STAFFORD, VA – A police officer shot and killed Monday morning as he left for work from his Stafford County, Virginia home is a native of Gates County. 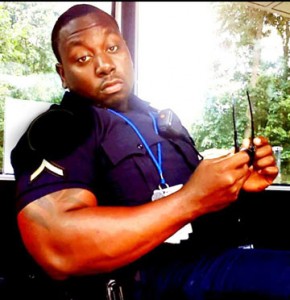 Jeremy Brown was a police officer working at the FBI Training Academy.

Jeremy Brown, 29, employed as a police officer at the FBI National Academy in Quantico, VA, was murdered outside his home in Stafford County, according to an online story at www.washingtonpost.com. Stafford County is located in the Fredericksburg’s area along I-95.

In a statement released by the Stafford County Sheriff’s Office, was confronted by Antoine Gray Johnson, 26, of Upper Marlboro, Maryland. The statement said that multiple witnesses described Johnson and his vehicle and said that they heard gunshots.

Johnson left the scene following the shooting. A deputy from the King George County Sheriff’s Office saw Johnson in his vehicle 20 minutes later, traveling on US 301. Johnson had a handgun of the same caliber of the one that killed Brown in his car, the Stafford Sheriff’s Office said. He was arrested and charged with first degree murder.

It was not clear whether the killer’s motive was related to the victim’s job as a police officer for the FBI. It was reported that Brown was in uniform at the time of the shooting.

William Kennedy, a spokesman for the Stafford Sheriff’s Office, said Johnson and Brown knew each other. But it was not clear what sparked the shooting, Kennedy said.

An FBI spokesman said that Brown worked as a police officer at the FBI National Academy since August of 2009.

The News-Herald learned that Brown formerly resided on Sugar Run Road in Gates County. He graduated from Gates County High School in 2003 and pursued a career in law enforcement through classes at Elizabeth City State University.

“He interned for us while a student at ECSU,” said Randy Hathaway, Chief Deputy for the Gates County Sheriff’s Office. “I remember him telling us that when he left here that he was going to work for the FBI.”

Hathaway added that Brown previously worked as an officer at the Pasquotank County Correctional Institution in Elizabeth City.

“He was a typical male student, one who loved athletics; he played on our football team and was a good student,” said Hofler, now the chair of the Gates County Board of Commissioners. “He was never in any of my classes, but when I would see him in the hallways of our school he was always polite and well-mannered.

“Personally and on behalf of Gates County, my condolences go out to his family,” Hofler closed.