WINDSOR – Heroes come in all different shapes and sizes, and the efforts they support are varied as well.

Recently, a sophomore at Bertie Early College High School added her name to the “hero list” by donating hair to Locks of Love. 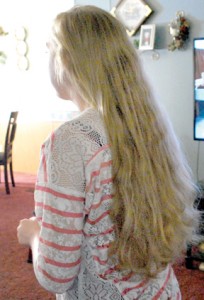 Haley Belangia of Windsor is shown before (above) and after (below) having her hair cut, which she donated to Locks of Love – a group dedicated in providing hairpieces to financially disadvantaged children in the United States and Canada under age 21 suffering from long-term medical hair loss from any diagnosis. Contributed Photos

Haley Belangia said her heart weeps for those who have lost their hair due to the side effects of undergoing medical treatments for cancer and other diseases.

“I was inspired to donate my hair by seeing people suffer from many different illnesses such as cancer,” said the 16-year-old daughter of Steve and Beverly Castelloe of Windsor and Al Belangia of Ahoskie.

“I just want everyone to be confident in themselves,” she continued. “The loss of hair can really put a huge dent in people’s self-confidence.”

While she has never suffered hair loss due to undergoing cancer treatments, the teen added she totally understands the effects of lacking confidence.

“I, myself, have suffered from self-confidence issues,” she admitted. “I can’t imagine how bad it could get if I were to come down with an illness that caused hair loss. Everyone deserves to be happy with themselves and believe in themselves.”

Belangia, who wants to pursue a degree in Marine Biology after graduating, from high school, is fortunate to have a great role model to follow. Sierra Jernigan, a Bertie Early College graduate and currently a junior at East Carolina University where she is majoring in Special Education, was called upon to cut Belangia’s hair. 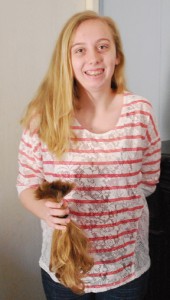 “Sierra has a passion to help others,” said her mom, Amy Jernigan of the Elm Grove community in Bertie County. “She first got involved with Locks of Love at the age of seven by donating her hair and now has cut over 25 ponytails for girls and women who desired to donate their hair to that organization. I commend Haley for wanting to help others.”

Like Belangia, Sierra Jernigan knows what it’s like to struggle with self-confidence issues as she has worn hearing aids since the age of four.

“She struggled with that early on, but I’m so proud of the woman my daughter has become,” said Sierra’s mom.

Sierra currently holds the title of Miss NC Unite and will represent her state at the national pageant to be held in Nashville, Tennessee in July. Her theme at the national event is: “I’m a survivor: the fight against bullying.”

Sierra recently took part in the production of two short Christian films in Winchester, VA. “The Forth Question” is currently airing on public television in Winchester and “The Weight of a Prayer” is still being finalized. 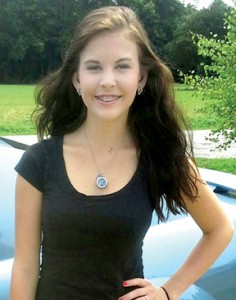 Bertie County native Sierra Jernigan, now a junior at ECU, has cut over 25 ponytails, to include one for Belangia, that have been donated to Locks of Love. Contributed Photo

Locks of Love is a public, non-profit organization that provides hairpieces to financially disadvantaged children in the United States and Canada under age 21 suffering from long-term medical hair loss from any diagnosis. The organization meets a unique need for children by using donated hair to create the highest quality hair prosthetics.

Most of the children helped by Locks of Love have lost their hair due to a medical condition called alopecia areata, which has no known cause or cure. The prostheses they provide help to restore their self-esteem and their confidence, enabling them to face the world and their peers.