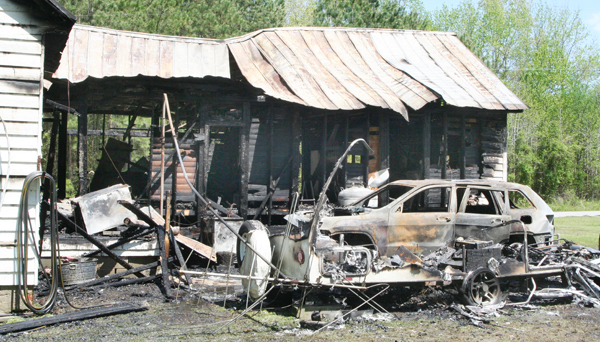 A home near the Bertie-Hertford County line was destroyed by fire on Tuesday. Staff Photo by Gene Motley

COLERAIN – A gruesome discovery by Bertie County Sheriff’s deputies responding to a fire-alarm call revealed a gunshot fatality in the woods near a home here Tuesday afternoon.

Upon coming closer to the source of the smoke (at 121 Big Mill Road) they found a camper and a vehicle behind a house completely engulfed in flames and the fire spreading to the home.

When emergency personnel arrived they assumed the resident of the home might be inside and an extensive search of the entire area around the house began.

A short time later, approximately 150 feet behind the house, deputies made a grim finding: in a clearing in the woods that appeared to be a pet cemetery with stone and 2×4 wood grave markers, a human and a canine, a black Labrador, were discovered, both appearing to have suffered gunshot wounds. Bertie EMS personnel attempted lifesaving procedures, but the victim, a 79-year-old male, was unresponsive and he was pronounced dead at the scene.

A .45 caliber firearm was found near his body with two rounds expended.

Bertie EMS later transported the gunshot victim to Vidant Medical Center in Greenville where an official autopsy was performed. Preliminary results indicated that the man, later identified as William Howard “Crook” Bell, Jr., apparently took his own life after first shooting the dog.

In the meantime, after the fire was completely extinguished, Sgt. Ed Pittman, Chief Investigator with the Bertie County Sheriff’s Office, and Reid Sasser, Arson Investigator with the North Carolina State Bureau of Investigation (SBI), conducted a crime scene investigation.  Sgt. Pittman said it was believed the fire originated at the camper and the vehicle, which was a Jeep, because of the presence of a strong odor of gasoline. Pittman added that residue was collected at the scene and will be sent to the State Arson Lab in Raleigh to be examined for the presence of petroleum-based substances.

It is not known at this time if Bell set the fire to the camper and the vehicle prior to taking his life.