WINDSOR – Call it a lifeline.

With their post-season hopes sinking thanks to a trio of Northeastern Coastal Conference losses, Bertie High found salvation here Thursday night in the strong arm of senior Alex Harmon.

The right-hander tossed a no-hitter, and used both those arms to drive in the only run he and his team would need for a 1-0 shutout of Elizabeth City Northeastern. 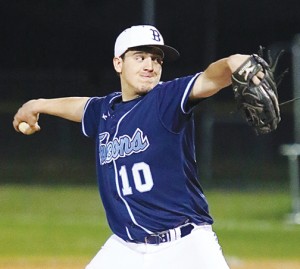 The win moved the Falcons past the Eagles and into fifth-place in the league standings, a game out of the all-important fourth spot needed to get into the post-season; and Bertie can claim that on Tuesday night with a win at Currituck.

“I have been watching Alex pitch his whole life and that’s about as good as I have ever seen him throw it,” said a grinning coach Bobby Harmon.  “I mean coming off an injury, he had a little rust there in the first inning, but he was like a machine from then on: no hits, 79 pitches, and at one time retired 18 in a row….pretty impressive.”

The no-hitter almost didn’t come to be.  In the top of the first, Northeastern got back-to-back walks and an error to load the bases.  However, twice Eagle runners were caught stealing and all threats ended with a fly out.

Bertie opened their half of the first with Matthew Weaver getting a base hit.  One-out later, Weaver stole second base just ahead of Harmon’s towering blast to the centerfield fence that scored Weaver for what would be the only run the Falcons would need on the night.

Harmon then retired the next 17 batters in a row (18 going back to the first inning fly out!): seven ground-outs, one unassisted, four fly ball outs, and five strikeouts. The next walk he surrendered would come with two outs in the top of the seventh.

Bertie threatened some insurance, first in the fourth when Jaycob Damo doubled with one out, but was left stranded; and in the bottom of the fifth when the Falcons loaded the bases with one out, but the next batter hit into a force play at home plate and a ground-out ended the inning.

After getting his fourth base-runner of the night in the top of the seventh with two outs, Harmon got a groundout to end the inning and allow his teammates to celebrate his accomplishment with him.

“We needed a big time performance and he gave us one, and (Michael Scott) caught a great game” said the coach, this time sounding more like the proud-papa he was.  “We played really good defense as well.  Now we need to build on this heading to Currituck.”

Both Weaver and Damo were two-for-three, with Harmon and Tommy Cowan getting the other two hits apiece.  Ge’Dari Liverman went the distance, surrendering those six hits, and is saddled with the loss for Northeastern.

Bertie (9-8, 3-5, NCC) climbs over .500 with the win and has the weekend off before heading to Currituck for next Tuesday’s showdown.