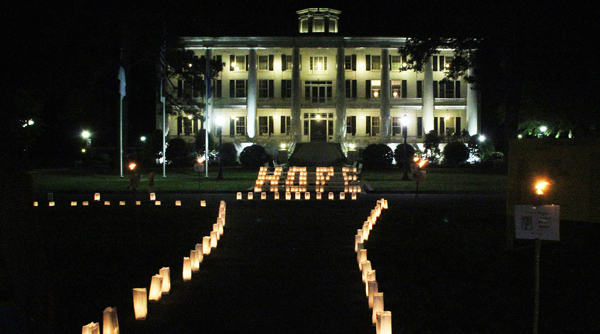 Hope is the key word at Relay for Life as those four letters are spelled out by candle lit luminaries in front of the historic Columns Building at Chowan University. Staff Photo by Cal Bryant

But the real winner at the 15th annual Hertford-Gates Relay for Life, held this past weekend at Squirrel Park on the campus of Chowan University, was educating those in attendance that cancer shows no mercy when it comes to age. 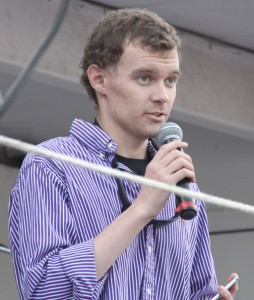 Cancer survivor Caleb Topping of Ahoskie served as the keynote speaker at the 2015 Hertford-Gates Relay for Life. Staff Photo by Cal Bryant

Caleb Topping of Ahoskie is just 19 years old. The 2013 graduate of Northeast Academy was a typical young man….an athlete who loved playing football, basketball, and baseball….that is until he was diagnosed in January 2014 with acute lymphoblastic leukemia.

Fifteen months and numerous medical treatments later, to include a bone marrow transplant, Topping is attempting to pick up the pieces and start his life over.

“My life revolved around a little bit of everything….my family, church (Union Baptist), my fiancée, sports and hunting and fishing,” said Topping, addressing nearly 1,000 individuals attending Friday’s opening night event. “I’ve always been pretty healthy, so imagine the shock when learning that I was suffering from cancer.”

The warning signs began with a small rash on his body, followed by extreme fatigue and back pain. The latter became so severe that he paid a visit to the emergency room at Vidant Roanoke-Chowan Hospital. 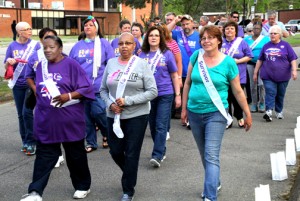 “I’ve never been in that much pain in all my life,” Topping recalled. “At the ER, they drew blood and noticed something out of whack.”

“I asked what were my options; when can I start treatments; I’m ready to get this over with and get back to my life,” said Topping.

Chemo treatments began that night in Greenville and lasted for the next six months, forcing Topping to drop out of the industrial systems technology program he was enrolled in at Roanoke-Chowan Community College.

In June of 2014, Topping learned he needed a bone marrow transplant. Two bone marrow drives – one each at Union Baptist and Northeast Academy – were conducted in advance of the procedure performed at UNC Hospital in Chapel Hill.

One month later, his cancer returned (following a brief remission due to the chemo). He was admitted to UNC Hospital for another round of chemo. 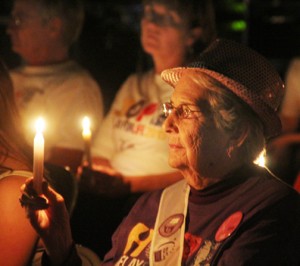 The warm glow of a candle illuminates the face of a cancer survivor during Friday night’s portion of the annual event. Staff Photo by Cal Bryant

“By the time I was in remission again it was September,” he noted. “My bone marrow transplant took place on Sept. 4….a day I consider as my new birthday. Everything went well over the next few months, until learning I had EBV (Epstein–Barr Virus), which sometimes is a side affect of a bone marrow transplant. I had to go to New York to get treatments for that.”

If the news couldn’t get any worse, it did. Three weeks after the treatments to cure EBV, Topping’s cancer returned.

“This time because the EBV treatments weakened the donor cells from my transplant,” he said.

Upon returning to Chapel Hill, his doctor there informed Topping of some good news – there’s a new cancer-fighting drug just recently approved and on the market. The bad news was the drug was only available at that time in California and Texas.

“Oh well, I’ve been away from home for almost seven months and now it seems I’ve got to be away for another possible three months,” Topping remembered saying to himself at that time. “One week later my doctor calls and tells me the drug is coming to UNC…what a relief that was.”

To date, Topping has received two 24-day “cycles” of the new drug and is preparing for yet another dose.

“I’m in a pretty good remission right now,” he smiled. “For those hearing this story, those diagnosed with cancer and going through treatments, all I can say is look on the bright side and remain positive.

“I could have ask God…why me,” he continued. “But I didn’t. Rather I turned to God and asked what can I do with this; how can I use my condition to help others. I hope hearing my story will help.”

Friday night’s Relay opener also included a tribute to the Artie Johnson of Windsor who died April 1 due to complications with diabetes. Johnson, a longtime supporter of Relay for Life in his native Bertie County where he served numerous stints as chairman, was one of the driving forces behind the birth of the Hertford-Gates Relay. 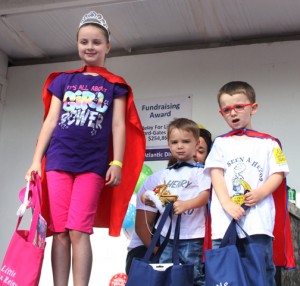 From left, Carly Piland, Daniel Hodges and Henry Hodges were respectively crowned Little Miss and Little Mr. Relay on Saturday morning. Each was recognized as the top fundraisers for the Kid’s Walk portion of Relay. Staff Photo by Cal Bryant

“We have shared our favorite Artie stories all day,” said Rochelle Harrell, a past chair of Hertford-Gates Relay. “Lynn Fields, who served Artie’s original co-chair here, shared how this all started, saying that after a Bertie Relay event back in the late 1990’s, they were sitting on a bench and he put his arm around her and said we should start a Relay in Hertford County.

“Well, look around you, what you see here today is all Artie’s dream,” Harrell continued as she choked back the tears. “Even this stage I’m standing on was Artie’s dream. But the dream has not ended. Artie dreamed of a cure for cancer and that work is not finished. Because of Artie Johnson we are celebrating 15 years of Relay and we’re   not going to stop until that cure is found.”

After “relaying” all night, and a half day Saturday, Hertford-Gates Relay for Life raised $188,243.49. Fundraisers for the current Relay year continue through the end of August, allowing for additional opportunities to increase that number.

“We had a great turnout this year; the weather was great and the people were very supportive of our efforts to eradicate cancer,” said Angie Plaunty, co-chair of this year’s Relay.

Plaunty said while she has seen teams stick with the local Relay over the course of the past 15 years, others have opted to not return on an annual basis.

“The good news is those teams are being replaced by newer ones, so the cycle continues,” she noted.

“We may not exceed our goals, but we are thankful for a very supportive community that is the backbone of Relay for Life here,” added co-chair Shannon Pittman. “It’s important for us to continue to get out and attract new blood, new teams. We want to do a better job of reaching out more to young people….I think the message that Caleb delivered Friday night will help us in that effort. We’re in charge of training the younger ones as they are the next generation of Relay.”

Plaunty said a portion of the new faces at Relay are those just recently diagnosed with cancer or who have just learned of a family member with the disease.

“We’re here to help them, as well as those who’ve been battling cancer since we started the Hertford-Gates event 15 years ago,” Plaunty remarked.

Both women would prefer not to hold a 16th annual Hertford-Gates Relay for Life. That would mean a cure for all cancer has been discovered and the treatments are working.

“If we do find a cure for cancer, I would reach out and join another fundraising effort and build that like we’ve built Relay over the years. If there is no immediate cure for cancer, I’ll be right back here next year and beyond, no matter how long it takes,” Pittman concluded.