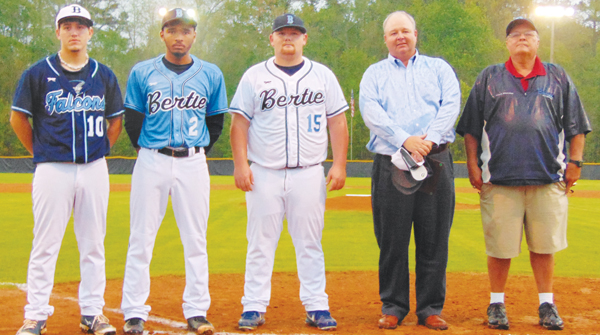 WINDSOR – Maybe they were tears of joy from heaven.

Cooke, who passed away last January, served the Falcons as head coach in a trio of capacities: varsity football, baseball, and girls basketball.  He began his tenure with the program as an assistant football coach to Chip Williams and also served for a time as the school’s athletic director. 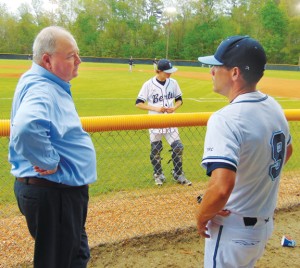 As a player in the background wears one of the uniforms during pre-game warm-ups, Ronald D. Cooke (left) chats in the dugout with current Falcons baseball coach Bobby Harmon (right). The late coach’s initials, ‘REC’, are visible on the sleeves of the new uniforms. Photo by JW “Russ” Russell

With his passing, Cooke’s estate donated three new sets of uniforms for the varsity baseball team.

“My wife Heather and I decided to give a gift to Bertie baseball in memory of my dad,” said the younger Cooke.

Whitaker, who not only played for Cooke while a student-athlete at Bertie, but later was Cooke’s assistant baseball coach before taking over the program in 1997.

“This generous donation means a lot to the program,” Whitaker said. “It helps us tremendously and allows us to enrich other areas.

“Coach Cooke was not only a mentor to me, but a lifelong friend.  I learned a lot of the things I know today because of him. He took the time when I got into coaching to show me the right way to do things. Over the years there is no telling how many games we went to because every one of them was always a teaching moment,” Whitaker recalled.

Current Falcon head coach Bobby Harmon, who also played for Cooke, considers the late coach one of the founding fathers of Bertie athletics.

“He won countless conference championships and laid the foundation for everything Bertie baseball stands for today,” Harmon said.

During the ceremony, Harmon proudly read the inscription on the plaque to the fans and supporters in attendance at the donation ceremony.  Later, when introduced, Cooke’s proud son received a standing ovation from the Bertie fans.

Cooke, his wife Heather, and their three daughters, Ashley, Sydney, and Emily, currently reside in Cary, near Raleigh, where Cooke is an assistant softball coach in nearby Apex.  Sydney, meanwhile, is on the Lufkin Road Middle School softball squad and also plays for a traveling team, the North Carolina Challengers.  The girls’ paternal grandmother, Reta Waters, still lives in Bertie County.

“My dad was athletic director when I played baseball under Coach Jack Curlings,” recalled Cooke. “Keeping with that tradition I now coach softball and encourage my daughters to learn what was one of their granddad’s greatest loves.”