WINTON – A Winton woman is very fortunate there was no loss of life or personal injury after a late evening blaze destroyed the kitchen in her home and did an undetermined amount of damage. 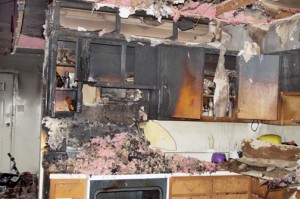 The major damage inflicted by a Tuesday night residential fire in Winton was confined to the kitchen area of an apartment. Contributed Photo

According to Winton Volunteer Fire Department Chief Will Liverman, three of his pumper units, and equipment truck, and 18 volunteer firemen answered an alarm call Tuesday night April 14 at 10:30 p.m. to an apartment fire at 119 Freeman Court here.

Firemen battled the blaze, finally extinguishing it in the early morning hours of Wednesday the 15th. The firefighters then remained on scene for another hour for the electrical power at the unit to be disconnected.

The blaze is believed to have started in the kitchen where a woman, who lives in the home, said she was cooking on the stove that evening and later left the apartment, but she could not remember whether she had turned off the stove.  When she returned, the apartment was ablaze and firefighters were called and dispatched.

The apartment was not completely destroyed by the fire, but Liverman says the unit suffered “significant” fire, water, and smoke damage.

The Winton WFD was called back to the residence around 8:15 a.m. the following day because the fire had flared up once again.  This time they were assisted by engines and personnel from the Ahoskie Rural Volunteer Fire Department.

While the reason the fire re-ignited is unknown, it is believed to have been caused by sparks in the ductwork of the stove hood, or possibly sparks that could have re-kindled in the attic.