JACKSON – Tony Burnette and David Harvey are men of their word. 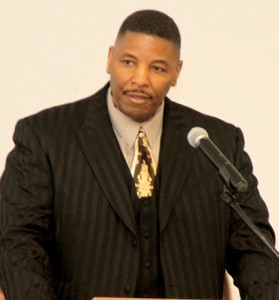 As promised during a March 14 prayer vigil held in Jackson, the two presidents of NAACP chapters in Northampton and Halifax counties respectively said they would schedule follow-up meetings with law enforcement personnel from both counties in a continuing effort to shed new light on the local cases of six missing individuals.

That meeting took place on Friday in Jackson.

“It was very productive,” said Burnette during a telephone interview with the Roanoke-Chowan News-Herald late Friday afternoon. “I thought we came away with some very good ideas as we continue to work to help find some answers for the grieving families of those missing.”

He added that three plans of action were put into place at Friday’s meeting.

“Letters from the Sheriffs in both counties will be sent to the FBI requesting assistance from that agency,” Burnette said. “That’s a big step forward. We appreciate what our local law enforcement agencies are doing in these cases, but we see having the resources of an agency such as the FBI as a valuable tool in the search for these individuals.”

Another plan that will move forward is the erection of one billboard along a well-traveled highway in each county. Those billboards will carry the photos and names of the six missing persons along with contact information for those who may have information to share.

“Having these billboards will keep these cases on the minds of those passing by,” Burnette noted. “Anything we can do to keep these faces in front of the public will help the effort.

“The billboards will also serve as a constant reminder that there are families here in Northampton and Halifax counties who are begging to find out what happened to their loves ones,” he added.

In the case of Shonda Stansbury of HalifaxCounty (missing since Dec. 14, 2006), Burnette said Roanoke Rapids Police Chief Chuck Hasty will write a letter to North Carolina Governor Pat McCrory asking the state to post a reward.

“For some reason, no reward was ever offered in that particular case,” Burnette said.

Also discussed at the meeting was the possibility of getting the national media involved in these cases. The group also scheduled another meeting in six weeks.

Northampton County Sheriff Jack Smith said he was pleased with the meeting.

“We’re putting all our resources together and working with the NAACP. We’re trying to put things in place and looking at getting help from the FBI,” Smith told www.rrspin.com in a Friday interview.

Smith added he believes the FBI would be instrumental because it would have more financial resources as well agents specifically trained in searching for missing people.

“We certainly want to let the families know we haven’t set it aside. We’re interested in the cases of all the missing people. Our primary mission is to do what we can for the victims and families,” Smith stated.

“As we promised at the prayer vigil back in March, the NAACP will stand with the families of these missing people, and we will continue do so until each of these cases are solved,” Burnette concluded.

The vigil, held at the NorthamptonCountyCultural & WellnessCenter, served as a way for family and friends of the six individuals who went missing years ago to recall fond memories of their loved ones as well as soliciting additional law enforcement manpower.