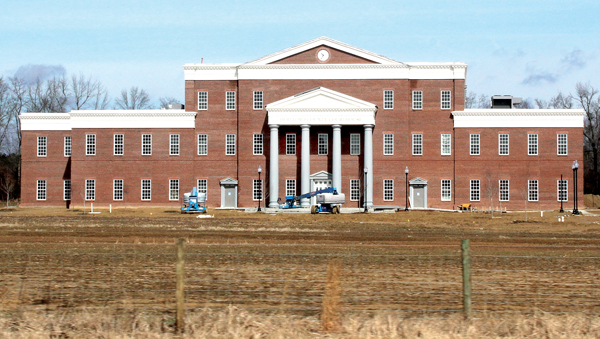 The new Hertford County Courthouse appears complete on the outside, but interior work remains to be finished. Staff Photo by Cal Bryant

WINTON – As the Hertford County Board of Commissioners approved another change order for the county’s new Courthouse and Government Center at their April 6 meeting, the eight-month delay of substantial completion by the General Contractor continues.

Approval of the change order for additional architect, construction administrator, and consultant fees for $19,047.41 was merely a formality, as the services for which the funds were requested were actually completed in March.  The funds will be paid by potential liquidated damages.

Commissioner Johnny Ray Farmer made the motion for approval, seconded by Commissioner Curtis Freeman, and it passed unanimously.

County Manager Loria Williams said she met with the contractor in late March and informed the Board that the mechanical and technical systems for the facilities have been installed.

Williams said the parking lot asphalt has been poured for the Courthouse and Government Center, and that a punch list of only minor items to be cleared up was hopefully going to be ready and submitted by April 20 or 27; the latter date the time the furniture from New Day Office Products and Furnishings is due to be delivered.  She also said the elevator for the building has been inspected and approved.

“We really are in the short rows,” Williams maintained. “There’s a lot of finish work still to be done.”

The County Manager said the third floor of the Courthouse and Government Center has the most completed work and that the contractors are working floor-by-floor toward finalization.

Farmer said he’s still receiving citizen inquiries as to the facilities’ completion and operation date.  While Williams has not revealed a date when the facilities will be operational, she did say a ‘move date’ for all departments would begin on May 18.

As noted in previous articles, the contractor for the two projects – A.R. Chesson Construction Company – has missed the original substantial completion date of Oct. 5 and will pay liquidated damages as outlined in its contract with the county. Previous change orders to cover extended oversight by the project’s architectural firm, as caused by missing the construction deadline, were approved in the amounts of $36,000 and $50,869.31.

That contract has a clause where Chesson is responsible for up to $2,500 per day in liquidated damages for each day the project runs past its original completion date of Oct. 5, 2014.

The construction contract for the duel projects was awarded to Chesson on Dec. 4, 2012. It involves the Courthouse, a three story facility encompassing 45,456 gross square feet, that will house all departments in the existing courthouse plus the District Attorney’s Office and Child Enforcement Office, both currently in Ahoskie.

Additionally, the project includes a single story Government Center (10,385 gross square feet) that will be built adjacent, but not connected, to the courthouse. That facility will house the county manager’s office, tax collection office, tax assessment office, land records, finance office and economic development (planning and zoning) office. In turn, that space in the current administration building in Winton will be used by Hertford County DSS.