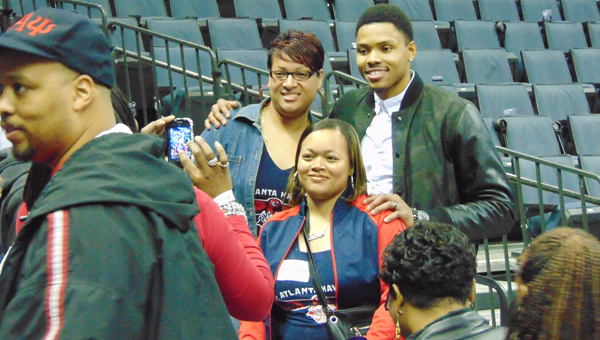 Bertie High School grad and current Atlanta Hawks player Kent Bazemore (right) poses for a photo with two of his Bertie fans – Takiyah Leary (left) and Tamera Lee (foreground) – after they joined others on a bus trip to Charlotte to see Bazemore play. Photo by J.W. “Russ” Russell

Kent Bazemore is no exception. 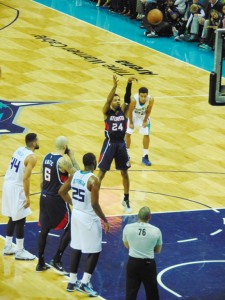 Kent Bazemore lifts a shot from the free throw line, part of his career-high 20 points while playing in front of a group of local fans who made the trip to Charlotte. Photo by J.W. “Russ” Russell

In keeping with that family tradition, Kent’s mother, Glynis, organized a road trip that included members of the Kelford Baptist Church and other fans of ‘Number-24’ from Bertie County and the surrounding Roanoke-Chowan area.

Youngsters, some of whom attended Bazemore’s basketball camp during the summer of 2014 at Bertie High School, were excited about the trip: an excursion to Charlotte as the Hornets hosted the Hawks on March 28.

With all the injuries the Hawks have suffered as the NBA regular season reaches a close and the playoffs begin, the six foot-five inch Bazemore has found himself thrust into Atlanta’s starting line-up.  The Bertie High and Old Dominion University grad is now averaging over five points per game, is third on the team in three-point field goal percentage, and is the team’s top defender.

When the Charlotte game began last month at Time-Warner Cable Arena, the left-hander quickly dropped a three-point bomb and garnered cheers from the crowd, especially the crowd in Sections 101-103.

“They need to give it to Bazemore more,” shouted DayVion Faison, a fourth-grader at Willis Hare Elementary in Northampton County, who was cheering for his hero.

In the end, the Hornets outlasted Atlanta, 115-100, but Bazemore’s performance impressed several Charlotte fans who praised his offensive and defensive skills. One voice of praise included one fan that was draped in purple and teal. 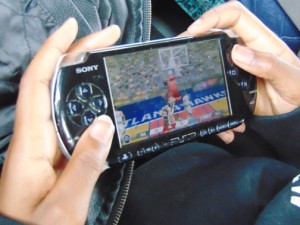 While en route to Charlotte, Raheem Mitchell of Windsor occupies his time by playing a video game featuring his favorite NBA team – the Atlanta Hawks. Photo by J.W. “Russ” Russell

Thomas Gatling, a Class of 2007 Bertie High graduate along with Bazemore, remembers playing neighborhood basketball with the now-pro player.

“He was just-plain all-around good,” Gatling said. “Nobody could block Kent’s shot.”

Arkeem Williams of Lewiston was on the Falcon track team with Bazemore and recalled how great he was in the high jump; a definite benefit in pro basketball.

“He always ran with such long strides,” Williams recalled.

Both classmates were proud of Bazemore’s performance and especially his post-game meeting with the fans.  The Hawks’ leading scorer that night signed autographs and thanked everyone for making the trip.

Jaida and Alison Cherry, both from Hamilton, didn’t make the trip on the Kelford “fans” bus, but instead came by their own means.

“We just wanted to see him again,” said Alison.

The March trip marked the second time a local group has attended a Hawks game to see Bazemore play. In January, members of the Bertie High School band went to Atlanta on a field trip, and the highlight of the trip was seeing Bazemore and the Hawks defeat Oklahoma City and All-Star Russell Westbrook.

With the Hawks having wrapped up the NBA’s Southeast Division and home-court advantage as the Eastern Conference team with the best record, Bazemore’s “extended family” is sure to grow.

G’mareus Faison, who attends Central Elementary School in Jackson, best summed up the sentiments of the fans about the trip.