RICH SQUARE – They came with concerns for their safety.

They left with a plan.

A rash of residential and vehicle break-ins and larcenies have plagued Rich Square for as far back as its citizens and elected town officials care to remember. However, the fact that the number of such crimes are on the rise prompted the presence of a standing-room only crowd at last week’s meeting of the Rich Square Town Commissioners. 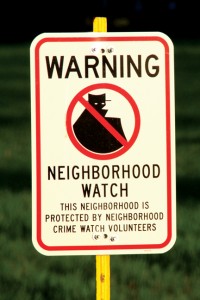 In the end, after individual stories were shared of criminal activity and the town’s response of experiencing a lack of applicants to an advertisement to increase the size of its police force, the 100-plus citizens in attendance along with town officials agreed on a plan to start a community watch program.

The opening hour of the meeting was spent by the Commissioners hearing the pleas of the citizens to increase the level of safety in the town.

Clara Parker, a victim of a breaking and entering crime, said she wasn’t alone in being concerned for the safety of Rich Square citizens.

“It’s almost every night that we learn of a break-in,” she stated, turning to acknowledge the large turn-out. “We are very concerned. We have a very small police department; our (Police) chief is doing all she can. She’s just one person. I would like to know why we do not have more police officers on duty. The county says that if we request the help, they will come and help us.”

Parker stressed that one of the latest crimes involved a gun being fired in the yard of the victim’s residence.

“We’re scared,” Parker said. “There was an elderly man and woman inside that house (where the gun was fired outside). I feel they (criminals) were coming there to hurt someone. This is a big concern for our town and it’s only getting worse. This is a matter of life and death. This town is not safe anymore. We need some help.”

Other Rich Square citizens, none identifying themselves, shared their concerns as well. When asked for a show of hands of those victimized by the break-ins, nearly 25 individuals responded.

One woman said her vehicle was broken into and items stolen early one morning. Another remarked that when she called for help (after spotting individuals in her yard); she had to wait for law enforcement personnel to respond from Jackson.

“It was 1 o’clock in the morning and I was all alone; my husband was at work; and it took 25 minutes for them (Northampton deputies) to get here,” she said.

Another woman said her vehicle was broken into and the thief stole her i-Phone and cash.

“I’ve got pictures of them; I’ve seen them walking up and down our street; why can’t they be arrested,” she asked.

A male victim said his home was robbed and ransacked on March 12, causing $10,000 in damage, to include the repairs made to his new truck that was also stolen and found nearby the next day.

“Then they tried to kick my door in again on the following Monday morning and fired a weapon in my back yard,” he said. “Ya’ll need to do something about this before somebody gets hurt or killed.”

Others told stories of individuals walking the streets of town looking inside residential mailboxes; having to wait long periods of time for a county deputy to respond when there is not a town officer on duty; and a noted escalation in criminal activity.

One citizen asked the Rich Square Commissioners how many police officers are on the town’s payroll.

“That depends because we get help from other agencies,” Mayor Doris Risper answered. “(Here in town) we pay for two, one full-time and one part-time.”

“What about at night; is there an officer on duty at night,” a citizen inquired, adding that she has spent a lot of money on installing yard lights. “This is costing the honest people.”

Risper said the part-time officer works at night, prompting several citizens to speak at the same time, saying that particular officer only works until 11:30 p.m.

“These break-ins are occurring at 2, 3 and 4 o’clock at night,” stressed Parker. “We need someone on police duty during those hours.”

Risper said the town is currently seeking to add two part-time police officers to the payroll.

“We’ve advertised these positions in the newspaper for two to three weeks and have received only three applications,” said the Mayor. “And if I showed you the ones I’ve got, you would understand why (they are not employed by the town). Maybe we need to go out of state and look for these officers; or maybe we need to go through an (employment) agency who pre-screens these officers and sends us the best applicants. The point I’m making here is that we are looking to add to our police force.”

Risper pointed out even if a police officer saw an individual walking the street at night and that person displayed proper identification (as a Rich Square resident) and not underage (the town has a juvenile curfew at night), there’s not much an officer can do by law.

“If they are a citizen, are of age, and have proper ID, it’s none of anyone’s business what they’re doing out there in the middle of the night,” Risper noted. “If they’re not loitering, then what are you going to charge them with?”

Another citizen said their vehicle was burglarized. Entry was gained by throwing an old water meter through the window.

“What are we doing to investigate the incidents that have already occurred,” she asked.

“All these incidents are being investigated,” said Altessie Taylor, who was sworn in Nov. 1 as Rich Square’s Police Chief. “We have developed suspects, but we have to be able to prove they were involved in these incidents. We can’t go on hearsay; we have to have solid evidence.”

“We’re in an emergency situation; I think it’s time that this town has 24/7 police protection,” said one citizen. “I know this can’t be done overnight. This council needs to come together and make that happen. If this council can’t do it, then maybe we need to find a council that can. If ya’ll can’t see that, then we do have a problem. If this council doesn’t do something, someone is going to get hurt.”

“I’ve been on this council for years, and see the same problems, the same situations each year,” said Town Commissioner Charles Eason. “We need your input at our monthly meetings to benefit the whole town, but we only see our citizens at these meetings when someone needs help.

“I don’t want anyone’s home or vehicle broken into, but we need to come together with a plan….what can we do as a community to help our police chief,” Eason continued. “We’re not looking at color; we’re looking at protecting each other. I would encourage you to come to our monthly meetings. You can hear the discussion we’re having to add police officers; to increase the number of (night security) lights; to hear the monthly report of our police chief of how she’s handling the investigation of these break-ins. We don’t have all the answers; we need your input.”

“It was mentioned that we need 24/7 police protection; that sounds good, but where is the money coming from to pay for that,” Eason stressed. “If we go up on your taxes, or your water bill, we hear all the grumbling. So how do we do it? We need to come together and figure it out; we can do this together.”

Taylor added there is a current effort to launch a community watch program within the town limits.

“We’ve been trying to get people to come to a meeting to start this program, but we couldn’t get anyone to show up,” she stressed. “We have to work together as a community to stop these break-ins; one police officer, or two, or three officers can’t do this alone.

“Let’s pull together and do this; let’s fix this problem together,” Taylor added to a round of applause from the audience. “If you are interested in community watch then put your name on the list and let’s get organized.”

One citizen said she was unaware of the town’s efforts to organize a community watch program.

“We need someone who has organizational skills to get this started,” she said. “It would have to be someone with the knowledge of how to set up this type of program. We need instruction on how to serve. Once the word gets out to those criminals that we’re watching and calling in (to law enforcement) with the information of what we’re seeing, then maybe we’ll see a decline in these break-ins. Right now, criminals are looking at us as an easy target because nothing is being called in until after it happens. We need to get organized for community watch and we need to show up at our council meetings every month and help in any way we can. We’re a small town of only 900 people; where are we going to get the money to hire enough police to give us 24/7 protection? But the community watch will see them.”

Currently, Town Commissioner Marsha Majette is the Community Watch program leader. She said her effort to get the program off the ground actually began last summer.

“My thing is that anyone who will let me in their house when I knock on their door, I’ll explain the program to them,” Majette said. “I kind’a got cut off when I started back in March, after all the cold weather, when it was said that if the citizens wanted community watch, they would contact me.”

Majette added there were posters at the Town Hall – on the door and at the window where water bills are paid by walk-in customers – advising of the program. Those posters, which contain Majette’s contact information, were also stapled on poles outside the Town Hall.

“I’ve called the Sheriff’s Office and left a message with those there in charge of helping to set up a community watch program, but I haven’t heard back from them,” Majette said. “In the meantime we need to get ourselves organized and set-up a meeting to get this program off the ground, but we still need the help of the Sheriff’s Office.”

Following some discussion, that organizational meeting was scheduled for 7:30 p.m. on Tuesday, April 28 at the Town Hall.

Those needing additional information are encouraged to contact the Rich Square Town Hall at 252-539-2315.