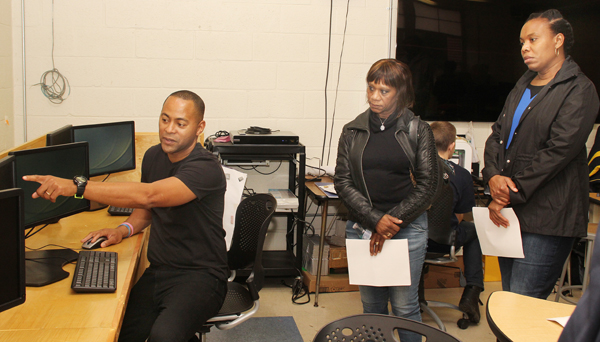 WINTON – The possibilities are endless.

So is the passion.

In a first for a North Carolina high school, C.S. Brown STEM (Science, Technology, Math) has introduced a 3D Design Program, one which opens new doors for its graduates, possibly leading to employment in this newly emerging job market. 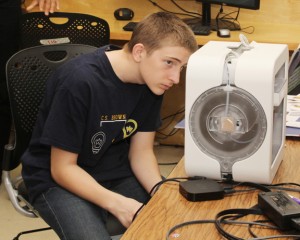 STEM student Brandon Jager watches closely as a device scans a 3D image of a project he designed. Staff Photo by Cal Bryant

Jeffrey Epps, the Director of Technology for Richmond County Schools and recipient of the 2013 “Champions of Change Award” from the White House, helped to lead a parent/student information session at C.S. Brown on March 28. Epps was at the forefront of developing tutorials at the elementary, middle school and high school levels, involving math and science, which allow students to use this type of technology so they can better understand how 3D can be visualized in those subjects.

He convinced a 3D product company to donate 10 printers and four scanners.

“We want to start exposing these students to this exciting technology now, even as early as kindergarten, so by the time they graduate this will be a part of the real world,” Epps said of 3D applications.

He has witnessed double-digit increases in standardized test scores by students who have already been introduced to 3D technology.

“We know it works,” he stated. “Now we’re looking down the road at the potential job market for those exposed to this technology.”

Epps told the story of an eighth grader who was introduced to 3D design and technology.

“He kept learning, all the way to the 12th grade,” Epps recalled. “He applied for a job on the 3D Systems website; he was called for a phone interview and they were so impressed with what he knew they called him in for a face-to-face interview. He was hired one week later; 18-years-old and $45,000 a year (salary) to start and full benefits.” 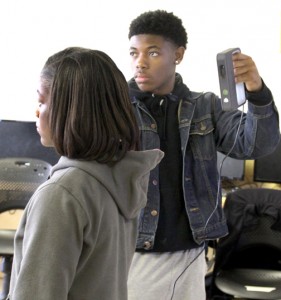 To begin the process of creating a 3D image, the subject matter must first be scanned, which is shown here between STEM students Beirra Sutton and Deshawn Majette. Staff Photo by Cal Bryant

Epps said this type of technology is the wave of the future for manufacturing.

“You have Nucor Steel here in your county; this is their future as this technology is very capable to scan and print 3D steel models,” he said. “If this school system is producing workers that know how to do that even before they graduate, that’s a tremendous partnership waiting to happen.”

Andy Canady is a retired principal and Assistant Superintendent for Onslow County Schools. He’s now in another line of “education” – that of introducing 3D technology to school systems.

“The kids love this, and they are seeing the benefits as those involved with this technology are seeing their grades vastly improve,” Canady noted. “The great thing here at this school is to work first with ninth and tenth graders with the 3D printers and by the time they graduate they’ll be proficient to the point, and earning a certificate to boast of that proficiency, where jobs are available. There’s a big job market now for those with knowledge of 3D printers. That job market also includes the design of 3D games.”

The next step in this emerging technology is one that Canady promises will “blow your socks off.”

“Microsoft and Facebook are now working on a project involving 3D goggles,” he said. “It’s all about virtual reality….you put the goggles on and will be inside the scene of an event; whether that’s a simple field trip or a trip to outer space. The images will be wrapped around them, like they are really inside the image. The whole thing is that they are learning, and that learning accelerates within activities such as this.”

Canady is the founder of T.I.L.T. Education, a business that not only focuses on bringing new and innovative technology into schools, but also training staff and faculty on how to facilitate instruction through the use of technology.

“One thing I learned from my time in education is that it’s not the number of meetings you have every week that will make teachers successful in educating students, it’s about getting effective tools into the hands of teachers. Since putting this technology in schools and seeing the success it brings, I have become even more motivated to help districts across the state improve their test scores and achieve educational excellence through the use this technology.”

The group assembled to learn about this exciting technology had a chance to visit the new 3D Theatre at C.S. Brown. There, equipped with 3D glasses, parents and students were taken on a voyage where the possibilities within the job market were endless.

In asking students about their future plans – with answers ranging from the medical field, engineering, movie animation, computer programming, and criminal justice – Epps said all those, and more career paths, will soon ride the wave of 3D technology.

As an example, he noted how a 3D model of a diseased kidney could be crafted and printed in order for surgeons to closely study how to operate even before making the first incision.

“The possibilities are endless,” Epps stressed. “3D technology is taking every major industry by storm. It is quickly becoming the preferred design tool for engineers. It is revolutionizing the manufacturing industry. We have the tools for students to learn how to develop 3D models and objects with 3D scanners, 3D printers and software. Students will participate in the excitement of this technology while tapping into their imagination and preparing for jobs in the future.”

Both Epps and Canady said this technology is great for STEM programs.

“The hands on practice the students will get in an area where there is a high demand for jobs of the future in animation, modeling, physics and dynamics will lead them to lifetime successes,” Epps said.

The benefits of such technology and how they translate into improved test scores is what piqued the interest of Dr. Perry.

“Hertford County Public Schools is one of very few districts that possess this technology. Three – dimensional or 3D technology offers a wide array of possibilities in almost every walk of life. The technology has begun to transform the way curriculum and instruction is designed and delivered,” Perry stated.

He added that simulations/3D technologies are beginning to be used in many areas of study, including education. “Simulation is viewed as a valuable addition to traditional teaching methods,” Perry remarked. “Simulators provide a structured learning experience, permitting practice without danger to the participants, and simulators facilitate the teaching of rare or unusual courses and cases. Simulators can also be used to provide an objective assessment of skills.”

Another key to offering this sort of technology is that competition in education has made it critical that public schools maintain an educational edge and/or innovate to address future challenges. Online three-dimensional (3D) virtual worlds are emerging technologies that offer unique alternative learning opportunities to traditional education. Colleges and Universities already utilize this technology to reach students.

“Students will be a part of gaming, an emerging instructional technique that will give them a competitive edge into many evolving industries. What I love most is that students will be able to design techniques and forms to make it easier to solve mathematical equations or other educational disciplines,” Perry concluded.

There’s an old saying when a new technology is introduced that “the sky is the limit.” With 3D technology, there is no limit.