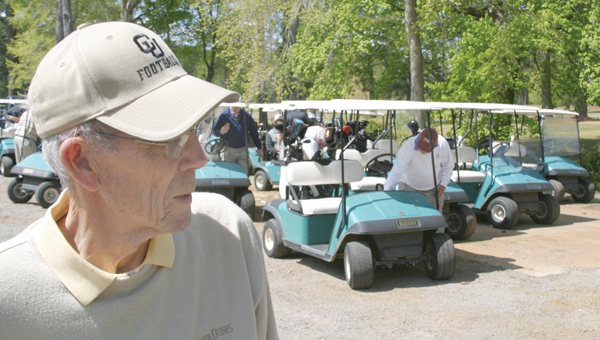 Jim Garrison wore multiple hats during his 50-plus years of service to Chowan University. He is shown here in a photo taken at a fundraising golf tournament at Beechwood Country Club he staged every year for Chowan. File Photo by Cal Bryant 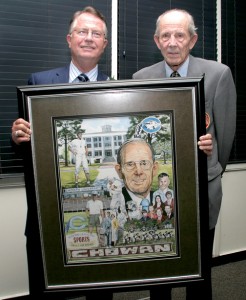 In 2008, Chowan University paid tribute to Jim Garrison by renaming its Sports Hall of Fame, in which he was inducted in 1987, in his honor. Coach Garrison is shown here receiving an artistic montage of his life’s work from Chowan President Dr. Chris White. File Photo by Cal Bryant

“Chowan lost its first citizen with the passing of Jim Garrison,” stated Chowan University Vice President for Athletics, Ozzie McFarland. “He was a true friend to me and really helped my transition into the athletic director position at Chowan. His position with Chowan’s history was secure but he still took countless hours to make me feel welcomed and informed.”

When a long-time, beloved college coach passes away, what deems being penned a legend in the coaching ranks? Surely it cannot be based on wins alone. Any coach can win games. 185. That’s how many wins Coach Garrison posted during his 37-year stint as head football coach.

However the wins are not what count after it’s all said and done. The legend is made in the space between, in those grueling losses, those long office chats, those tough, hot practices, the multitude of drills based solely on developing skills that could not just aid in carrying a football down field but also aid in carrying yourself down field in life.

The legend is made in the sharing of memories, the idle chit chat among friends, the extension of a hand to lift someone off the ground, the embrace of love and respect, and the knowledge that someone will always have your back. That was Coach Garrison. He embodied the very spirit of all the qualities he wanted to see in his players, his staff, and his friends. He, by any definition, is a legend.

“Coach Garrison helped mold all of his players, whether first team or third team, into the best players and people that we could be,” said former player and friend Harvey Rhinehart. “All of us owe him a huge debt for what he did for us. He was a living example for us in helping become the best that we could be.”

If Coach Garrison was hard on you it was because he loved you. And if you were loved by Coach Garrison he never forgot you. His mind was a rolodex of former players, former employees, friends, and family and at any time he could recite names, years played, hometown, and any pertinent statistics. He was sharp like that. He was always ready to tell stories about his former players detail by detail as clear and vivid as if it had happened just the day before. 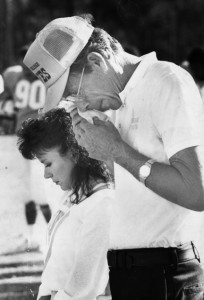 Jim Garrison sheds a tear after coaching his final game in 1998. During his 37 years as Chowan’s football coach, Garrison won an impressive 185 games, which at that time ranked him among the top three all-time winningest coaches in the history of the National Junior College Athletic Association. File Photo by Cal Bryant

“It is not unusual for players to have a special relationship with their coaches but it is unusual for this feeling of connection and love to stay with them throughout their lives. Coach Garrison loved coaching and he loved his players. His players loved playing for him and they loved him. That is about as good as it gets,” Jim McGill, member of the 1961 Chowan football squad and ChowanUniversity’s Jim Garrison Hall of Fame.

Coach Garrison gushed about his former players in an interview given on a special night in September of 2008 when he was honored for his service to Chowan.

“Some folks will say that old Garrison over there at Chowan had twenty-some players compete in professional football and had thirty-some players become football All-Americans,” he stated that night. “While I’m proud of those who achieve those goals, I’m just as proud of the thousands of other players who went on to become doctors, lawyers, teachers, preachers, bankers, musicians and the like. They are enjoying successful lives and it all started for them right here at ChowanUniversity.”

When someone who is as loved as Coach Garrison passes on to the other side wrangled thoughts and rampant grief fill every space of the heart. But in uneven time the grieving heart will be reminded of the joy that came in the sweet and special memories Coach Garrison left those memories to those who called him husband, brother, dad, coach, and most of all, friend.  His memories are his gift to all who crossed his path.

Coach Garrison’s love for his players and for Chowan was deep and it was passionate. But he became overridden with pride when speaking about his family. His wife, Joyce, and her support of his career at Chowan was something he held close to his heart. He spoke often of his son’s coaching career and how his daughters were always on the sidelines of every practice and game helping where ever needed. He was proud of his grandchildren and each of their endeavors.

Coaching and working at Chowan was a family affair for Coach Garrison. In September of 2008, Coach Garrison was honored by Chowan University President, Dr. Chris White, for his service to the school. On the night of receiving this high honor Coach Garrison is quoted as saying, “Chowan has been my life. This is where my family grew-up. I can’t picture myself anywhere else.”

Jim Garrison’s name will forever resonate throughout the halls of his beloved Chowan.  He helped hone her history and set forth a course to follow for the future.

“Coach Garrison and I go all the way back to our Gardner-Webb days,” stated White.  “He was a great friend then and remained so until the time of his passing. I am elated to be hosting his celebration of life on our campus, the place he loved so much.”

“I knew Coach Garrison long before my days at Chowan,” said Stan Dixon, a former Garrison player and now local entrepreneur. “Coach Garrison coached an All-Star Pony League travel team that I played for in Murfreesboro as a kid. So early on I knew what he expected of his players, even in little league. He taught me, and all of his players, that hard work never hurt anyone. He was a great man that influenced a lot of people. He carried a lot of people down the right road.”

“I felt the best way to repay what was done for me as a child was to go out and help young men, show them there is someone, other than their own family, that loves them and cares for them,” Coach Garrison said once in an interview.  “I wish I could do that for 50 more years.”

Wins and losses come with every coaching position. Coach Garrison tallied 185 career wins in 37 years as head coach for the Chowan football program.

But it is his last victory that is the most important. Victory # 186, his victory over death. His life continues now in Heaven and surely by now, he has assembled his team. He will continue to spread his love, his wit, his stories, and his zest for life eternally.

ChowanUniversity will be hosting the visitation, service and reception for Coach Jim Garrison, Sunday, April 12, 2015. Garrett-Sykes Funeral Home is managing the service arrangements.

Visitation will be held from 12:30-2:30 p.m. at the Pond Football Center, located just beyond the west endzone of Garrison Stadium.

Funeral services will follow at 3 p.m. in the stadium. All former players under Garrison’s tenure will be seated on the field level of the stadium along with the family. All others are asked to be seated in the stands during the service.

In lieu of flowers the Garrison family asked that contributions be made to the Jim Garrison Scholarship Fund set up through the Chowan University Development Office, (252) 398-1233.