MURFREESBORO – The tour began with a hand shake from a man who is not only a friend to this newspaper, but a friend to Murfreesboro and the Historical Association as well.

Brinson Paul, a man rich in knowledge and a leader in our community, took this reporter on an adventure rich in Americana! Americana by definition means: materials concerning or characteristics of America, its civilization, its culture and things typical of America. That doesn’t sound interesting to you? Prepare to be proven wrong! 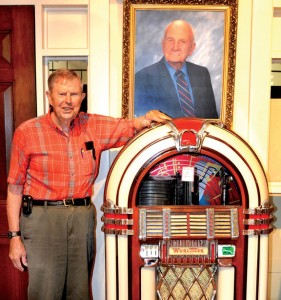 Brinson Paul stands with a vintage Wurlitzer jukebox, among the 13,000-plus on display in the Brady Jefcoat Museum in Murfreesboro. Mr. Jefcoat is shown in the portrait. Photo by Tim Flanagan

Mr. Brady Jefcoat started his collection over 35 years ago and with a lifetime of vigor had built an amazing collection from all corners of the country. Museum officials from around the world have visited the Brady Jefcoat in hopes of obtaining pieces from his collection. However, he wished to keep his collectibles together for others to enjoy. Historic Murfreesboro is indeed fortunate to have received the donation of this extensive collection of Americana.

There are over 13,000 items on display representing the past and the cultural evolution, such as music, dog driven washing machines, entertainment nostalgia, the animal room, priceless American antiques, weaponry from all eras and surprises we have taken for granted over the years, but would surprise you to know their origin.

You could snap hundreds of pictures of the amazing things inside this Museum and still not even make a dent in this incredible collection. The easiest way to describe this special Museum is to reflect on history. We always see, hear and learn about key moments in history, moments that defined, moments that created or built or moments of destruction. This is what most museums hold…the big, the important and the extravagant. However, this museum is so important in its own way because it is a journey of our America and how we lived, worked and survived through the decades. It makes us think and imagine how life was and how far as a country we have come.

Brinson as a tour guide was knowledgeable and enjoys his job immensely. Again what you read here is only a small fraction of the treasures the museum houses. We saw washing machines from way back that made you realize how inventive the American spirit really is. One of the coolest ones was a dog driven machine. It wasn’t a fluke either. There was a full line of them, and it was actually a prestige thing to have someone over and show them your new washer and the dog powering it. Then there’s the animal room…it contains decades of master taxidermy depicting hundreds of animals, fish and birds indigenous to this country. The way it was laid out with the windows behind some of the displays made it very realistic and almost animated.

Nostalgia of all kinds was everywhere…records of all kinds and from all eras including rare Victrolas and amazing recording devices similar to paper Braille that were the cornerstone of modern recording. There was a gorgeous brass harp from England

There were toilets too weird to believe. Wrinkle your nose at the prospect of using an out house? You should see the smartest to the craziest sinks, toilets and bath tubs you’ve ever witnessed.

If truly beautiful antique furniture is your gig, then you will love the bed room, dining room and parlor displays full of historic treasures and some famous such as the stunning red couch from “Gone with the Wind”! There were kitchens that made the “Honeymooner’s” kitchen a dream.

You can spend hours in the music and nostalgia area. There were records there that I have not seen since my teens. The Jefcoat Museum has records, albums, 45s, posters and just about everything from every era. Even the RKO dog was on hand to greet us as we came in.

Other display rooms includes a Smithy Shop, historic farm tools, butter churns, bicycles, saws, an antique auto repair shop, tool shop and a very cool cobbler shop. It was all very authentic and very interesting as you learn hands on about artisan trades and its progression through America’s timeline.

Just about any trivial item from the past is symmetrically displayed for amusement and education. Toasters, postage machines, lamps, salesman props, hats, drapes, salt and pepper shakers, Americana plates and dishes. Cigar boxes, magazines, inventions, irons, organs, violins and the list goes on and on…hallways full of interesting what nots, short lived ideas and staples from our history.

The Jefcoat Museum is a massive and wonderfully laid out facility with rooms and catacombs…. A “hidden treasure” located in cozy historic Murfreesboro. Anybody planning on a trip to the Jefcoat will not be disappointed!

This reporter could probably write a book on the Jefcoat Museum, the man whose collection it displays and the history of our nation within, but of course this is not a book. Plus it’s better to come see for yourself and have your own experience. Sometimes something is as simple as black and white…however in this case every individual that visits the Museum will have a different experience based on one’s own life and perspective.

From the beauty and workmanship displayed, to the old and rusty, to the ingenious and innovative, and to the weird and why did they invent that? There is something for all ages to admire and enjoy at the Jefcoat! You can always check out the Jefcoat Museum on May 16 when it hosts the 14th annual Roanoke-Chowan Pork Fest.

Before or after that date, call 252-398-8054 to schedule a tour of the Jefcoat Museum, located at 201 West High Street in Murfreesboro.