AHOSKIE – Bertie High erupted for four runs in the top of the seventh inning, then  held off a Bears rally in the bottom of the frame; and went on to beat Hertford County 8-5 in a Northeastern Coastal Conference baseball game here Tuesday night. 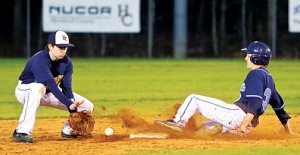 Bertie’s Michael Scott (right) slides safely into second base ahead of the throw to Hertford County shortstop Bradley Edwards in Tuesday’s game. The Falcons came back to top the Bears 8-5 in this hotly contested rivalry game. Dynamic Photo / William Anthony

Bertie opened the game with a run in the top of the first inning.  Leadoff batter Matthew Weaver reached first base on an error and promptly stole second.  Weaver then scored on Alex Harmon’s RBI double into the gap in right centerfield for the first run of the game.  The Falcons might’ve had more in the inning, but Bertie pinch-runner Greg Williams was thrown out at the plate trying to score on a two-out single.  It was 1-0, Bertie, after a half-inning of play.

Hertford County took the lead in the bottom of the first when they scored a pair of runs. Wyatt Waterfield drew a walk and one out later Slade Cowan hit a towering shot over the left-field wall for a two-run home run and the Bears led it 2-1 after the first.

Hertford County got another run in the bottom of the second when J.J. Gatling walked and Bradley Edwards singled to center to get two men on base.  Edwards was out on Slade Cowan’s fielder’s choice, but Gatling was able to take third.  Trent Munford entered the game running for Cowan as Bears coach Chris Towell called for the double-steal.  Munford stole second as Gatling stole home and it was 3-1, Hertford County, after two innings.

Bertie came back to tie the score with two runs in the top of the third.  Tommy Cowan had an RBI single and Jaycob Damo contributed an RBI infield single.  Those two scores knotted the contest at 3-3 after two-and-a-half innings.

Bertie went ahead in the top of the fourth.  Back-to-back doubles from Weaver and Scott produced a run that made the score 4-3, Bertie.

Hertford County answered in the bottom of the frame as Gatling walked, stole second, took third on an error, and scored on a wild pitch.  That tied the game at 4-4 after four innings of baseball.

The Bears went back in front with a run in the bottom of the sixth.  Gatling singled to center and stole second to get into scoring position for the home team.  Edwards then ripped a two-out RBI double into right-center, scoring Gatling, and Hertford County led it 5-4 going into the final inning.

But Bertie made a Bears’ celebration premature with four runs in the top of the seventh.   Weaver led off with his second base-on-balls of the game, stole second and went to third on Michael Scott’s infield base hit.  Harmon then cracked his second two-bagger of the game, good for an RBI that scored Weaver with the tying run.  Scott, held on third on the previous play, then scored the go-ahead run on a wild pitch.  Cowan followed Harmon’s double with a run-scoring two-bagger of his own, scoring the latter, and making it 7-5. Jacob Damo then got a one out single to short that made it 8-5, Bertie; but the Bears had one more chance.

In the bottom of the seventh, with one out, Chris Adams drew a walk.  After another out, Nick Adams and Munford also drew walks to load the bases.  But neither would make the 90-foot trek home as a groundout ended the game and sent the Falcons to their fifth win of the year.

Harmon pitched five-and-two-thirds innings for the Falcons and gave up four runs on five hits, but he also had 11 strikeouts.  Cody Matthews pitched the final inning-and-a-third and picked up the win in relief.  Slade Cowan pitched five innings for the Bears while Nick Adams went the final two innings and was saddled with the loss.

Bertie had 13 hits: three of them by Damo. Scott, Harmon, and Cowan had two hits apiece while Weaver, Matthews, Lance Freeman, and Archie Wesson had one hit each.   Edwards had two of Hertford County’s five hits with Chuck Lee, Slade Cowan, and Gatling having the other ones.

“My hats off to Hertford County,” said Bertie coach Bobby Harmon, “they played a great game.  I’m proud of my team for the way that they fought because I knew it was going to be a tough game.  Anytime these two teams play you know it’s going to be a dogfight.

“We had a great effort,” said Bears coach Towell.  “We made a few mistakes and Bertie took advantage.  Slade and Alex both pitched well; but in the end, you can’t give the other team extra outs.”

Bertie is now 5-4 and 2-2 in conference play.  The Falcons are off for Easter break until they play Southampton Academy April 8 in the first round of the Tarboro Easter Classic.   Hertford County is 2-4 overall and winless in league play at 0-3.  The Bears will be on the road Thursday (tonight) at Pasquotank in a game with a 7 p.m. start in Elizabeth City, before they’re off for Easter.