JACKSON – Despite not having the money committed to the project, the Northampton County Board of Education remains steadfast in their quest to build a new centrally located high school.

Last week, School Board members and local public school officials presented five potential sites for a new high school during a joint meeting with the county’s Board of Commissioners. 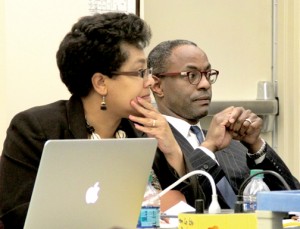 Northampton Schools Superintendent Dr. Monica Smith-Woofter is joined by School Board attorney Rod Malone as they listen to last week’s discussion at a joint meeting of school officials and the county’s Board of Commissioners. Staff Photo by Cal Bryant

The new school, which has been the subject of debate since 2010, carries a projected price tag of $24 million. That number is from a January 2013 meeting between the county’s two elected entities.

Four of the projected sites are located near Jackson. The fifth is near Gumberry, property between Elam Church Road and NC 186.

Doug Miller, Executive Director of Auxiliary Services for Northampton Schools, unveiled maps of the five sites at last Thursday’s meeting. He said two of those sites are located very close to the county’s Cultural and Wellness Center, a facility on NC 305 North which boasts of several athletic fields.

“In the past these two boards have talked about ways to save money (on the project),” Miller recalled. “A couple of these sites can share facilities between the county and the school. It would help us, guide us on which properties we need to select if you guys (commissioners) let us know if you are interested in possibly doing a joint venture.”

Miller added that school construction planning includes how much land is needed.

“We can purchase a smaller amount of land if we can count on using the Cultural and Wellness Center’s fields,” Miller noted, adding that the state’s facilities guidelines calls for 30-to-50 acres needed for a school.

“With Property D was can share parking lots, athletic fields and we can build a gymnasium and football stadium that we could share with the county,” Miller pointed out. “It would make for a better use of taxpayer money if we could share facilities.”

However, Property D is only 24 acres and has limited road frontage.

Joe Barrett, Vice Chairman of the Board of Commissioners, said he would like to see more information on how the county and the school system can share the Cultural & Wellness Center facilities.

“We need a better understanding of time frames, the number of activities the school system would require of the Cultural & Wellness Center,” Barrett remarked. “Then we have to weigh that against the demands currently placed on the Center. Can we continue at the rate we are now to provide those services as well what the school is possibly asking here?”

Board of Education member Phil Matthews, a former NCPS Assistant Superintendent, said Property B was a favorable site years ago.

“The landowner was agreeable to sell it at that time,” Matthews said. “Of course we do not need to purchase the entire tract, just enough to build a new school.”

Miller said that particular site is part of the NC DOT’s future plans to widen US 158.

“We don’t see that as a problem, as a matter of fact it’s a plus for us as it gives us access from the old (US) 158 two-lane and the new (US) 158 four-lane,” Miller said. “We may need to work with DOT in the early stages (of the road widening process) so they design the road to fit our needs.”

“We would need 50 full acres there because we would need to build a new football field and baseball fields,” Matthews noted.

As far as Property E (the location near Gumberry; 159.4 acres valued at $118,119) is concerned, Miller said early investigation has revealed a possible lack of water and sewer capacity.

“We would need to investigate that issue a bit further,” Miller stressed.

The two boards discussed a draft timeline for the new school project.

“The School Board has not discussed any selection of these sites; this is just an administrative site selection,” said Matthews. “The draft timeline calls for the site selection to be made in August 2015. The way I look at it, in order for the School Board to meet that date we’ll need to hire an architect to evaluate the site, pay (the landowner) for an option to purchase agreement, and do soil testing. To do that we’ll need about $80,000.”

Matthews said he felt the School Board needed a commitment from the commissioners if the existing ball fields at the Cultural & Wellness Center are available or not.

“We’re not ready to make that kind of decision today,” remarked Fannie Greene, chair of the Commissioners.

“We need at some point start to get our hands around what is realistic to build a new school, so the school system can make realistic plans about what they’re going to do,” said Rod Malone, legal counsel to the Northampton Board of Education. “It seems as though one side of this table has expectations of when they will break ground (for construction) and the other side of the table has another expectation. I think both sides need to come together and really study the numbers (cost of building the school and the debt service payments).”

“We’ve got to come together and do this work,” said School Board Chairman Clinton Williams. “We need to meet more often. It’s such a long gap now between our meetings that I can’t see us moving forward. We’re having the same discussions we had two years ago. We’re not any closer to purchasing the land. We need to move forward and make this happen.”

Williams suggested that the two boards need to meet monthly.

NCPS Superintendent Monica Smith-Woofter said perhaps she and County Manager Kimberly Turner along with both board chairs and the county’s and school’s finance officers could meet frequently and report back to both full boards.

“So what I’m hearing is this smaller administrative group will meet and revise the draft timeline of this project and then the next time these two boards meet together you can present us a viable plan with realistic dates on it,” said Matthews.

That was the plan adopted by both boards.

The biggest question in the ongoing debate to build a new high school is how to pay the annual debt service (ranging from $1.2 million on a 40-year loan and $2.2 million on a 20-year loan) in what is projected as a $24 million facility.

Help is on the way