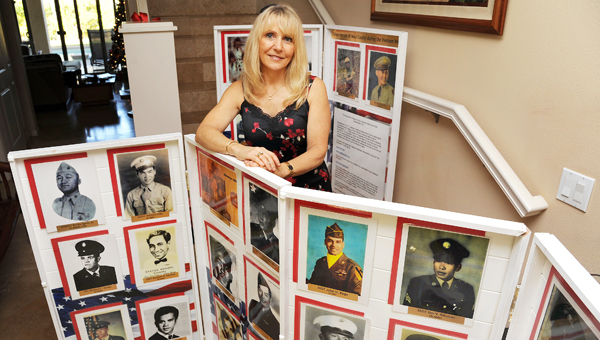 Janna Hoehn is shown here with a display featuring the photos and a brief life history of 42 men from Maui County, Hawaii who lost their lives in battle during the Vietnam War. Hoehn, along with two brothers from Fayetteville, are seeking the public’s help with finding the photos of six Vietnam causalities who were born and raised in the Roanoke-Chowan area. Contributed Photo

Janna Hoehn admits not personally knowing any American soldier that lost their life during the Vietnam War.

That fact, however, isn’t stopping her from joining a nationwide effort to place a photo with each and every name listed on the Vietnam Veterans Memorial Wall.

Hoehn, who for the past 25 years has lived in Maui, Hawaii, has teamed up with brothers Jim and Tom Reece of Fayetteville in their efforts to locate the families of North Carolina men lost in battle during the Vietnam era (1962-1975). 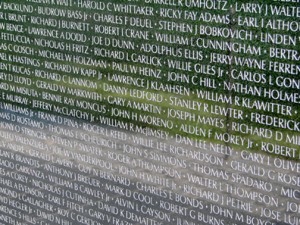 One panel of “The Wall” in Washington, DC displays just a few of the names of fallen U.S. service members from the Vietnam War. Contributed Photo

The efforts of the Reece brothers were featured in an article published last year by this newspaper. To date, they have obtained the photographs of 1,858 of the 1,929 native North Carolinians killed in the war.

“Putting a face with a name changes the whole dynamic of the Wall; it keeps our fallen heroes memories alive and will honor them. The stories and sacrifice of these heroes will never be forgotten,” said Hoehn during her correspondence with the News-Herald.

“If anyone is related, a friend or a classmate to any of the young men on the list, I would very much appreciate hearing from you,” she added. “Even if you don’t have a photo, but know which school any of these young men attended, it would be so helpful.

“We need to obtain a photo of every single soldier whose names are etched on The Wall, all 58,300 of them. To date we have over 40,000 photos. If you do not know any of the names that are listed from your local area, but you had a loved one or friend whom died in Vietnam, we may need his photo as well,” she stated.

Those having photos/information on the Roanoke-Chowan local heroes are asked to submit that material to Jim Reece at reecejim@yahoo.com. Reece will forward that material to the “Wall of Faces” online memorial with the Vietnam Veterans Memorial Fund, as well as in the future Education Center that will be adjacent to the Vietnam Wall in Washington, DC.

Hoehn is also seeking a local individual that would like to volunteer to do some footwork in his or her community if the effort to find all the photos falls short. She can be contacted at neverforgotten2014@gmail.com.

For Hoehn, her decision to join the national search for these photos came during her first trip to Washington, DC six years ago.

“Because Vietnam was the war that was going on while I was in high school, the first memorial on my list was the Vietnam Veterans Memorial Wall,” she recalled. “Even though I never knew anyone killed in Vietnam, I wanted a rubbing of one of the names. I approached the Wall and choose a name… Gregory John Crossman… an MIA.”

Upon returning to Hawaii, Hoehn decided to research Crossman and try to find his family, in the event they were never able to go to the Wall.

“I would send them the etching, hoping they would share a photo with me of Gregory,” she said. “Off and on for six months I researched every way possible and never found any family. I was quite disappointed. However I had one more possibility… my cousin, our family historian… six weeks later she found a college photo of Gregory.”

Two years later, Hoehn saw a story on the news about the “Faces Never Forgotten” for the Vietnam Veterans Memorial Fund. The goal was to put a face with every name etched on the Wall.

“I immediately sent in the photo I had of Gregory Crossman,” she said. “Days later I received an email from Jan Scruggs, the Founder and President of the Vietnam Wall. He thanked me for sending the photo; it was the first for this soldier and asked me if I could help him find the photos for the 42 Maui County soldiers that were killed in Vietnam. I told him it would be an honor.

“I have always hoped I could to do something for the Vietnam veterans because of the way they were treated when they returned home,” she continued. “Here was my chance.”

Using phone books, archived yearbooks for every high school on Maui, searching the obituary archives at a library, and visiting with the editor of the Maui News, Hoehn eventually succeeded in her six-month task of locating the 42 photos.

She also made a display of those 42 faces and took it on a local road trips to high schools, libraries and civic groups in Maui County.

“Once I finished finding all the Maui County photos, I moved on to my hometown in California and found the six soldiers from my childhood home, Hemet and San Jacinto,” she said. “I have been very involved in trying to locate photos of the Native American soldiers which brought me to start searching for all soldiers in California. Over 120 newspapers have run the story throughout Hawaii, California, Washington, Idaho and Oregon and Montana. The response has been amazing, I have collected over 1,300 photos since May 2013. With your help it will be more.”

Like the Reece brothers, Hoehn said the efforts spent on this project is well worth the time invested.

“Each and every one of our Vietnam fallen heroes deserve to be honored; it’s the least we can do,” she concluded.

For more information about the Education Center or make a donation to help build the Center, visit www.vvmf.org/thewall.