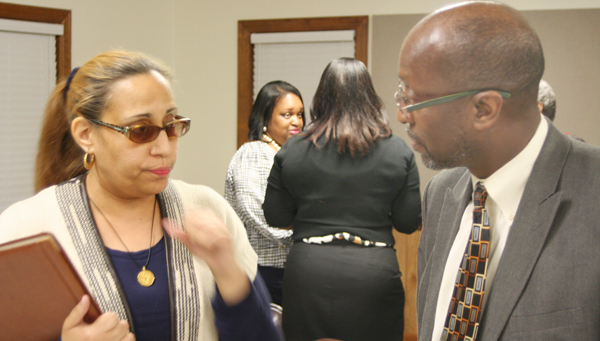 WINTON – As their announcement hand-out flyer states: ‘Let’s reason together’.

The second “Unity in the Community” forum was held Thursday evening in the Fellowship Hall of Winton Baptist Church; and if the turnout, both by the assembled panel and by the plain-folk citizens in attendance, is any indication, people seem ready to stand up and be counted as part of the solution.

The Forum sprang from an idea fostered by Rev. C. David Stackhouse, pastor of New Ahoskie Baptist Church and a member of the Ahoskie Town Council, along with David Shields, an Ahoskie businessman who also serves on the Hertford County Board of Education. Both men were concerned about social issues in the county, ones that had the potential to spark an event such as the ones witnessed over the past few months across the country from Ferguson, Missouri to New York City to Los Angeles to Milwaukee.

Hertford County Public Schools Superintendent Dr. Michael Perry, who along with Hertford County Sheriff Juan Vaughan, sponsor a Q&A weekly with both high school and middle school students, also bought into the idea and plans were developed to unify the local school students with law enforcement as well as bringing together members of communities in the county to seek ideas on how to best safeguard the public when there is a potential for civil unrest.

“When the stuff happened back in Ferguson, it killed my soul,” said Shields, first speaker for the forum that included school and college officials, law enforcement, community political and civic leaders and members of the clergy. “So I sat down with Sheriff Vaughan and said we’ve got to do something to keep our children safe, to keep your officers safe, because they’re just as much in jeopardy.”

While Shields said he regretted the Fellowship Hall was not overflowing (about 50 persons attended), he sounded the vanguard that these efforts will be continuing and ongoing.

Another panelist, Roanoke-Chowan Community College president Dr. Michael Elam, said  “We talk about ‘we-they’ all the time, but we are all the same.  When these officers take off their uniforms, they go home just like we all do.  A lot of good work has been started and we believe at the College that the more education we can get into our people the better off the community is going to be,”

“We have a lot to learn and a lot to do,” said Ahoskie Police Chief Troy Fitzhugh, who was attending his second Forum, as were Murfreesboro Police Chief Darrell Rowe, Sheriff Vaughan, HCSO Chief Deputy Raymond Eure, and Murfreesboro police officer Tyrone Ruffin representing law enforcement. “As we work together we plan on not just doing it for today, making sure the streets are safe, the kids are safe, and that the officers are safe,” Fitzhugh continued.

Bill Mitchell attended as not only Chairman of the Hertford County Board of Commissioners, but also in his role as a supervisor with the state’s Probation and Paroles.

“We get a lot of flack sometimes for funding certain entities like the schools and the Sheriff’s office a little more than others,” Mitchell said. “But these are just two areas where we realize the magnitude of what they mean to our county and that’s why we fund them as we do.”

Murfreesboro’s Rowe cited the cooperation between local police and county law enforcement, and challenged the citizens to do their part.

“We get paid for doing it full-time,” Rowe said, pointing about the crowd, “but you all have got to do it part-time as well.  If we don’t stand together we will surely fall apart.  If you work with us and we work together we can minimize what we have to do and we can do it much better.”

“The children’s program at the Martin Luther King celebration in Murfreesboro (last January) was sponsored by Chowan students, and it was very moving,” Harrell acknowledged.  “We pull in students from in-and-out of state, male and female, black and white.  Chowan can have a role serving this community.”

“Chaos accomplishes nothing, but unity always works,” Edwards said. “At our church we believe in loving one another and working with one another; and I believe all the churches believe that we can only do it the right way.”

Ruffin spoke of the influence law enforcement officers had on his youth with the Drug Abuse Resistance Education (DARE) program.

“Just to see the police officers there (at school), to see the lights on his cars, meant something because just look at me today,” Ruffin recalled. “Patrolling in schools does make a difference in a kid’s life.

Following forum panel discussions, Stackhouse called for dialogue and feedback from the public.

Rev. Michael Reid, chaplain of Ahoskie American Legion Post 102, spoke first and called on the participants to seek solutions from within.

“Everything has a core and everything radiates out from it,” Reid said.  “We have to get to that core if we’re going to solve the problems here in Hertford County.  We can’t solve them all, but they can get better.”

Another older audience member spoke up for law enforcement saying, “I applaud you for what you do in schools because there’s a difference dialogue from what existed in my day.”

An audience member inquired about a lack of recreation programs for youth.

“We won’t leave a child out,” Stackhouse commented. “We will try to meet every need, but parents must know that they have a responsibility as well.”

Shields said he hoped there would be an increase in summer programs, and spoke up for the Albemarle Regional Library as well as church after-school programs.

“Everybody’s making an effort,” he said. “It’s not as big as it could be.  There are things out there; we just have to figure them out.”

“The desire is there, and the effort is there,” added another audience member. “We can’t just have one volunteer; we have to all pitch in and contribute as a community.”

Perry closed out the hour-long meeting with a challenge to the audience on bridging the divide and enhancing respect for authority.

“Our children are hearing the truth, and that’s what’s making the difference,” Perry said. “They don’t play games, they tell the truth because that’s what you build relationships on.”

Perry said he hopes a Police and/or Sheriff’s Ride-A-Long program can be accomplished in conjunction with Senior Projects at Hertford County High School.

“Maybe we can influence some of our youngsters to grow up and want to be law enforcement officers right here in Hertford County,” he added.